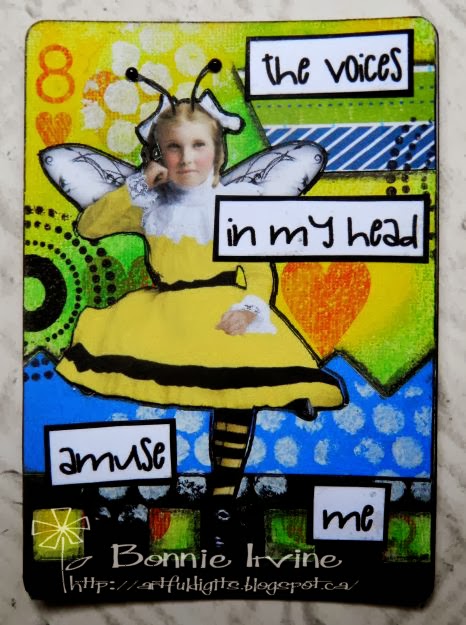 Here are the next three altered playing cards in my latest series. I seriously hope that the middle one doesn't offend anyone. It's just my wacky sense of humour at play. As previously stated, these cards were first inspired by The Spoken Soul, an Artful Gatherings 2013 class, that I took last summer with Mary Jane Chadbourne. I won't go into detail as to the backgrounds out of respect for her copyright except to say that I used my favourite ways to add colour: Neocolor II watercolour crayons, gelatos, and Big Brush Pens. The papers are from my scrapbox (or sometimes my desk if I'm between clean-ups). The first one has a quote that I often say to my husband, especially when I'm smiling or laughing for no apparent reason. He knows that something is going on inside that brain of mine. The image is from Hidden Vintage Studios and I've given Bonnie Bee (that used to be my nickname when I was a kid) two flat pearls to accent the ends of her antennae. The circle stamp is from Michael's $1.50 bin, and the stencilling is done with gesso through TCW's mini punchinella stencil. 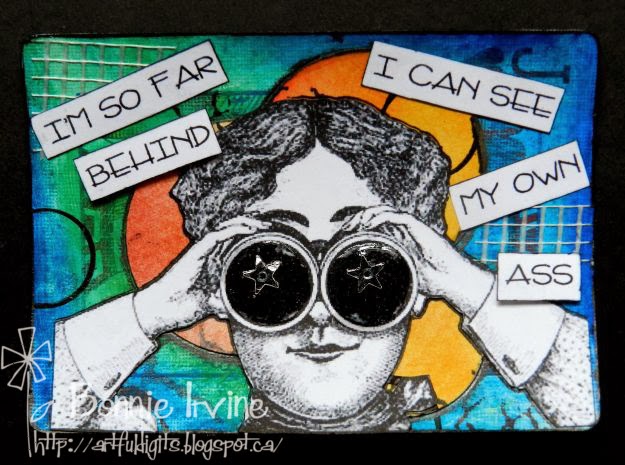 The second one is the one I hope doesn't offend you with the wording. The concept of being that far behind that you've been lapped by yourself makes me laugh...maybe because I can relate so well :) The circles were punched from a piece of scrap that had been spritzed with Dylusions ink sprays and water. The image was from the Internet but I cannot remember if it was Etsy or Graphics Fairy...it's very common and easily found. I filled her binocular lenses with Glossy Accents and placed a silver star sequin in the center of each. The mesh is drywall tape.All the wording on each card was generated  on the computer, some backed with foam tapeas well as black matting. 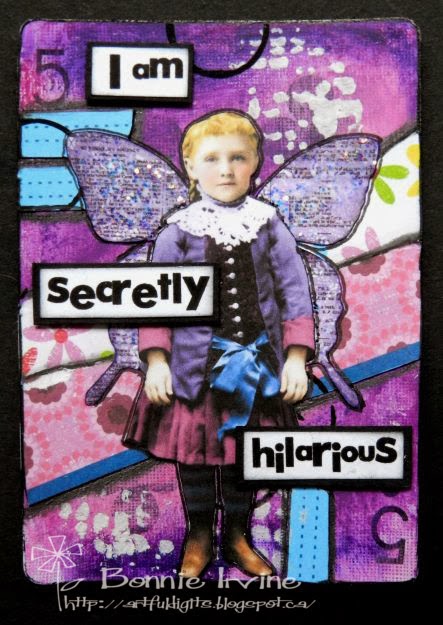 The third playing card also makes me smile. The little fairy looks so serious but also has that expression on her face that says she knows something we don't. This could be me. If I don't know you well or the situation calls for it, I can come off as quiet and serious. However, there is a whole other side to me that often surprises people until they know me better. Just ask my husband or my sister...lol. They are always saying "If people only knew..." or "you know, you appear to be normal...". So fun inside my head :) Anyway, the image is also from Hidden Vintage Studios and I have added Icicle Stickles to her lovely wings. The stencilling is done with gesso through the TCW Well Rounded stencil. All three are edged with Black Big Brush pen and doodled/outlined with a black Sharpie pen.

Thanks for stopping by today. You know how much I value that...so awesome. Have a wonderful weekend. I hope you get a chance to play.

These are just so much fun. I'm loving the trip inside your head---the humor, the whimsy, the imagination. Wish we could meet in person---this Bonnie B is a hoot!!!