I found this week's combination of Bugaboo Stamps as our Craft Your Passion sponsor and the challenge theme of  Show Us the Funny to be completely irresistible...so much so that I made two cards instead of just one. What can I say? I love Bugaboo images and quirky humour. I coloured both images, Stella Fairy Visit and Flowers Trio, with Prismacolor pencils. 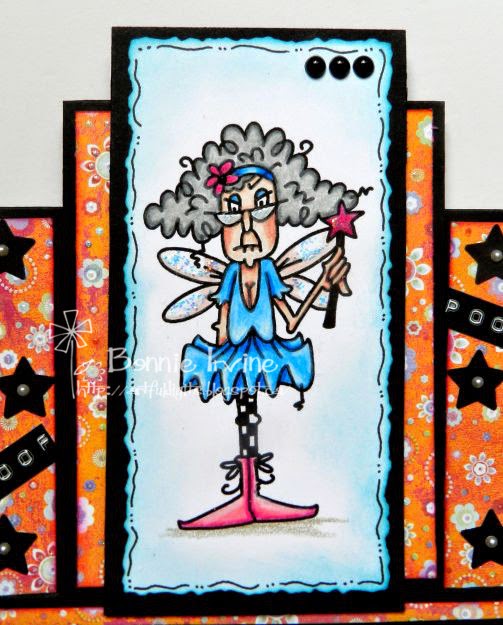 The Stella image was cut out with Spellbinders Deckled Mega Rectangles Large and then inked around the edges with Broken China Distress ink. The flowers image was cut with a SB Labels One die and edged with Black Soot Distress ink. Both were matted with black cardstock and doodled on with a black Micron pen. 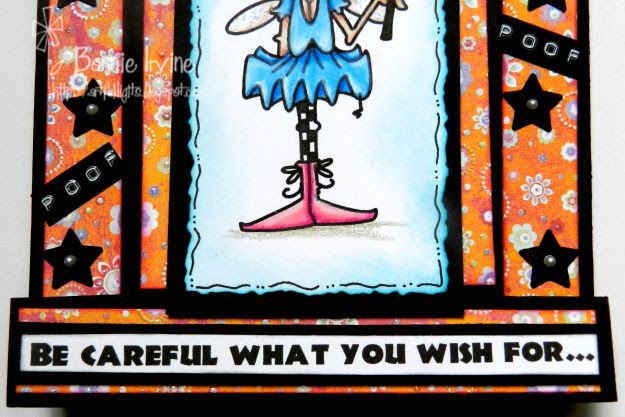 Stella's black card base was cut, scored, and folded into a center step card. The lightly glittered patterned paper comes from DCWV's The Posies Stack and was cut slightly smaller than the spaces so that a black mat would be visible and contrast with the DP. Small black stars were punched, adhered to the side panels and embellished with white half pearls. The word Poof, which just happens to be the noise Stella the Fairy makes when she magically appears, was printed twice with a Dymo labeller. The sentiment was computer generated and matted in black so it would have the same weight and impact as the image and panels. Three black half pearls were adhered to the top right of the image panel. Icicle Stickles were applied to Stella's wings and wand. Glossy Accents on her glasses give them shine and dimension. 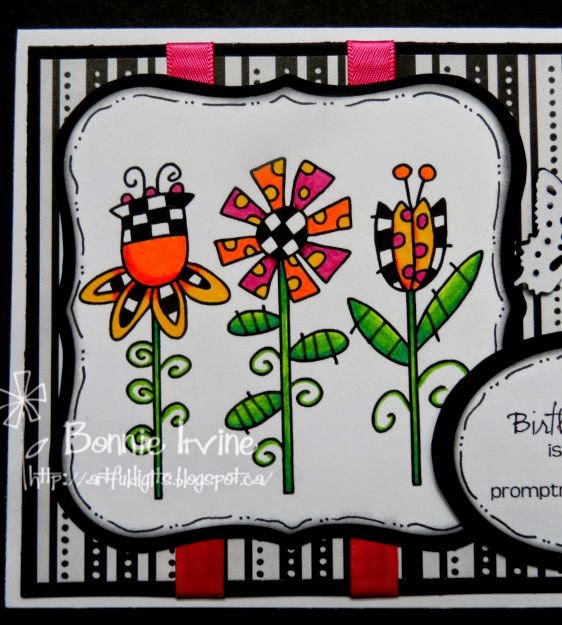 The flower card has a rectangle of black paper from my stash backed with black cardstock. The corner of both was rolled over a large paint brush handle to give it curve instead of folding it. The very tip was held down with a button brad which allows the corner to still have dimension since it pops up near the flat edge. Two lengths of fuchsia satin ribbon were wrapped to the back of this layer before the image was adhered over top. 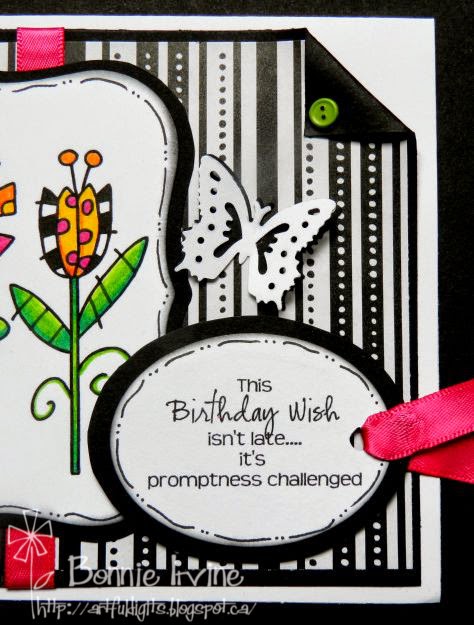 The sentiment from Create With TLC was printed on white cardstock and cut with an SB Classic Ovals Large die before being doodled around, matted in black, and popped up on foam tape. A hole was punched with my Crop-o-dile and another length of the same ribbon was threaded through it. A double layered butterfly was cut with an EK Success punch and stacked with the black solid one on the bottom. They were only adhered to each other at the body, allowing the white wings to lift.

Thanks for visiting today for this two-fer. When you get a minute, stop over at the Craft Your Passion Challenge blog to see the humourous creations from the rest of our talented DT. We'd love to have you join us for Challenge 212 and to have you Show Us the Funny!

I am entering the Stella Card in the following challenges:
Addicted to Stamps ~ #81 Things with wings
Catch the Bug ~ May Anything Goes
613 Avenue Create ~ #70 Anything Goes
Quirky Crafts ~ #9 Something Beginning With S (Stella)
Sweet Stampin' Challenge ~ Fairies or Fantasy

I am entering the Flower Trio card in the following challenges:
Catch the Bug ~ May Anything Goes
Dragonfly Dreams ~ #5 How Does Your Garden Grow?
The Ribbon Girls ~ April  Card Challenge  Ribbons & Flowers
Allsorts ~ #257 Butterflies
Crazy 4 Challenges ~  #234 April Showers Bring May Flowers

Thanks for joining us at Dragonfly Dreams and I hope we see you again soon!

This is just lovely for our Butterflies theme Bonnie, thank you so much for joining us at Allsorts challenge this week.

B x (My Grand Calibur candy runs until the weekend here

This is so gorgeous. Thanks so much for joining us at ATSC. Hugs, Nicole

Fab cards Bonnie! Thank you so much for joining us at Allsorts this week for our Butterflies challenge x

I really like your center fold card...it's too cute!

Thanks so much for playing along with us @ 613 Avenue Create & hope to see you back again for our next challenge!!!!!

Love both your cards Bonnie but especially the bugaboo stepper card, it really made me smile!! Thanks for joining our Fairies and Fantasy challenge at Sweet Stampin' and hope you'll join us again soon! Love Jacky x

great cards! thanks for joining us this week for our Anything goes challenge at Catch the Bug!

Gorgeous cards, Bonnie! Love your coloring and choice of colors! Thank you so much for linking up with us in our “May Anything Goes” challenge at Catch The Bug! Please join us, again, next time, for a new challenge and more chances to win! ~~Sammibug~~ DT Member For Bugaboo Stamps

Hi! I followed the link from Catch the Bug Challenge Blog to find your blog. The bold colors with black on your Stella card caught my eye. I also love the little doodling you add to the frames of your die cuts!

So I just signed up to follow your blog! Thanks for the inspiration!

I'd count step card, sentiment, stigma, stamen, stars, and it made me smile too! Lovely creation for our S challenge just finished over on the Quirky Crafts Blog! Thank you so much for joining in! Winners will be posted later...
((Lyn)) DT

Lovely flowercard you made and great colorcombinations! =)
Thanks for joining us at Dragofly Dreams!
Hugs, Elenor DT