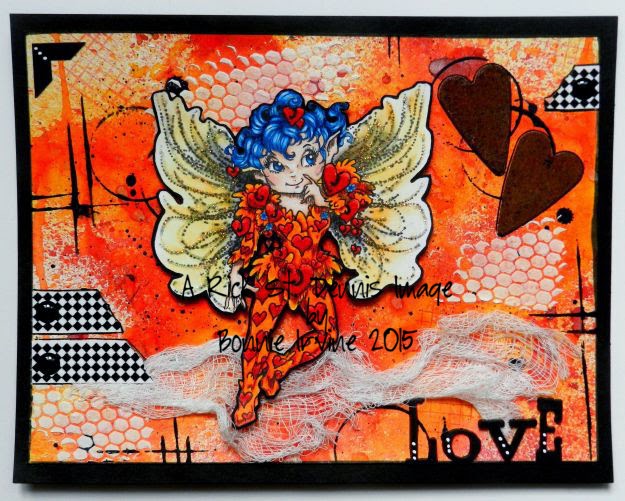 Hi everyone. We are starting Part 2 of the Progressive Challenge at Rick St. Dennis' Sparkle and Glitter blog. If you played along last month in Part One, you will have received this absolutely adorable image called String of Hearts Fairy. I absolutely love how mischievous she looks. If you didn't get a chance to play last month, you can still play this time since the image is available for purchase at Rick's Zibbet shop. 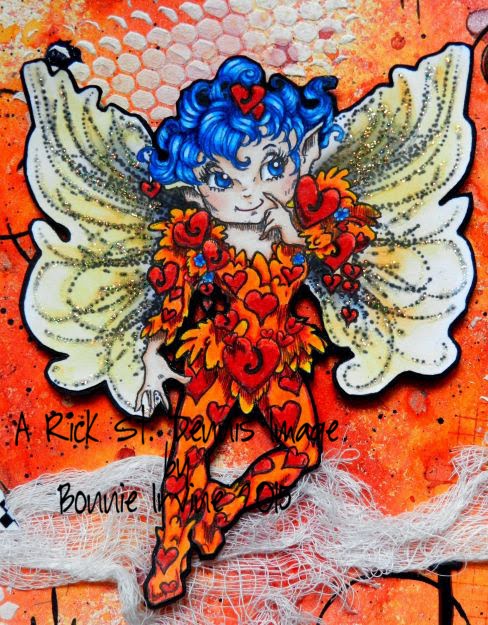 I coloured her with Prismacolor pencils and a few Polychromos for the face shading. The wings were coloured in with Pan Pastels and then Diamond Stickles was added to each line to give fabulous definition and magical sparkle. She was fussy cut and then matted with black cardstock before being trimmed again. 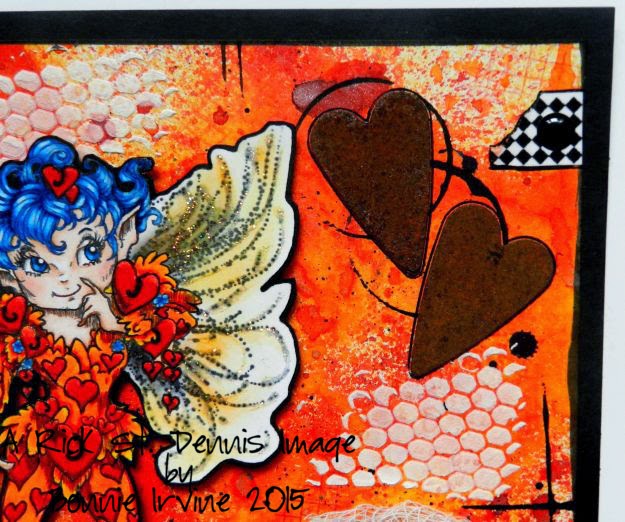 The background began with a 6x8 rectangle of mixed media paper so I could exeriment with a few new colours I bought Of Lindy's Stamp Gang Starburst Sprays. I spritzed liberally with California poppy Gold, Marigold Yellow Orange, and Rudolph's Nose Red allowing the colours to blend and run when I tilted the piece. I then dipped and dried, dipped and dried into the overspray on my craft sheet until I was happy with the colour and texture. A messy good time! 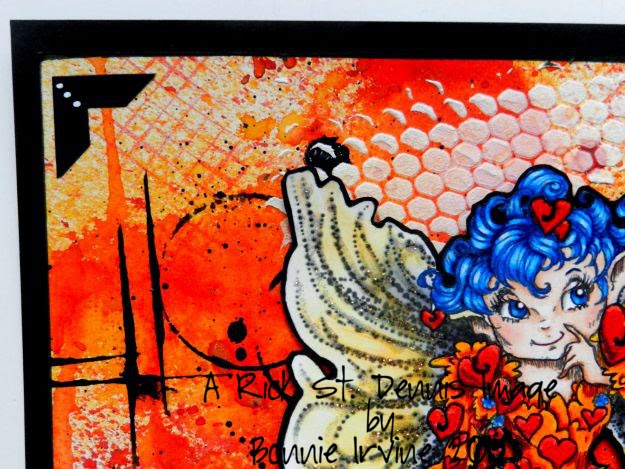 Since I had purposely left a few areas lighter, I randomly stamped an Artemio grid stamp with Red Geranium Archival ink. Watered down black gesso was used to make bottle top circles, gift card lines, and splatter from a tapped brush. I'm not sure who ended up with more on it, the background or me :) White embossing paste was scraped through TCW's Netting stencil for added dimension and texture. 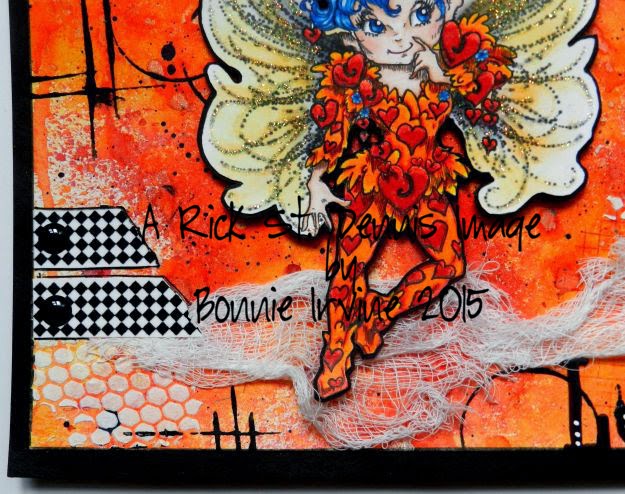 I wanted SOH Fairy to be floating among some clouds so I adhered some cheesecloth strips where her feet would be resting. Two rusty metal hearts were adhered next to her using Glossy Accents. The letters for the word LOVE were Ransom AlphaParts with white paint dots added. Black and white harlequin washi tape was adhered to white cardstock and then torn into three lengths. Black enamel dots were used to embellish them and add shine. A punched photo corner was given white dots to echo those on the letters before being adhered to the upper left corner. A black cardstock mat was adhered to the colourful background section before SOH fairy was added with foam dots.

I must say, I love how this piece turned out with the orange-yellow background and her fabulous blue hair. Thank you colour wheel and Rick St. Dennis! And thanks to you for stopping by today. When you get a chance, pop over to the Sparkle and Glitter blog to see how the rest of Team A interpreted this fabulous image. Such talent! We would love to have you play along with us this month!

This is a fabulous creation. I love the colours you've used on the fairy. I think her blue hair is stunning! Great work!