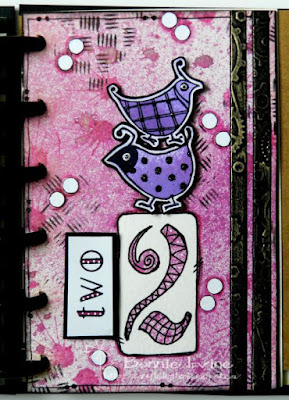 Hi everyone. It's Barb's turn to choose the prompt for Week 6 of the Joggles Art Journal Adventure and this week she has chosen the number 2. In my Joggles disc bound journal, I had combined various sizes of the watercolour paper and this particular one is 4 x 6 inches instead of the 6 x 6 inch I have been using. That adds both a little extra challenge and variety, both of which I like. I knew that I would have to keep things on a smaller scale as well as a little simpler than I usually create. 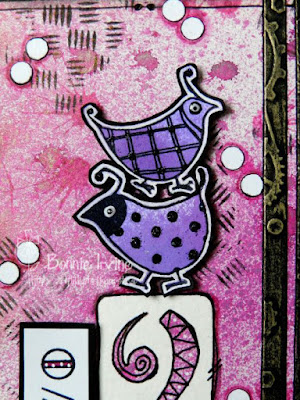 I started by placing a stencil with the # 2 near the bottom of the page. The actual number part was open and the stencil was shaped like a rounded rectangle. Lindy's Magnolia Magenta Gold Starburst Spray was spritzed over the entire page including the stencil which, once lifted, left this wonderful white space with the #2 stencilled in the middle. To make the background a little more interesting, Magenta Hue Archival Ink was used to stamp one of the Paint Splat shapes from a Darkroom Door stamp set. It's subtle but just what I was looking for. Kaisercraft Checker Plate Texture stamp was applied here and there with Jet Black Archival Ink. In keeping with the theme of two, two strips of black cardstock were embossed with a gears embossing folder and highlighted with White Fire Treasure Gold Paste to pick up the gold in the background from the Lindy's spray. These were adhered in two parallel bands on the right side of the page. 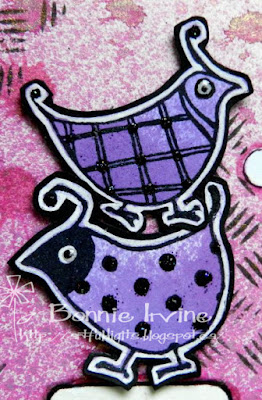 I wanted two small creatures to stack on top of the number rectangle so I pulled out some purple sprayed mop-up paper and stamped two of the Stampotique Originals Quails from the Quails Cube onto it. Ha! Colouring done...bonus :) They were fussy cut leaving a narrow border which I like to be white. A white paint pen came to the rescue, colouring the once purple border white. Each quail was then matted onto black cardstock and fussy cut again leaving a narrow black border. Black Diamond Stickles was used to put dots on both quails and Glossy Accents was applied to their tiny eyes. Foam tape was used to adhere them to the page giving them dimension and natural shadow. 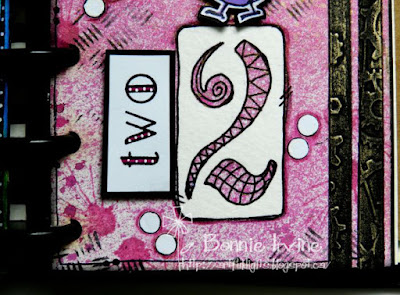 Black pen was used to outline the white rectangle as well as doodling inside the number. The word two was stamped using Altenew Modern Deco Alpha set and a magenta Sharpie was used to colour in the open part of each letter. White paint pen dotted the magenta and the word was matted with black before being popped up on foam tape. While I had the black pen going, I also doodled a page border with groups of two dots breaking up the line. Black Big Brush Pen was used to outline the edge of the page and then I walked away from it for a bit. There seemed to be something missing. I punched 1/4 inch circles from white cardstock, edged them with black and adhered them in groups of two around the page. Deep Rose Inktense pencil activated with a waterbrush was used to create a shadow around the two rectangle and the white circles to help them stand out a bit more and create some depth. Much better!

Thanks for visiting today. if you haven't already joined the Joggles Art Journal Adventure Facebook group...what's the hold-up? LOL. It's a great place to hang out with weekly prompts, lots of wonderful inspiration, and the nicest people. We would love it if you joined. There's no pressure to create every week and not everyone is making journals. Some are making tags, some atcs, and some playing with clay and fabric. Something for everyone :)