Lady of the House 1471 ~ A Sandra Caldwell New Release 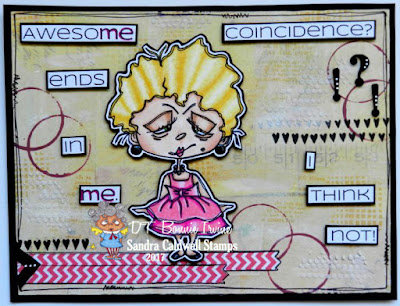 Hi everyone! It's New Release Friday at Sandra Caldwell's Etsy shop, Babycakes Digis and Designs and she has some dandy images for us again this week. The Design Team has done their usual fabulous job creating projects with some of them but Sandra always has a few surprises for us, too. This week, I chose to play with the new image called Lady of the House 1471. 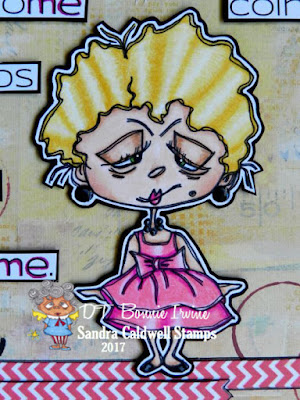 I coloured Lady with a mix of Polychromos and Prismacolor pencils and seized the opportunity to practise my marcelle curls colouring technique. It's so fun and the results always make me smile. Lady was fussy cut leaving a narrow white border and then matted with black card stock. Once she was fussy cut a second time leaving a narrow black border, she was popped up with foam tape to give added dimension. 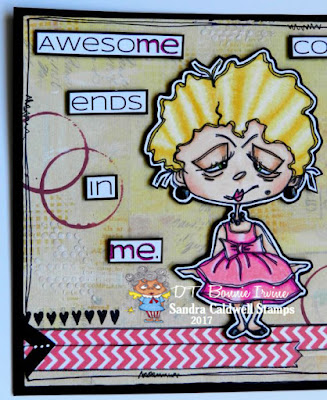 The background began as a 6 x 8 rectangle of designer paper. Extra detail was added with Pale Ochre Archival Ink and Joggles Nonsense Latin Text stamp as well as Carabelle Studio Quadrillages stamp. Jet Black Archival Ink was used to stamp the heart border but it was beefed up with a black Pitt pen because it seemed too dainty. Pink rings were added to the background using chalk paint and a bottle lid. Molding Paste was scraped through TCW Tiny Circles stencil and allowed to dry thoroughly. White gesso was drybrushed over the stencilling to help it show more and also in other spots in the background to add interest. 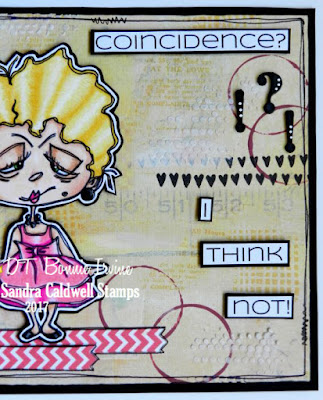 The sentiment was printed on white card stock, cut into individual words, and matted with black. Before adding foam tape to the back of each word, the "me" in awesome and the single word me were outlined in pink marker to draw attention to them. Two lengths of washi tape were adhered below Lady to give her a place to stand since floating is not one of her super powers. The washi strips were outlined with black pen and a doodled border was also added to the outside edges. Two exclamation marks and a question mark were adhered to the right side using Idea-ology Ransom Letters and white paint pen dots were added to them. A punched photo corner was added over the ends of the washi tape and white dots were added to it to repeat the dots on the marks. Black Big Brush Pen was used to ink the outside edges of the background before it was added to a black card stock mat.

Thanks for joining Lady of the House and me today. We're always happy when you stop by. To see more of Sandra's wonderful new releases which will be in the shop later today, and also see what our talented DT members did with them, be sure to drop by Sandra Caldwell Stamp Fans Facebook group, where they will be posted throughout the day. Pop by Sandra's Etsy shop, too, when you get a chance. There are so many fabulous images that you are sure to see some "Must-Haves".