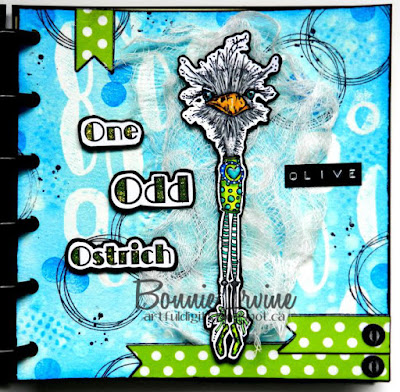 Hi everyone! With Barb busy at Creativation, it's my turn again to choose the prompt and create a response for Week 4 at the 2018 Art Journal Adventure Facebook group. The prompt I have chosen for this week is the Letter O. You might choose to feature an object/image which begins with O, a word representing a feeling, verb, or other option (do you see what I did there...LOL) or include the actual letter O as part of your design. As usual, I chose a few of these...I mean why limit myself to just one. 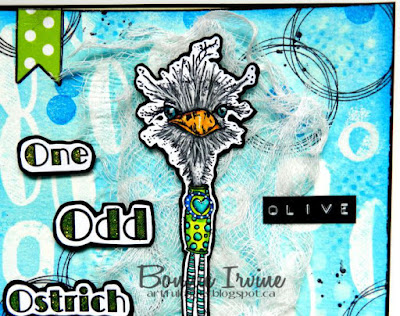 Next up in my disc bound art journal was another 6 x 6 inch watercolour page. I grabbed three letter Os from different sized stamp sets, loaded them up with Versamark ink and heat embossed them with clear powder. This creates a resist for the next step. I wasn't worried about spacing, having them go the same way, or extra embossing powder blobs...all of that was just going to add to the texture and interest. Next Broken China and Salty Ocean Distress Oxide Inks were layered over the background with extra Salty Ocean around the edges. Any inks that remained on the letters were quickly removed with a baby wipe. TCW Mini Beaded Curtain stencil was placed over the background and water was spritzed through the openings. After leaving it for a few moments, a paper towel was used to remove the ink where the water droplets reactivated the ink. Manganese Blue Archival Ink was used to apply a solid circle stamp as well as the pattern from Carabelle Studio Weft Fabric & Numbers stencil in several places.Jet Black Archival Ink was used to stamp a scribbly circle as well as some mini dots.

In keeping with the O theme, I decided to use Jet Black Archival Ink to stamp Stampotique Originals Olive the Ostrich on white cardstock. She was then coloured with a mix of Prismacolor and Polychromos pencils, some gel pens, and a white Sharpie Paint pen. Glossy Accents was added to her baby blues and the heart on her lovely outfit. She was fussy cut leaving a narrow white border, matted on black cardstock, and fussy cut again leaving a narrow black border. Usually this is enough contrast to let the image stand out against the background. However, Olive with her slim dancer's body was lost against the busy background so before adhering her with foam tape, I adhered two layers of cheesecloth behind her. It wouldn't do to have the star blend into the background. 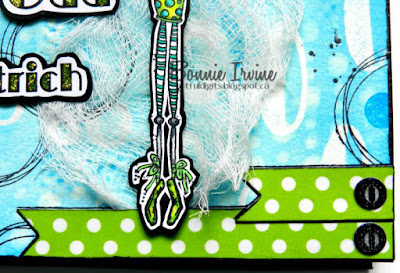 To give Olive a place to stand (on tippy toe), two lengths of green washi tape were mounted on white cardstock, and cut into flag shapes. These ground Olive and also bring more of that green from her dance costume into the rest of the page. Two dimensional letter O stickers were placed on the two bottom pieces and a shorter flag was added to the upper left corner to create a diagonal flow. 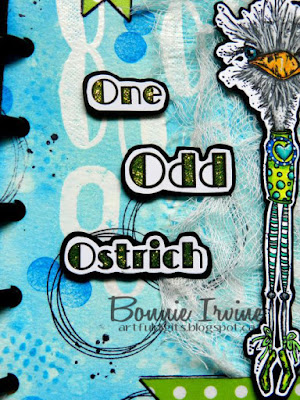 The wording was printed onto white cardstock, fussy cut, and matted with black. The filled in sections of this font were coloured in with a green Sharpie marker and then glittered up with Lime Green Stickles. Love the sparkle and glam that adds. Her name, Olive, was printed with a Dymo labeller and adhered opposite to the glittery letters. To finish up the page, black Big Brush pen was used to ink the outside edges and the washi was outlined with a black pen to make it pop a bit more.

This page makes me smile. I haven't done embossing and a resist in ages and you've gotta love Olive in all her splendour. I had no idea where I was going with this prompt but I'm happy where I ended up :) I can't wait to see what the talented and creative members of our Joggles AJA Facebook group do with this theme, the letter O. if you haven't already joined our community, now's a perfect time.

Life is good; so is art.
Bonnie
Posted by Bonnie Irvine at 07:50

Absolutely fantastic !! Thanks so much for playing along at the Stampotique Challenge!

wow! so wonderful! Love th Colors!
Thank you for joining us at the Stampotique Challenge.

Bonnie that's fantastic! Love Olive!
Thanks for joining us at Stampotique :)

Absolutely WONDERFUL!! Thanks so much for joining the Stampotique challenge xo Cheetarah

Such fun! Your dots remind me of soap bubbles.

Great!! Thanks for playing along at Stampotique.

Totally love it! Thanks for playing along at the Stampotique Challenge.

Beautiful and a great background! Thanks for joining this Stampotique DC!

Fabulous!
Thank you for joining the Stampotique Challenge
Jools x