Losing my Marbles - inspired by a Vera Lane Studio image 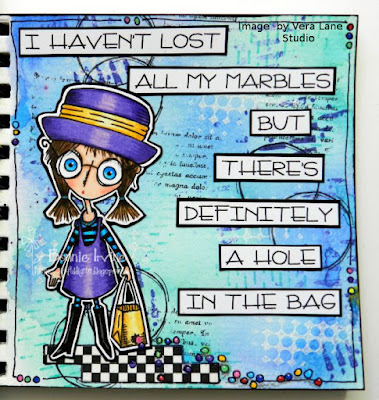 Hi everyone!Sometimes I find an image I love and want to colour but it isn't exactly right for my page. I like to tweak it a little both to change it up and to get more mileage from the original image.That's what I did with this image from Vera Lane Studio called Stella Luna. She was originally a witch with a witch's hat...and cute as a button. I removed her witchy hat and substituted a hat from the Boutique Hats digi set which changed her look completely. Love the new Stella! With 8 hats in that set, just imagine what else she could be :) 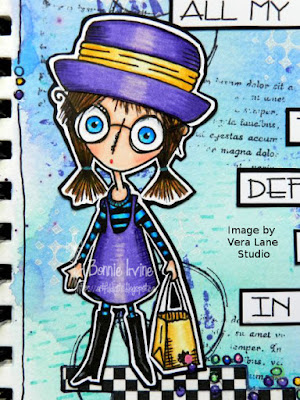 I coloured Stella with Prismacolor and Polychromos pencils, using black Pitt Pen to sharpen up the lines dulled from the pencils. The same pen was also used to outline a hole in her paper bag to fit the saying. She was fussy cut leaving a narrow white border, matted with black, and trimmed out again leaving a narrow black border. The hat was  glued to her head before she was adhered to the black cardstock. 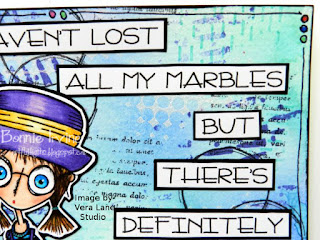 The 6x6 inch watercolour paper background was inked with Blueprint Sketch and Peacock Feathers Distress Oxides applied with a blending tool. They were then spritzed with water and the page was tipped in different directions to allow for some dripping and blending. I love these two colours together because you get this gorgeous purple where they blend. Once dried, one of the Carabelle Studio Grungy Patterns stamps was applied with Garden Patina Archival. A second one from the same set was applied with Deep Purple Archival Ink. Jet Black Archival Ink was used to add the Stampotique Circles Cube stamp as well as Joggles Nonsense Latin Text. Brilliance Moonlight White was applied to a stamp from Indigo Blu Tasty Textures set. 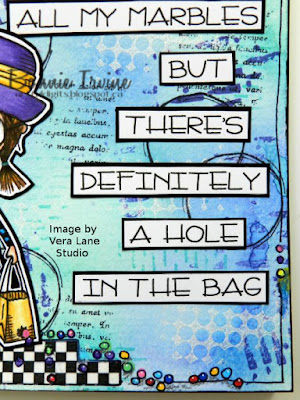 Since Stella Luna needed a place to stand, and I just happened to have two strips of checked washi tape on my desk, I stacked them on the bottom of the page before she was adhered to it. Posca Paint Pens were used to make the marbles which were then outlined with black pen. The same pen was used to create a border with marbles separating the lines. The saying was printed on white cardstock, cut into sections, and matted with black before being glued flat to the page. Black Big Brush Pen was used to darken the outside edges of the page.

Thanks for joining Stella Luna and me today. We love that you popped by. Be sure to visit all her friends at the Vera Lane Studio Etsy shop. You're sure to be inspired to play.