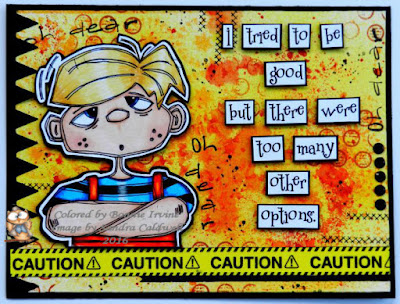 Hi everyone! When I was a kid (way back in the day), I used to love watching Dennis the Menace with poor old Mr. Wilson. I used to laugh and laugh at the crazy situations Dennis got himself into and at Mr. Wilson's reactions. Sweet memories. When I saw this fun image by Sandra Caldwell (which will be in her Etsy shop later today) called 1126 Almost Dennis, I really wanted to colour him up. I had an ideal saying that suited him to a tee. 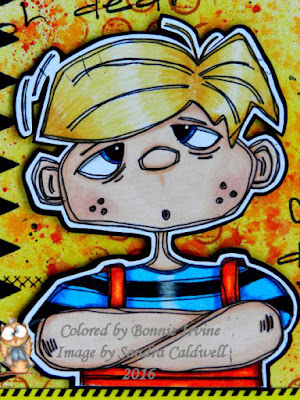 I coloured Almost Dennis using Prismacolor and Polychromos pencils. He was fussy cut leaving a narrow white border and then matted with black card stock. Once he was trimmed around again to leave a narrow black border, foam tape was added to the back of the image to give some dimension. 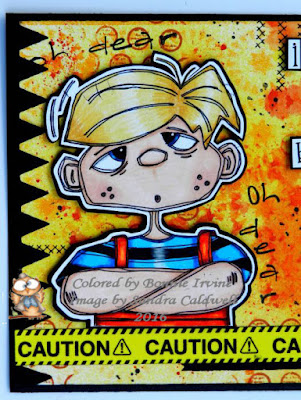 The background was one that I had started earlier. I believe the first layer of colour were Lindy's Yellow Rose of Texas and Marigold Yellow Orange Starburst Sprays. Hag's Wart Orange Starburst Spray was spritzed heavier on one side than the other. Marigold Yellow Orange was again used to spritz through TCW Mini Stars and Circles stencil on the left side of the page. Orange Blossom Archival Ink was used to add a VLV Circle Text stamp. Black Archival Ink was used to apply a VLV stitching stamp as well as the words Oh dear and a splatter stamp. Almost Dennis was adhered in place and washi caution tape was applied to white cardstock and adhered below him to ground him. A small strip of black was added below the washi tape. A black die cut border was added to the right side of the page. I like the zigzag shape because it adds tension which Dennis had a habit of doing too. 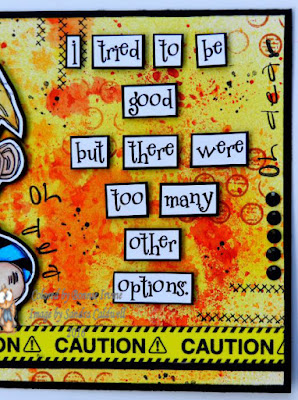 The sentiment was printed on white card stock and the words were cut apart. They were then matted with black and then popped up on foam tape.To add a little more black to the right side for balance, five black rhinestones were adhered along the edge. Black Big Brush Pen was used to outline the page before it was matted with black card stock to frame it and draw the eye into the design.

Thanks for joining Almost Dennis and me today. To see more of Sandra's new releases, be sure to pop by Sandra Caldwell Stamps Fans Facebook group where the rest of my talented DT teamies will be sharing their wonderful creations. Later today, you will want to hop on over to Sandra's Etsy shop because not only these new releases will be available, but she often sneaks in a couple of yummy surprises, as well. There are images for every occasion and inspiration galore there! I always have a giant  Must Have list after stopping by on Mondays.