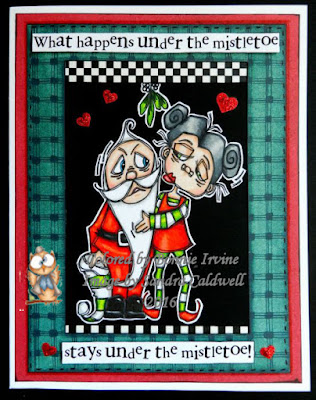 Hi everyone! It's New Release Monday at Sandra Caldwell's Etsy shop and you know what that means...all kinds of fabulous new images and wonderful DT projects on the Sandra Caldwell Stamp Fans Facebook group. This week I was able to play with and image starring one of my favourite characters Old Lady. I just love the mischief she gets up to as well as her fabulous feisty attitude. This one is called 1231 Old Lady Kissing Santa. The expressions on both of their faces cracks me up. She seems far more enthusiastic than he does :) 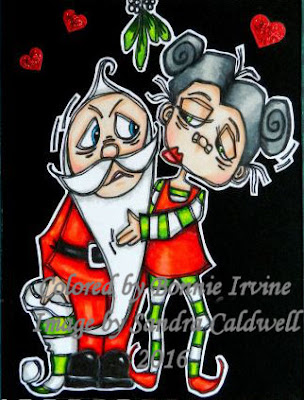 I coloured them with a mix of Prismacolor and Polychromos pencils. The image was fussy cut leaving a narrow white border but I didn't need to mat the image with black since the background was going to be that colour. Yay! Saved a step! 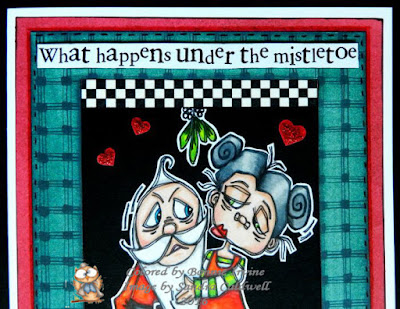 I once again used designer paper with a frame that looked like two layers. I am almost out of that paper now. I used a craft knife to cut out the center of the paper and cut a piece of black card stock slightly larger than the opening. The red layer was edged with Black Big Brush pen and then shaded next to the green with coloured pencil. The green layer was faux stitched next to the red part. Before the black was adhered behind the opening, black and white checked washi tape adhered to white card stock to take away the transparency was adhered to the top and bottom of the opening. That allowed the top of the mistletoe to "hang" from it. 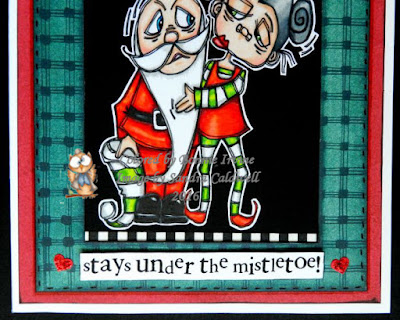 The sentiment was one that came to me when my sister and I were talking about Vegas. I switched it up to suit being under the mistletoe. It was printed on white card stock and trimmed close to the words. To finish off the card, small hearts were punched from red card stock and adhered above the couples' heads and either side of the bottom section of the sentiment. Red Stickles was added to all of the hearts for a little festive sparkle.

Thanks for joining Old Lady, Santa, and me today. We all appreciate that you took the time to do that. When you get a minute, be sure and pop by the Sandra Caldwell Stamp Fans Facebook group where our talented DT will be posting their makes throughout the day.  Steal some time to stop by Sandra's Etsy shop, Babycakes Digis and Designs, to browse through all of her awesome images. She still has a great sale going but only until the 15th so don't procrastinate :)