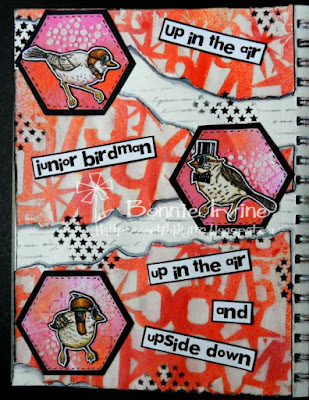 Hi everyone! Twas the Day before Christmas...and I took some time out to finish up my response to Barb's Art Journal Adventure prompt for Week 50 which was to Use a Brayer With Something That Will  Act as a Resist. As usual there is no pressure to follow the prompt exactly so I chose to use the resist part and skip the brayer part. Like Barb, I chose Gel Medium as the resist medium of choice. 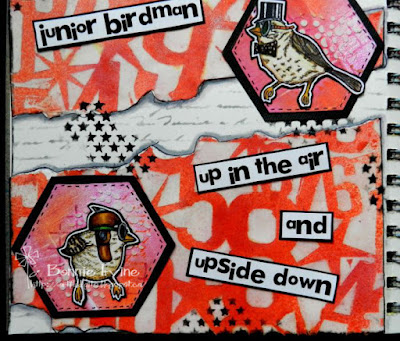 I began by scraping gel medium onto the page background through Joggles Number Sparkle Mask using a palette knife. It took a while to dry but once it did, I spritzed Hag's Wart Orange, Hottie Patottie Hot Pink, and California Poppy Gold Lindy's Starburst Sprays over the stencilled page and then used paper towel to blot the sprays off the gel medium. It sunk in where there was no gel medium showing off the stencil pattern. To deepen the colour and add a little more pink, Picked Raspberry Distress Ink was added here and there. 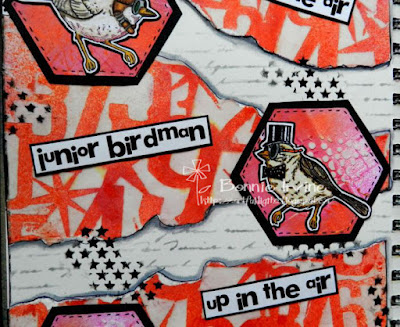 The page looked very cool at this point but WAY too busy...even for me. To break it up and give the eye some places to rest, I tore out the page and then tore the background into three strips leaving white space between each. A big improvement! Black gesso was stencilled through Joggles Punchinella Quartet stars overlapping both the coloured strips and the plain white. This helped to tie them together. The white spaces were too stark now so Gray Flannel Memento ink was pounced through Carabelle Studio Handwritten Text Stencil. First black Pitt pen and then Gray Neocolor II were used to outline next to the coloured sections. 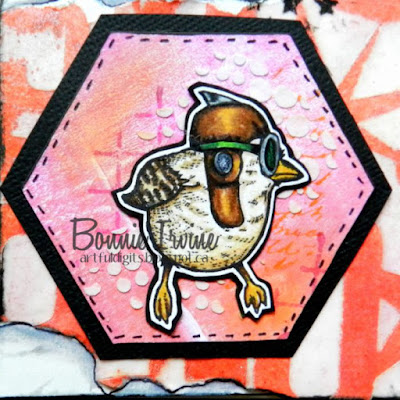 The stars of this page were going to be the funny little Birds stamps from Carabelle stamps. I love those little guys with their fancy hats. They were coloured with Prismacolor and Polychromos pencils, fussy cut leaving a white border and then matted with black card stock. Hexagons were die cut from previously white card stock which I had used to clean paint off my brayer when gel printing. 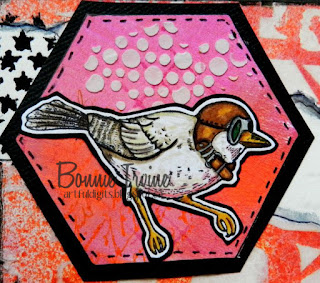 To make the backgrounds a little more interesting and textured, Tiger Lily Archival Ink was used to stamp Joggles Nonsense Latin Text stamp. Magenta Hue Archival Ink was used to stamp a large mesh stamp in a few places and then Ranger Texture Paste was scraped through TCW's Microbial stencil. Faux stitching was added to the outside edges of each hexagon before they were matted with black. 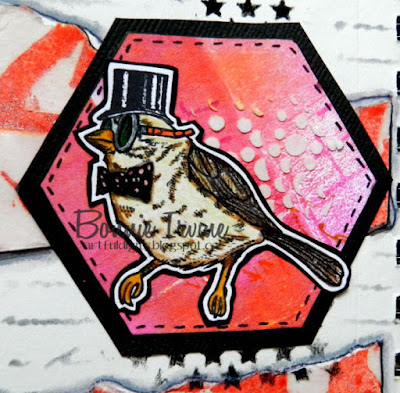 The wording, from the old camp song we used to sing as kids, was printed onto white card stock and then cut into sections which were matted with black. To finish off the page, black Big Brush Pen was used to edge the two sides and bottom edge making sure that some of the ink overlapped the front edge. I like the way that frames the page and also makes the edges less perfect and more in keeping with the rest of the page.

Thanks for stopping by. The Junior Birdmen and I appreciate that and wish you a Merry Christmas. I cannot believe that this Monday will be the last prompt for the 2016 Joggles Art Journal Adventure. It's been a blast. I sure hope you will join us for 2017 :)

Life is good; so is art.
Bonnie
Posted by Bonnie Irvine at 15:03