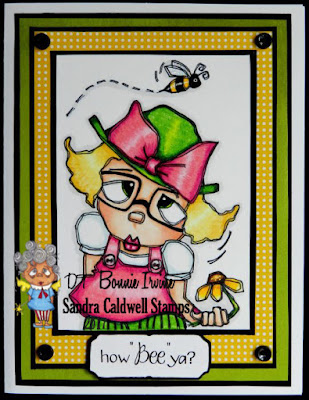 Hi everyone! It's New Release Friday at Sandra Caldwell's Etsy shop, Babycakes Digis and Designs. Just one more fabulous reason to love Fridays. Today I am playing with the sweetest image which makes me long for spring and gardening. The image is called Bee a Gardening 1313 and will be available in Sandra's shop later today. 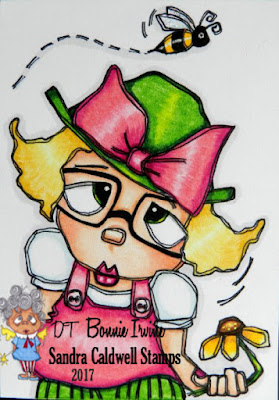 I coloured her up with Prismacolor and Polychromos pencils, adding a little gray Copic marker around the outsides of the two characters to create a shadow. It's subtle but I like doing that when I am not fussy cutting the image and matting it with black. Diamond Stickles were added to the bee's wings to add a little sparkle. 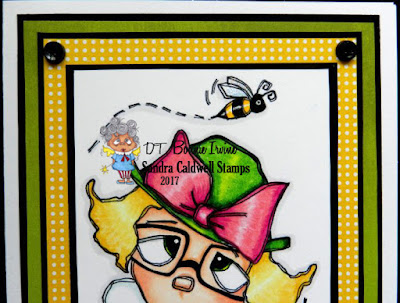 A rectangle of green card stock was matted with black and added to the white card base. Over that, a piece of yellow and white dotty paper matted in black was layered. The image, also matted in black, was adhered over that yellow layer. In the four corners of the yellow layer, tiny threaded black buttons were adhered to set it off. I had printed the image fairly large for a card so there wasn't much room or need to add a lot of embellies. 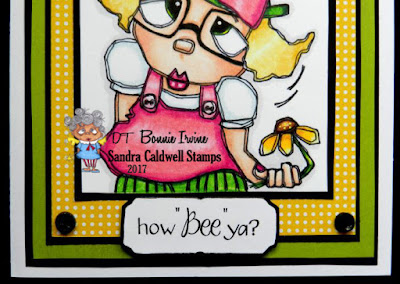 The sentiment from Create With TLC was printed on white card stock and die cut. The fancy ends of the die cut were trimmed off to better suit the card and then it was matted with black. Foam tape was used to adhere the sentiment and add dimension. Easy peasy card!

Thanks for joining us today. Bee, her little friend, and I appreciate that. To see the other wonderful new releases by Sandra and also the wonderful DT makes with them, be sure and pop by the Sandra Caldwell Stamp Fans Facebook group where they will be posted throughout the day. You can also stop over to Sandra's Etsy shop, Babycakes Digis and Designs, to see not only these newbies but also all of the other wonderful images in her shop. I always come away inspired and with new images with which to play! Can't resist...LOL

Fabulous card, Bonnie! Your colouring is so bold and bright...definitely looks like Spring! :o)