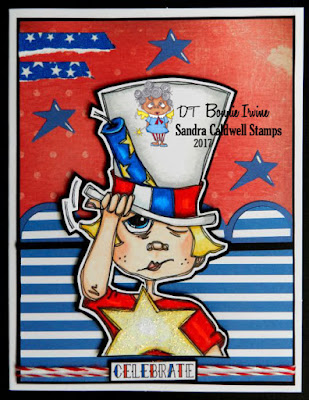 Hi everyone! It's New Release Friday at Babycakes Digis and Designs, Sandra Caldwell's Etsy shop. This week I was fortunate enough to be able to play with two of the week's new images. This one is called Firecracker Kid 1342 and I decided to create a patriotic American version, even though I am a true Red & White Canadian...LOL 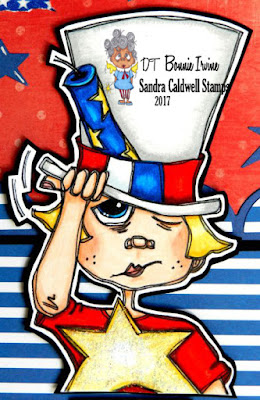 The image was coloured with a mix of Polychromos and Prismacolor pencils. Diamond Stickles was added to the large star in front of his t-shirt. The image was fussy cut leaving my usual white border and then matted with black card stock. Once that was cut leaving a narrow black border, the image was popped up on foam tape for added dimension. 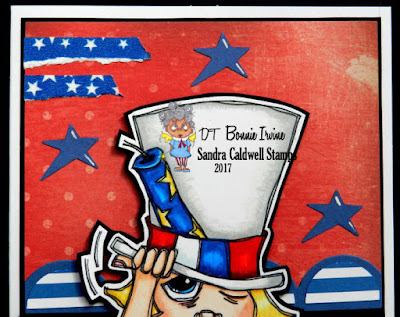 The background for the card was a combination of two different designer papers: a red and white dotty paper and a blue and white striped one which was layered over the red. A third plain blue paper was die cut into a scalloped border and adhered above the blue and white striped layer. Small half circles were punched and added to the scalloped border. A black strip of card stock was used to cover the seam between the blue layer and the scalloped edge. Stars were punched from the same plain blue paper and adhered above Firecracker Kid's wonderful hat. White gel pen highlights were added to each star. 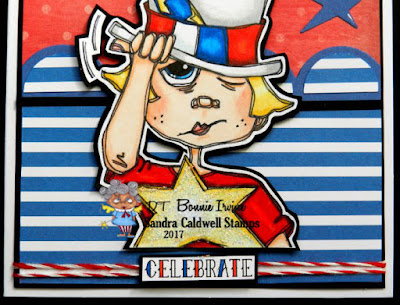 Thanks for joining Firecracker Kid and me today. We really appreciate that. To see the rest of today's new releases and what the DT members have done with them, be sure to visit Sandra's Facebook group where they will be posted throughout the day. Stop by Sandra's Etsy shop, too. You'll see the extra images Sandra posts each Friday as well as a fabulous assortment of images from previous releases. It's an inspiring place to hang out.