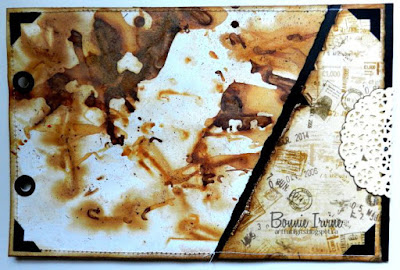 Hi everyone. A while ago when I was rusting some safety pins to use in my junk journals and other mixed media art, I used a couple of pieces of white cardstock to set the pins on in the sun once they came out of the soaking solution. When they weren't rusting as quickly as I wanted (yes, I'm impatient), I spritzed them with more of the solution and let them dry again on this same paper. Well, the pins turned out fabulous and ...Bonus...the paper they were dried on was equally awesome. Its rusty and grungy with amazing texture and imprinting. I just knew it had to be another page in my current junk journal. I folded it in half and then stitched around the edges, punched my holes for the binding, and then waited to be inspired. 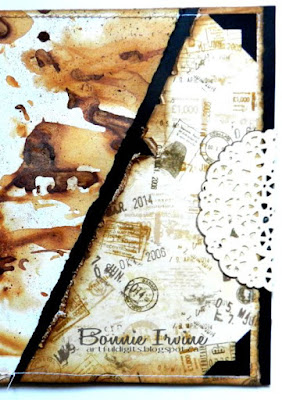 The problem was that I didn't want to cover the rust and grunge and I just knew that I would want to pet the rusty rough texture. Yes, I do that...LOL. Anyway, I decided that a tuck spot on the diagonal would leave more exposed rusty paper so I went with that. I tore a piece of black cardstock to the angle I wanted and then tore a scrap of designer paper to fit inside the black one while leaving a border on both sides and inked the edges. These two pieces were then stitched on my machine along three sides  leaving the inner edge free to create another tuck spot. The pockety tuck spot thingy was adhered to the background along the outer edges so now I had two pockets to stash things for the price of one :) A die cut doily was scored and folded in half so that it could be wrapped around the outer edge, becoming an element on the front and back of this page. 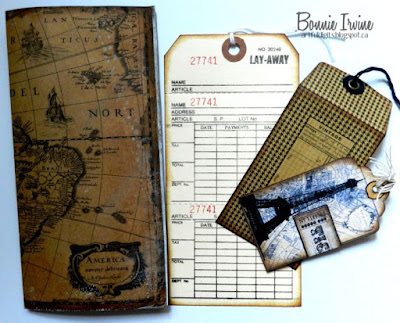 Because I wanted to leave the rust as exposed as possible, I chose two skinny things for the lower pocket and one for the top pocket. A rectangle of map printed on kraft cardstock was inked and folded in half. Inside, gesso was spread over the faded floral pattern to knock it back so it could serve as a journalling spot. A Lay-away tag purchased from J9Scraps was inked on all edges and the back left blank for writing. The little envelope was a Graphics 45 embellie, into which I inserted a small printed tag from Pixel Market. The ticket from Vectoria Designs was wrapped around to the back which still leaves room to write. 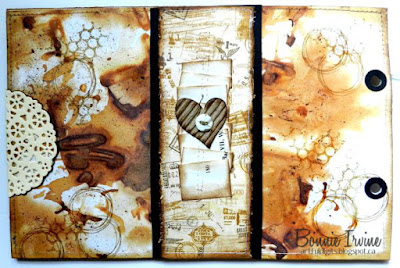 The other side of the page is where the imprinting of the rusty pins was most noticeable. I added some circle and punchinella stamping with Coffee Archival to add to the texture and patterning. 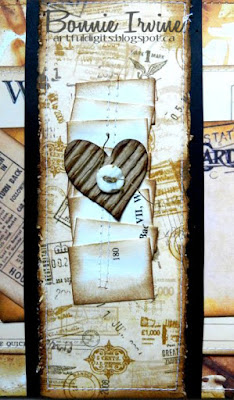 A 2.5 inch black band was cut and layered over with a 2 inch distressed rectangle of the same designer paper from the other side. This was stitched around and then the stack was adhered top and bottom to the background creating a belly band to hold ephemera. An accordion folded, inked, and sewn length of vintage book paper was centered on the band and was then topped with a die cut corrugated heart and a vintage button. 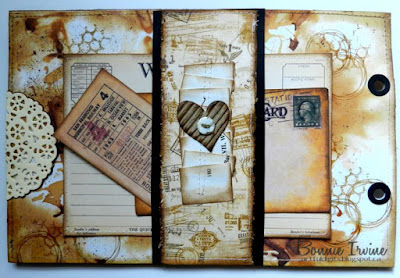 Here is the finished page with the goodies tucked under the band. There is a downloaded Western Union telegram form, a post card, and a railway ticket, all with journalling room on the back. This double page went quickly because most of the heavy lifting was done by the random rusting and imprinting done by nature.

Thanks for visiting today. I appreciate that so much! Who knows where this junk journal will take me next. It's certainly a place for experimenting and re-purposing...love that!

Oooooh - Bonnie that is delicious! You are so right, what a serendipitous development!
~ginny
RubberMAD