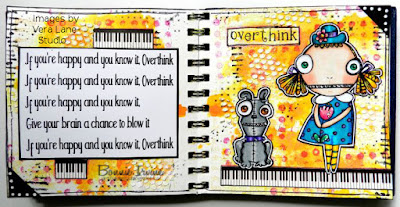 Hi everyone! I came across an altered version of a very familiar song that made me laugh out loud, mostly because I could see myself in it. I, like many people, am notorious for overthinking something, although strangely enough not when it comes to my art where I am intuitive and rarely think about what I am doing or where the piece is going. I decided that the digi set by Vera Lane Studio called Raven and Pixie was the ideal set to illustrate this message. Look at their faces...Yikes moments, for sure. 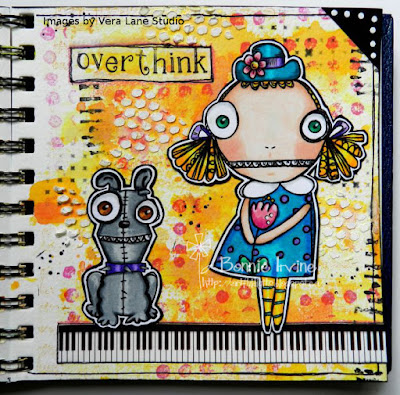 I coloured Raven and Pixie with a mix of Polychromos and Prismacolor pencils, using a black Pitt pen to go over the black lines that the coloured pencils dull. They were both fussy cut leaving a narrow white border, matted with black, and fussy cut again leaving a narrow black border. The double border helps them stand out next to the busy background and has become one of my signature details. 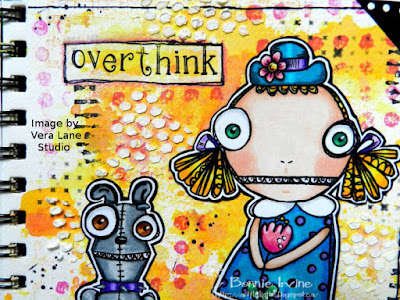 The background already had a little colour from a previous page where it transferred while I was working on it. I went with the same two colours of Distress Oxide but used the ink pads instead of the sprays. Fossilized Amber and Spiced Marmalade Distress Oxide Inks were smushed one at a time onto a 3x3 inch gel plate, spritzed with water, and dabbed onto both pages of the spread. Drying with a heat tool was done between colours and between layers. Once the saturation and patterning were what I was looking for, I applied Magenta Hue Archival Ink in several places with one of the Carabelle Studio Grungy Pattern stamps by Kate Crane. Jet Black Archival was sponged through Alexandra Renke Grid of Crosses stencil and was also used to apply the lines from Indigo Blu Tasty Textures stamp. Ranger Texture Paste was scraped through TCW Mini Netting stencil to add dimension. 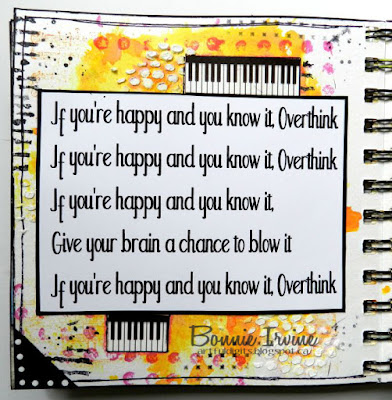 The song lyrics were printed onto white cardstock, cut into a rectangle, and matted with black. The word on Raven's page was done with a Lawn Fawn alphabet stamp and Jet Black Archival. It was outlined with black pen and lightened on the inside with white acrylic paint. Pink coloured pencil was used to shade around it on the outside to help it stand out. Piano washi tape was mounted on white cardstock, trimmed out, and used to ground Raven and Pixie as well as accent the song lyrics. Two black triangles were added to opposite corners and white dots were added to tie in with the piano keys. A simple doodled border was added around the outside of the two page spread which was also edged with black Big Brush Pen.

Thanks for joining Raven, Pixie, and me today. We appreciate that! To see all of Janet's fabulous images, check out the Vera Lane Studio Etsy shop. Be sure to also pop by the VLS Facebook group, too, because there is new inspiration and projects featured daily. I hope that song isn't stuck in your head, and if it is, it at least makes you smile :)