Shelter from the Storm ~ Inspired by Vera Lane Studio images 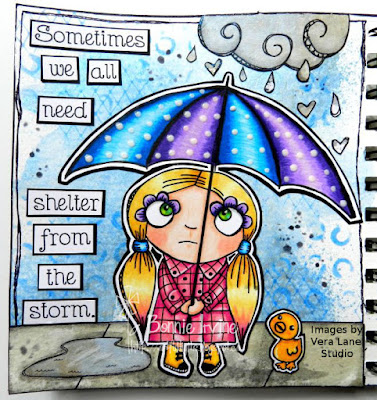 Hi everyone. We have had so much rain lately that it even managed to creep into my art journal... LOL. I love this image by Vera Lane Studio called Under my Umbrella and wanted to create a scene for her where she created her own bright spot in a gloomy day. The cloud comes from another VLS set called Hello April. The puddle is actually the pond from The Little Sailor digi stamp set and the chick comes from the Farm Animals 2 set. I absolutely love how so many of Janet's sets come with extra images which can be combined with the main ones from other sets or can star all on their own. 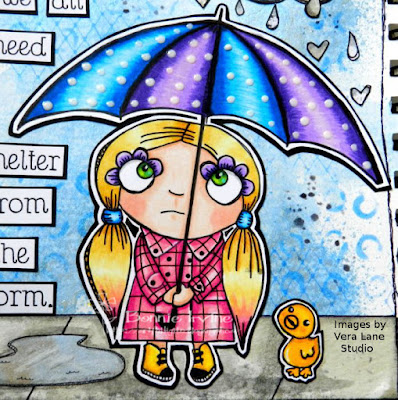 I printed Clair, the umbrella girl, and the chick onto white cardstock and coloured them both with a mix of Prismacolor and Polychromos pencils. White Nuvo Crystal Drops were added to her umbreall and black Pitt Pen was used to pattern her coat. Both Clair and the chick were fussy cut leaving a narrow white border, matted with black, and fussy cut again leaving a second border of black. 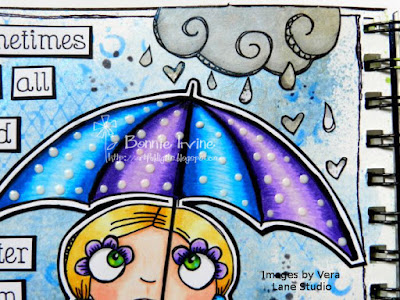 The cloud/raindrops and the puddle were printed onto left-over ink sprayed scraps and fussy cut without borders or extra matting. They were shaded with Clean Color Brushes and sparkle was added with Clear Wink of Stella. 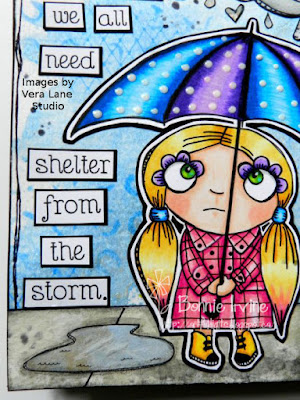 The 6x6 inch background was spritzed with Heidi Swapp Ocean Color Shine plus water to help it move when tipped. To add interest and texture to the dried spray, French Ultramarine Archival Ink was used with Studio 490 Vintage Mesh Stamp and was sponged through the grungy circles from Studio Light MaskMB06. The sidewalk was created by spritzing Lindy's Down The Rabbit Hole Starburst sprays onto a strip of watercolour paper and then inking the edges with Watering Can Archival Ink. Black Big Brush Pen was used to darken the edges and Pitt Pen to create the sidewalk cracks. Once the puddle, Clair and Chick were glued in place, a gray Clean Color brush was used to create shadows on the sidewalk. The wording was printed onto white cardstock, cut into individual words and matted with black. A wobbly border was doodled around three sides of the page and black Big Brush Pen darkened the edges to help frame it.

Thanks for joining Clair, Chick, and me today. We hope the sun is shining wherever you are and if not, that you have a big umbrella to shelter you from the storm. As for me, I'm heading back to the Vera Lane Studio shop to see what I can get into next :)

Life is good; so is art.
Bonnie
Posted by Bonnie Irvine at 10:30