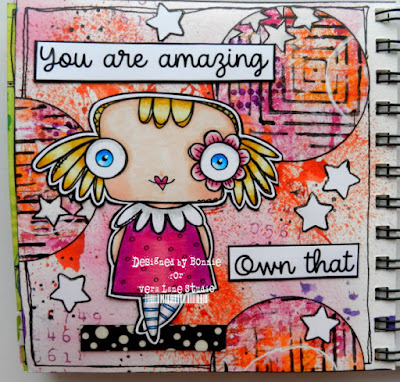 Hi everyone! I have two art journal pages to share today. The first one was created with the Party Like a Girl image which was released by Vera Lane Studio yesterday. The set contains two girls, two hats, and two sentiments...and every detail is so cute! 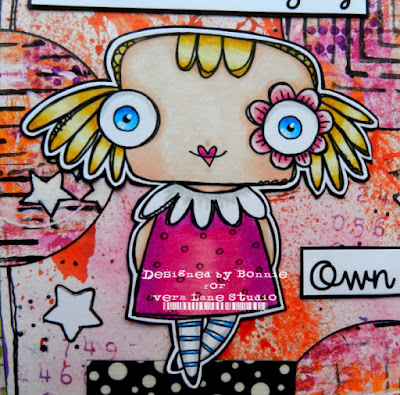 I coloured the smiling Party Girl using Prismacolor and Polychromos pencils, using bright colours to show her bright outlook. A little extra doodling was added to give some pattern to her dress and carry on with the circle theme seen in the background. She was fussy cut leaving a narrow white border, matted with black cardstock, and fussy cut a second time leaving a narrow black border. 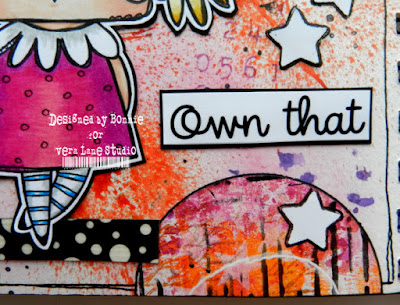 The 6x6 inch watercolour paper background was spritzed and splatted with Lindy's Hag's Wart Orange Starburst Spray and the negative spaces were lightly filled in with Picked Raspberry Distress Oxide Ink. Stamping was added with Magenta Hue Archival Ink and a Viva Las Vegas Number stamp as well as a Rubber Moon dot stamp applied with Jet Black Archival Ink. I had previously decorated a sticker sheet with sprays, stamps and stencilling, creating a master board. I used one of the 2.5 inch circles whole and sliced another in half to create a visual triangle of these patterned shapes. They add just the pop of colour and pattern I was looking for. 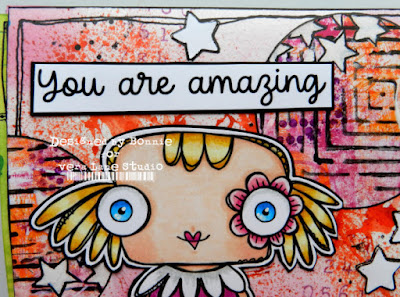 Finishing details were added in the form of outlining of the circles and a doodled border using black pen. The wording was printed onto white cardstock and matted with black. A strip of washi tape was placed below Party Girl's feet to ground her and white punched stars replicating the stars on the circles were scattered about the page, both to brighten it with pops of white and to add unity to the design.

Thanks for joining Party Like a  Girl and me today. We are delighted to have you visit. When you get a chance, be sure to stop by the Vera Lane Studio Etsy shop as well as the Vera Lane Studio Facebook group. Both are awesome places to gather inspiration for that project you've been wanting to create.