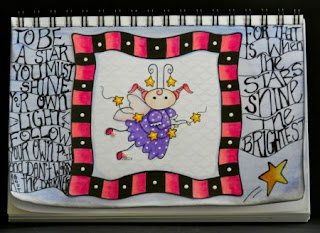 I had an urge to art journal again...just for the creative outlet it provides. I used this sweet digi image from CS Designs called Chloe with a string of hearts. I combined that with the wavy striped frame image, also from CS Designs. It made such a cute combination that I know I will use it in a card as well.

I decided to make the image set as large as I could for the journal I had in mind. Then Prismacolor pencils were used to colour both Chloe and the frame. I wanted a little texture in the sky area so I coloured over a texture plate to get the subtle fish scale pattern. Chloe told me that her dress was a little too plain and since she's not one to complain, I took her comment to heart and added some white acrylic dots to her dress and the frame. Some flat back pearls were also added to her stars and shoes, as well as bling to bring out the sparkle in her eyes.

On the background of the rest of the page, I pounced over punchinella with white paint and randomly stamped with a checkerboard border stamp that was sitting on my desk. Then I hand lettered in the sentiment following some curvy lines drawn with my Pitt pen. A shooting star  was drawn in the corner, coloured and some sparkle added to the star, Chloe's wings, and the rays coming from the word light. Such a simple page but it made me happy which is, after all, the point of art journalling :)

I will enter this page in the striped challenge at Dilly Beans Challenge blog because not everyone thinks of adding digis to their art journal pages and I want to show that it's easy and effective.

Thanks for visiting...you are a star!

Life is good; so is art.
Bonnie
Posted by Bonnie Irvine at 09:18

I love the way the Chloe spoke to you. The sentiment is beautiful, and so is the way you hand wrote it . Great inspiration

Love the quote and the way you presented it looks just like something out of the pages of Somerset Studio magazine. So Artsy-Fartsy! Love the star on the bottom corner---it makes a perfect exclamation point. Is the quote an original?

Oh Bonnie, This is just so amazing. I love what you have done with Chloe, that little polka-dotted dress is very fashionable,, but your letter is adds a Wow factor to this piece. You have been hiding many talents from us, and I would definitely love to see more of this.
:) Chris / CS Designs

Super cute, thanks so much for joining us at Dilly Beans. :)

Great card. Thanks so much for playing along at Dilly Beans this week.