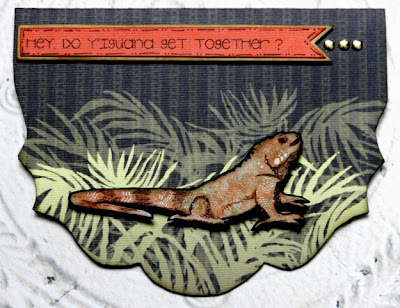 The challenge set this week by Cindy Groh at Chalk-Ah-Lot Cafe is to use chalk on a shaped card. I rarely make shaped cards although I really like them so this was a fun challenge for me. I knew that I wanted to use this fun iguana stamp from Stamp N Plus Scrap N so I inked it with Versamark on plain white cardstock. A scruffy old brush was loaded separately with Teddy Bear, Jade, and Brick powdered chalks from Stamp N Plus and pounced and brushed over the still wet Versamark. Each chalk colour was grabbed by different parts of Iggy (the iguana) so all three colours showed up. In a few places, the colours blended creating different shades. 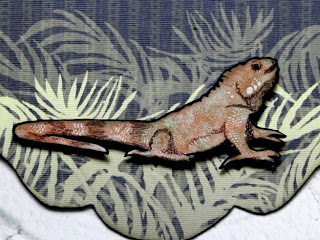 Iggy was spritzed lightly with Pearl Glimmer Mist and allowed to dry thoroughly. Once dry, he was fussy cut and inked around the edges with Walnut Stain Distress ink. Iggy was then layered on black cardstock and fussy cut again, leaving a narrow border of the black. Prismacolor pencils were used to further define his stripes, head, and legs...anywhere you see dark brown. The coloured pencils worked like a charm over the chalk! A tiny black half pearl was added to his eye.

The background paper comes from the DCWV Safari Chic textured cardstock stack. A Paper Wishes template was used to trace the card shape and then the layers were hand cut. The edges were darkened with Distress inks to allow them to better frame the card.The sentiment was computer generated on a scrap of orange from the same paper stack. It was cut into a banner shape, faux stitched, and matted with kraft coloured cardstock. Foam tape gave it some dimension and nailhead stickers emphasized the flag end.

I am really happy with the way this card turned out. I had tried stamping Iggy with Versafine ink and then colouring him with Prismas but the effect was harsh. The chalk plus the Versamark really gave him the soft blended look I was going for and the coloured pencil defined him beautifully. I love experimenting like this to see what I can combine with chalk to get a different effect.

Thanks  for visiting today. Pop over to the Chalk-Ah-Lot Cafe blog to see Cindy's project for this challenge. It's beautiful. Maybe you'll feel inspired to join us. Remember, to qualify, you must use chalk somewhere on your shaped card and state where you used it.

I am entering this card in the following challenges:
Amusing Challenges ~ Scissors (fussy cut iguana and card shape)
Challenges 4 Everybody ~ #11 Anything Goes
The Squirrel and the Fox ~ #35 Anything Goes

Life is good; so is art.

Bonnie
Posted by Bonnie Irvine at 18:18

Very cute, great card and sentiment, thanks for playing with us at the Squirrel and the Fox,blessings Hilde

Hi Bonnie, adore the shimmers and shades you've built up on the iguana - he is stunning. Wonderful card - reminds me to break away from always making them square. Nicola x

Hi Bonnie! Love the shape of your card, and your sentiment is really cute!!
Claire xx

What a great card, Bonnie, and lovely to hear how it all came about - fantastic shape, and I completely agree about the chalky finish!
Alison x