Sometimes I have small stamps that I want to use because of their cute factor but they are too tiny to be the only image on the card. I have done multiples of the same image using them on inchies or twinchies but this time I decided to combine them into a larger scene for this fortnight's Chalk-Ah-Lot Cafe challenge of Anything New. 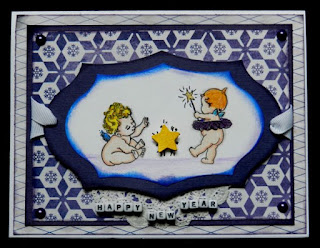 Stamp N Plus Scrap N images Magic Cutie and Star Baby Sitting were stamped with Memento Tuxedo Black ink so that it looks like Cutie has waved her magic wand and conjured up the star to amuse the sitting baby.  Both images were coloured with Prismacolor pencils before being cut with an MFT die. Their tiny wings were coloured with metallic blue gel pen. The edges of the die cut were inked roughly with Versamark and then Jules Blue and Pearl Purple powdered chalks were brushed on over the Versamark. The star was punched twice and then Buzz N Magic paint was dabbed on before Dandy and Shine powdered chalks were pounced on top. The two stars were layered using foam dots for dimension. 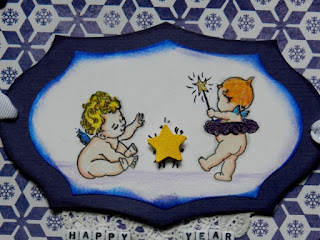 Once the image was matted with purple cardstock, a small hole was punched on each side of the purple for the white grosgrain ribbon to slide through. The Image was mounted on foam dots before being adhered to the purple snowflake background from DCWV's Christmas Combo Stack. The ends of the ribbon were taped to the back and that layer was matted with more purple cardstock. To finish off the card, part of a small doily was added to the bottom of the image and bead letters were added to spell Happy New Year. Flat pearls were added to each corner before that layer was adhered to another patterned paper from the same stack.


Be sure to check out the Chalk-Ah-Lot Cafe blog to see Cindy's take on this challenge and other ways to use powdered chalk. Maybe you'll be inspired to create a project for this chalk challenge...hope so:) Thanks for visiting today.

Life is good; so is art.
Bonnie
Posted by Bonnie Irvine at 15:12

Thanks for the thoughts and prayers Friend--I love your color combo on this card and these little angels are perfect for a New Year feel.