Complicated Artists Who are Not Amused...lol 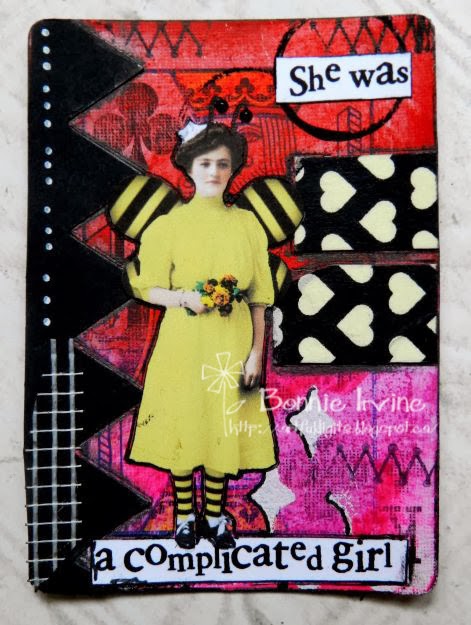 Did that title confuse you? I just took bits of the sayings on each of my altered playing cards and smashed them together. It sounds like a tabloid headline...gave me a chuckle anyway. It's been a while since I have posted any of these so I thought I'd share another three. I have to prep another deck so that I'm ready to play some more. Once again the backgrounds are a combination of products to get colour onto my cards. I won't go into the steps since it's a spin-off from the wonderful workshop I took with Mary Jane Chadbourne last summer. I can tell you that I used gelatos, watercolour crayons, and Big Brush pens primarily, along with white gesso stencilling, and stamping with Archival inks. Rings were added with watered down black gesso on bottle lids. Paper scraps, washi tape, and a litttle drywall mesh also make their appearance. All of the images are from Deviant Scraps and were fussy cut. All of the wording was generated on the computer, fussy cut, and matted or edged with black. The woman in the first card is indeed complicated given that she is part bee. However, sometimes complicated can be fascinating or at least a great story. Anything or anyone with layers can seem complicated initially. 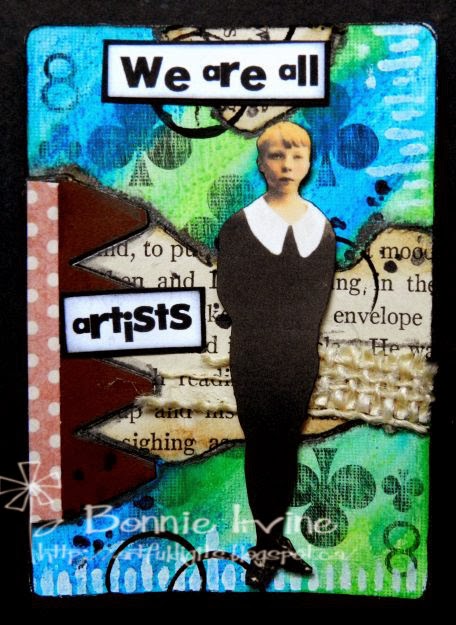 The second one has a saying that I truly believe. We are all artists and we all are creative. We might not all be in touch with those parts but if we look for both, they are there. I love how matter-of-fact his expression is...like we should know this. He also embraces his individuality. There is a tiny piece of burlap behind him plus old book text and some stencilling from TH's Measured stencil. 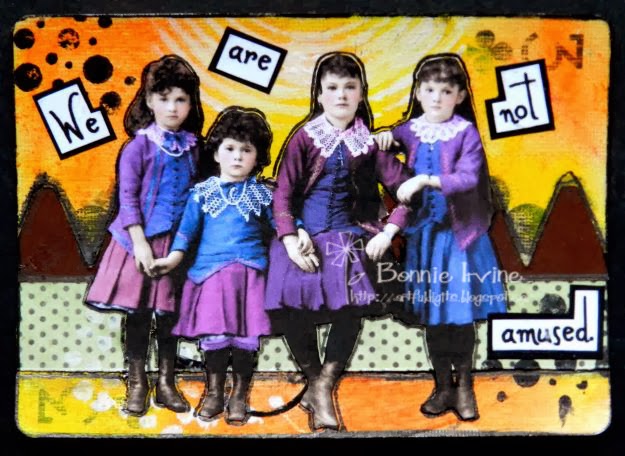 The third playing card just makes me smile because the girls who I imagine as sisters look so serious. I wonder if their brother is teasing them again or if Uncle Ted just pranked them.The stencil at the top of the sky is from TCW's Well Rounded template. The brown trees behind them are part of the leftover or negative piece from a die cut which was sitting on my desk waiting its turn to make art.

That's it for me today. I thank you for visiting and for the wonderful and supportive comments you leave me. I do appreciate them. I hope you get a chance to get messy and play soon.

Stunning creations Bonnie! What else can I say! Not only are the images well chosen, but your journalling really is spot on!! Hugs, Ira x
Ira’s Crea Corner

Yes, the post title really tickled my fancy!! And I love the altered card trio - especially the unamused young ladies (fabulous colours on that!)...
Alison xx