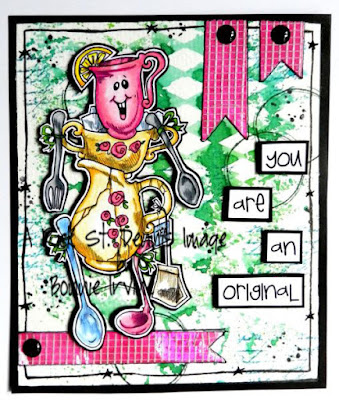 Hello everyone. Today I am sharing a mixed media journal page featuring a Rick St. Dennis image which would also fit the current Facebook theme in the Fans & Friends group, Metal Magic. The image is called Kitchen Robot 4 and it makes me smile. I imagine all of these robots who come to life like the toys in Toy Story. Imagine the fun they must have! 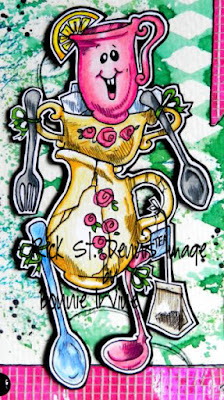 I coloured this image with a mix of Prismacolor and Polychromos pencils. It was then fussy cut leaving a narrow white border and then matted with black cardstock. Once it was trimmed out again, foam tape was added to the back for dimension and to create a shadow around it. 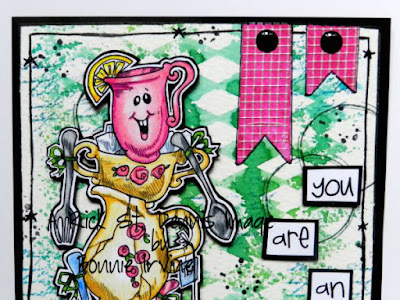 The background was created on a 5 x 6 inch piece of watercolour paper. bells of ireland Green and Cathedral Pines Green Lindy's Starburst Sprays were spritzed through TCW's Harlequin Stencil and then quickly lifted off the paper. A light misting around the stencilled pattern was done to soften the pattern and fade it out. One of the images on Stampotique's Circle Cube was stamped onto the background with Library Green Archival Ink. A TH text stamp was applied to the background using Forget-Me-Not Achival Ink. In order to give KR4 a place to stand, drywall mesh tape was layered over a mop-up card and cut into three fishtail flags. These were edged with Big Brush Pen to remove the white edge before being adhered in two areas. Black enamel dots were added to the outside edge of each. 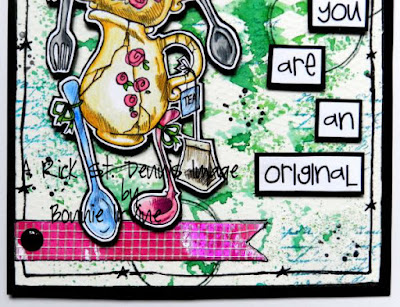 The sentiment was computer generated and printed on white cardstock. It was trimmed close to the single words, matted with black, and then foam tape was added to the backs. A simple star border was doodled around the page edge and the flags were outlined. To complete the page, a black mat was added to the outside after the white edges of the page were lined with Black Big Brush Pen.

Thanks for joining Kitchen Robot 4 and me today. We are delighted that you did. You can check out the Metal Magic Facebook Challenge here. You have until the end of March to enter and we'd love to see you then.