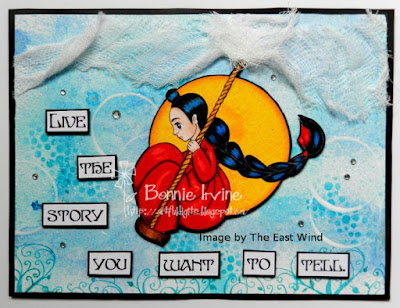 Hi everyone! As soon as I saw September's  newsletter freebie image from The East Wind which is called Borum, I was reminded of a song my mom used to sing when I was little... Shine On Harvest Moon. That's where Challenge # 62's theme came from. For the Shine challenge, we want to see either a sun or a moon or to see something shiny on your project. Easy Peasy! 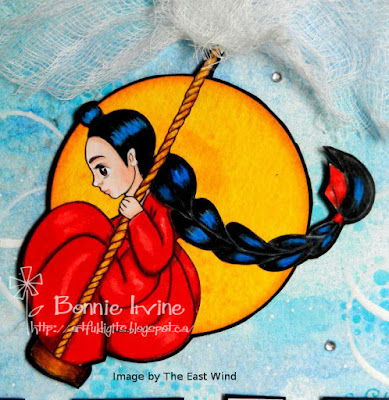 Borum, himself, was coloured with Prismacolor and Polychromos pencils. He was then fussyc ut without leaving a white border. The sun/moon was die cut from a piece of white cardstock which had been spritzed with Yellow Rose of Texas, Marigold Yellow Orange, and California Poppy Gold Lindy's Starburst sprays which contain mica. Borum was adhered to the sun/moon and then the entire image was backed with black cardstock which was trimmed leaving a narrow border. This added strength to his braid and the rope as well as making the image contrast with the background. Foam tape was added to the back to pop him up. 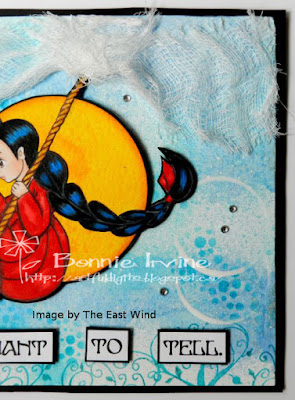 The background, a 6 x 8 inch rectangle of mixed media paper, was spritzed with Electric Blue Tattered Angels, Ocean, and Teal Color Shine sprays. Once dry, Forget-Me-Not Archival Ink was applied through TCW's Microbial Stencil in several areas. It was also used on a rubber stamp of a leafless tree and stamped across the bottom of the page. This was to indicate how high Borum is swinging. White gesso was watered down slightly and used with a bottle lid to create the white rings. More of the same watered gesso was splattered over the background using a fan brush. Clouds were added to the top of the page with cheesecloth scraps.To add further shine to the page, several sizes of clear rhinestones were scattered across the sky around Borum. 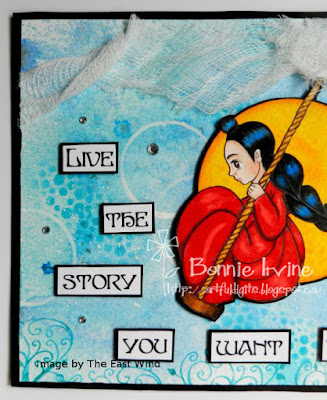 Thanks for joining Borum and me today. That was lovely of you! To see the other fabulous DT creations featuring this same newsletter image, pop over to The East Wind blog where they are all on display. We would love to have you play along with us for our Shine challenge.

How beautiful this turned out!! Looks great and love all of your details.