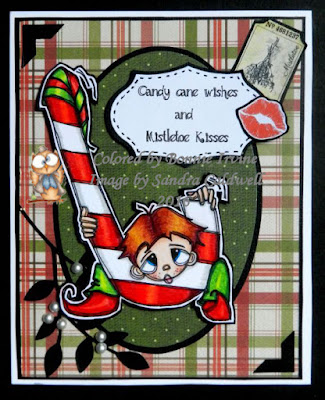 Hi everyone! One of the new releases today in Sandra Caldwell's Etsy shop, Babycakes Digis and Designs, is this adorable image called 1068 Tiny Candy Elf. He makes me smile with his sweet little face and that gigantic candy cane he is supporting. He looks plum tuckered out! I decided he would be a wonderful star of another Christmas card. 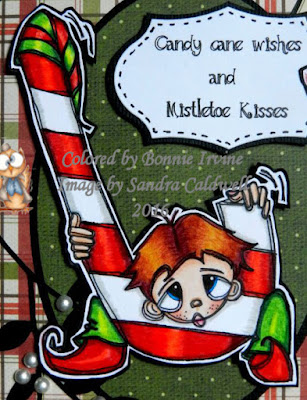 I coloured Tiny with Prismacolor and Polychromos pencils. He was fussy cut leaving a narrow white border and matted on black card stock. Again, a narrow border was left when he was trimmed out so he would contrast with the background. It also gives extra strength to those signature marks Sandra includes in her fabulous drawings. Foam tape was added to Tiny's back to pop him up and create natural shadow. 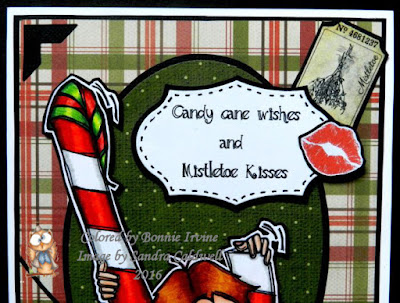 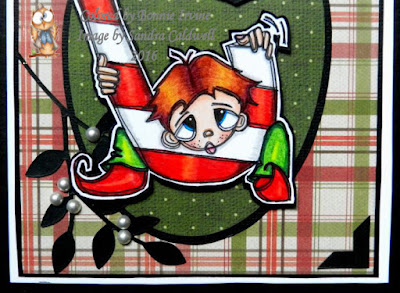 A black die cut leafy branch was added to the bottom left corner to represent mistletoe and white half pearls became the berries. To balance the card design, two black photo corners were punched and adhered to opposite corners. I kept the design fairly simple because I like Sandra's sweet images to really be the eye-catching focals without a lot of competition from other embellies...just personal preference.

Thanks for visiting with Tiny Candy Elf and me today. When you get a chance, pop by Sandra Caldwell Stamps Fans Facebook group to see the other amazing new releases she has for us this week. The DT have created some wonderfully inspiring projects to showcase them.To check out the rest of Sandra's awesome images, pop over to her Etsy shop, Babycakes Digis and Designs.  There is such a delightful collection of wonderful quirky images in Sandra's signature style that you are sure to find some Must Haves!

Hi Bonnie...what a awesome , presentation, all your information is wonderfully written. And of course...your creation is fabulous ! Bravo and Thanks so much!! Sandra