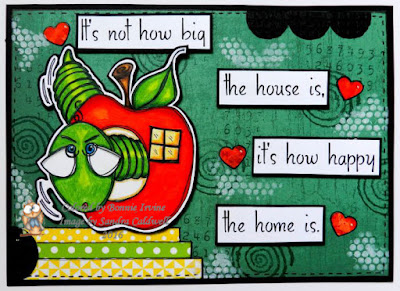 Hi everyone! One of my many favourite things about fall is that the apples are absolutely yummy this time of year. I cannot say though that I enjoy finding my apple already occupied...even if it's by a worm as cute as this one. This is a new release by Sandra Caldwell called 1101 Wormie Apple Condo and it will be in her shop, Babycakes Digis and Designs, later on today. This worm makes me smile...others I have met in real life...not so much! LOL 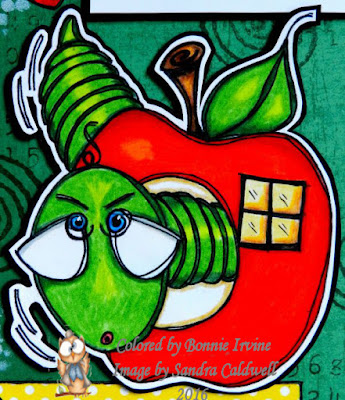 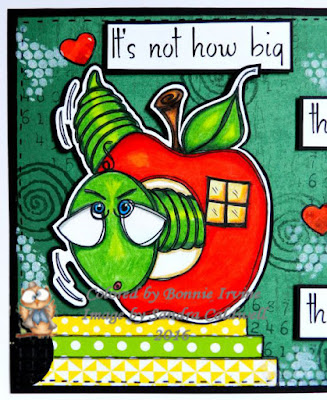 The background began as a 6 x 8 inch rectangle of green card stock. I am still working away at using the scads of coloured card stock and designer paper in my stash. I stamped the numbers and spiral, both from VLVS, with Library Green Archival Ink to break up the background and add a little mixed media flavour to it. White acrylic paint was pounced through  TCW's Mini Texturized stencil in several placesto brighten the background and add texture. Three lengths of washi tape were adhered to white card stock and then layered under Wormie so he had a place to rest his home. 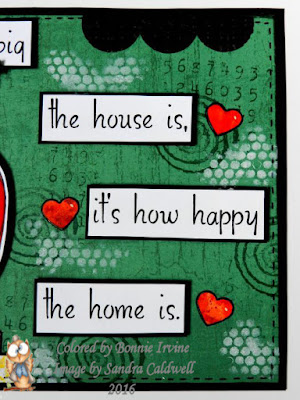 The sentiment was printed onto white card stock, matted with black, and each segment was popped up on foam tape. Small hearts were punched from red mop-up paper, edged with black ink, and adhered next to each part of the sentiment. Two sizes of black circles were cut, embossed with a folder, and half of each was glued to the edges. The rest was trimmed even with the edges. Black faux stitching was added as a simple border. Black Big Brush pen was used to remove the white edge of the card stock background before it was adhered to a black mat which framed the page.

Thanks so much for joining my little Wormie friend and me today. He promises to tell his friends to stay away from your apples because you visited. To see some of the other new releases, be sure to pop by Sandra Caldwell Stamps Fans Facebook group where the rest of the DT will be sharing their creations with other new releases. Later today, you will want to hop on over to Sandra's Etsy shop because not only these new releases will be available, but she often sneaks in a couple of surprises, as well. There are images for every occasion and inspiration galore there!

Awesome and informative...great job and Thanks Bonnie ! Hugs Sandra