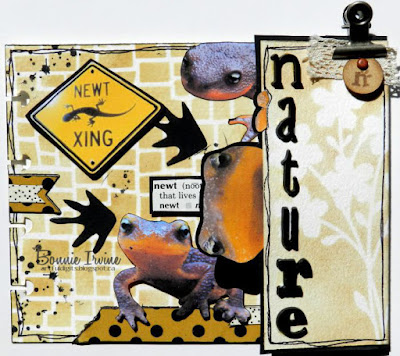 Hi everyone. It's Week 13 over at the 2018 Joggles Art Journal Adventure Facebook group and it's Barb's turn to choose the weekly prompt. She has chosen the Letter N with an optional twist of including an animal or part of one. I decided that my N would stand for Newt and Nature because newts make me smile like most lizards do. The next page in my disc bound journal is a bit of an odd size. It's actually 4.5 x 8 inches but I had folded a flap at the 2 inch mark which presented its own challenge. 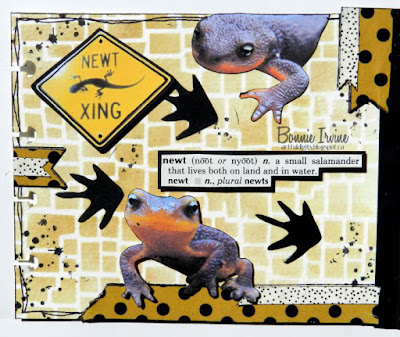 I began by stencilling the 4.5 x 6 inch section using Vintage Photo and Gathered Twigs Distress Oxides and Stamperia Wall Effect stencil. Three newt images were fussy cut, two for the main page and one to peek over the flap. They were all inked with black Big Brush Pen to get rid of the white edge around them and the one full image was popped up with foam tape to add dimension. Before he was adhered, two lengths of washi tape were applied to white cardstock, edged with black, and adhered to ground him. Once the other partial newt was adhered flat to the top of the page, two other groupings of the same washi tape were added to create a visual triangle. A newt crossing sign was matted with black and popped up on foam tape as well as three newt footprints which were fussy cut from black cardstock. The definition for newt was cut from a children's dictionary, matted with black, and popped up on foam tape. A Paper Artsy Splotches stamp was applied in places with Jet Black Archival Ink to tie the design together. 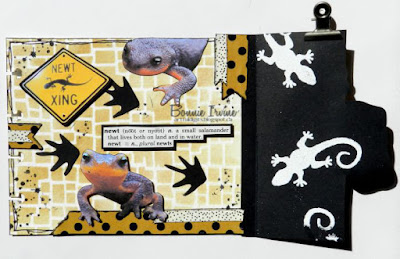 The third little newt face was adhered to the backside of the flap. The inside was then covered in black cardtsock and fussy cut around the newt to frame him and add strength as well as tying in the black footprints, stamping, and washi dots. A lizard stamp was applied to the black cardstock using  Versamark Ink and then white embossing powder was sprinkled over that and heat set. Or so I thought! It turns out that the bottom one wasn't completely melted so part of him rubbed off. I can live with that :) 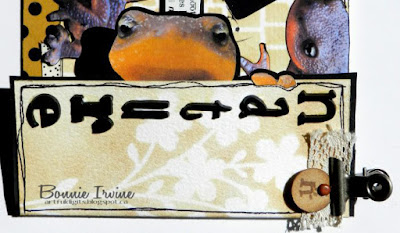 To colourize the front of the flap, a wildflower die cut was layered over the white watercolour paper and Vintage Photo Distress Oxide applied over that. Once the die cut was removed, the negative image of the die cut showed white next to the Vintage Photo. The word nature was created with Idea-ology Ransom Letters and a black doodled border was added to both the flap and the main page uniting them through colour and repetition. 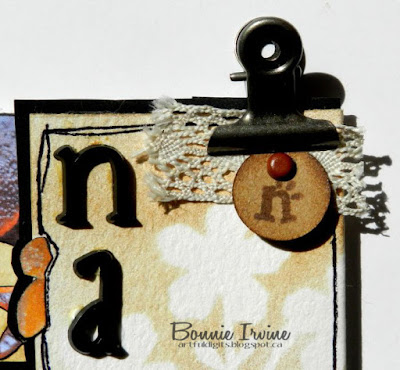 Because I wanted a clip to keep the flap closed, I added a scrap of lace and a tiny tag stamped with the letter N. A tiny brad holds the two together.

Thanks for joining all of the newts and me today. We love that you did. Be sure to check out the other wonderful responses to this prompt as they are added to the Joggles AJA Facebook group throughout the next few weeks. All you have to do is ask to join if you haven't already. Hope to see you there!

Bonnie, What a great page! I love fold outs and frogs, and the extra little touches you added make the page sing. Thanks for the inspiration. Terry

Ut oh - they are newts (but very frog like). Silly me!