Attitude is the Difference - Inspired by a Vera Lane Studio image 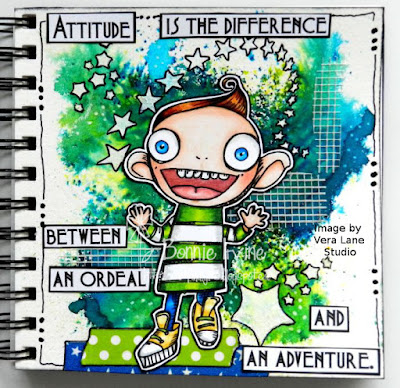 Hi everyone! The first thing I thought of when I saw this fun image from Vera Lane Studio called Little Boy was that he would be awesome on a coffee themed journal page. He looks like he's totally jacked up on caffeine and raring to go. Then I found this amazing quote which made me stop and think (love quotes like that). I knew I wanted to art journal about it because it really rings true for my experience with health issues over the past year. Attitude makes all the difference in the world and staying positive was one of the best gifts I gave myself as well as those around me. I looked at Little Boy in a different light, seeing him as ready to face whatever with a positive frame of mind and a sense of "bring it on...I've got this!" He's jacked up on life. Now I love him even more :) 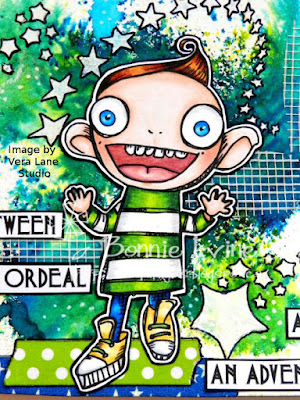 I coloured Little Boy (LB) with a mix of Prismacolor and Polychromos pencils. He was then fussy cut leaving my usual narrow white border, and matted with black cardstock to create a narrow black border as well. I create very busy backgrounds and this double border frames the image and helps it stand out against the colours and patterns. 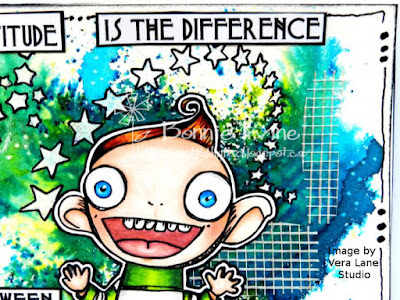 The colours used on the image became the jump off point for the background. I sprayed the 6 x 6 inch watercolour paper with water to hold the crystals in place, sprinkled Brusho crystals (Turquoise, Lime, and Leaf Green) here and there, and then spritzed with more water to blend and create drips. Once dry, a baby wipe was used to remove some of the paint in several places by rubbing it through the openings of Badass mini stencil 2013. This lightens those areas you are scrubbing and leaves a pattern behind. Next I figured out approximately where LB would be positioned on the background and applied Ranger Texture Paste through Badass mini stencil 1037 which is the trail of stars and the star clusters. To brighten them, white acrylic paint was stencilled over the Texture Paste once it was dry. Black pen outlining helped the stars stand out. 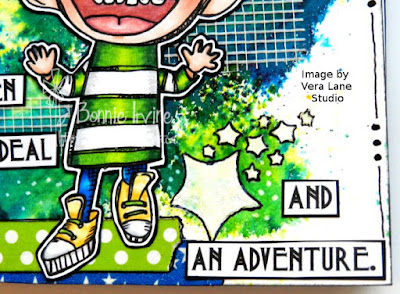 Before the image was adhered to the page, pieces of drywall mesh were placed in three spots to help lighten some of the more solid areas. Two different washi tapes were overlapped to give LB a place to stand so he wasn't floating. The wording was printed on white cardstock, cut into segments, and matted with black before being adhered around LB. White paint pen dots were added in a few areas, again to break up and lighten the background. Jet Black Archival ink and Black Big Brush Pen were used to edge the page helping to frame it. A  doodled border was added with black pen to finish off the page. 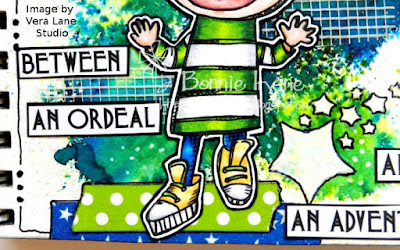 I had such fun with this image and the page. It will serve as a wonderful reminder of how humour and looking for the lessons and good in a situation helped me through some challenging times and usually changed what could have been just an ordeal into an adventure with more good memories than bad attached.

Life is good; so is art.
Bonnie
Posted by Bonnie Irvine at 09:30