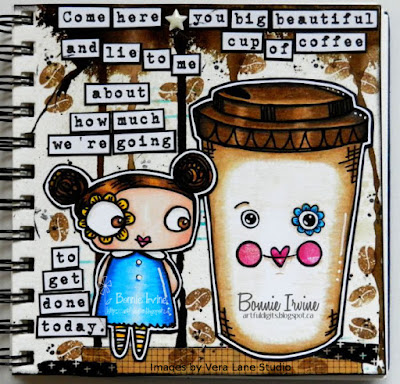 Hi everyone! Those who know me IRL or who follow me here know that I am a huge coffee fan, although I limit myself to two or three a day. As soon as I saw Janet's Coffee Cups images at Vera Lane Studio, I knew I had to art journal with one of them (there's also a boy coffee cup) because I had an awesome saying just waiting for the right images. I searched through the VLS shop to find the one I wanted for the coffee lover and finally decided on Kadee and Kat. I loved how she was looking sideways at the cup, inviting it over. 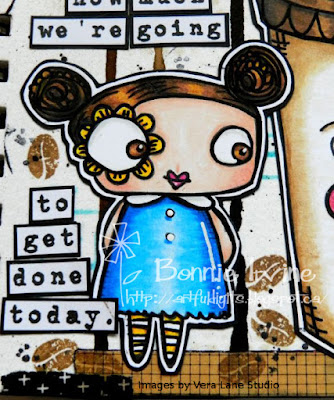 I coloured Kadee and Coffee Cup with a mix of Prismacolor, Polychromos and Luminance pencils, re-outlining and highlighting with black and white Posca pens. Both were then fussy cut leaving my usual narrow white border and matted on black cardstock. 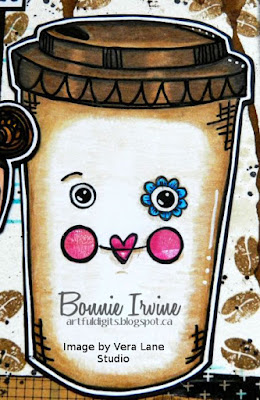 The images were then fussy cut again leaving a narrow black border so that I could go as busy as I wanted on the background and they would still pop. 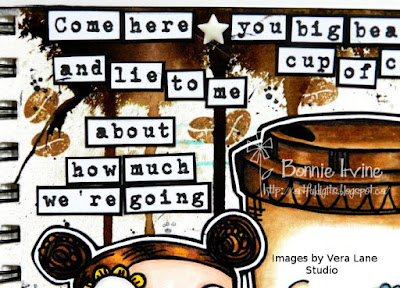 For the background, I dripped Vintage Photo re-inker along the top of the 6x6 inch watercolour page and spritzed with water to get it to drip. Some tipping of the page helped this process along as did a little puffing of air from my TH tool. Coffee Archival Ink was applied through TCW Mini Texturized stencil to create very faint circles in the white areas. Forget-Me-Not Archival ink was applied through Kaisercraft Dots and Dashes stencil to pull the blue from Kadee's dress into the background. 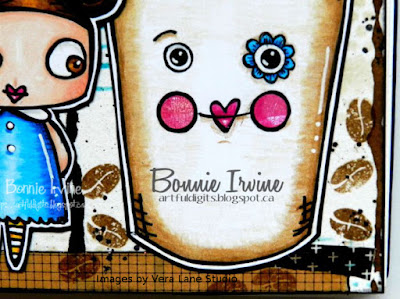 To give Kadee and the cup a place to stand and ground them, two patterns of washi tape were layered along the bottom edge.

The very wordy saying was printed onto white cardstock, cut into individual words which were then matted with black. They were auditioned in several configurations once Kadee and the cup were glued down until finally I settled on this one. Once the wording was adhered, a Technique Tuesday coffee bean stamp was applied here and there using Coffee Archival Ink. The edges of the page were darkened with Black Big Brush Pen and then Jet Black Archival to fade the black into the page a little more. Finally an enamel star was placed between the first two sections of the saying to break it up and also draw attention to how she feels about that big beautiful Coffee Cup :)

Thanks so much for popping by today. Kadee, Coffee Cup, and I appreciate it. There is still a little time if you want to play along with the coffee themed ATC swap on the Vera Lane Studio Facebook group. I would if it wasn't for our rotating postal strikes in Canada. The entries in the album are fabulous and great sources of inspiration :)

Life is good; so is art.
Bonnie
Posted by Bonnie Irvine at 10:46