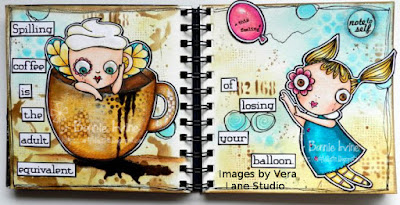 Hi everyone! I found this great quote I used in today's double art journal spread that made me laugh and then I went searching through Vera Lane Studio images to find images to tell the story. I decided upon Latte from the Cocoa and Latte set, June from Hello June, and the single balloon from the Cheers set. 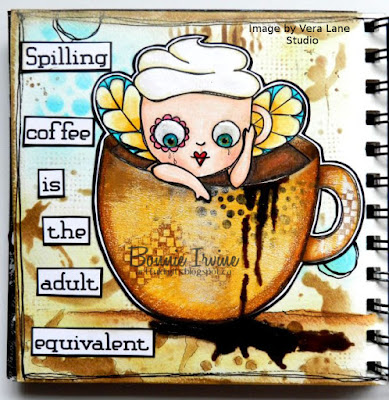 Latte was printed once on white cardstock and coloured with Prismacolor and Polychromos pencils. Clear Wink of Stella was used to add shine to her whipped cream, Glossy Accents added dimension and shine to her eyes, and silvery gel pen added sparkle to her wings. The white cardstock image was then fussy cut leaving a narrow white border, matted to black, and fussy cut again leaving a narrow black border.The cup was printed again onto a gel printed piece of cardstock, fussy cut, and shaded with Clean Color brush pens and Inktense pencils. The cup was then adhered to the other matted image. 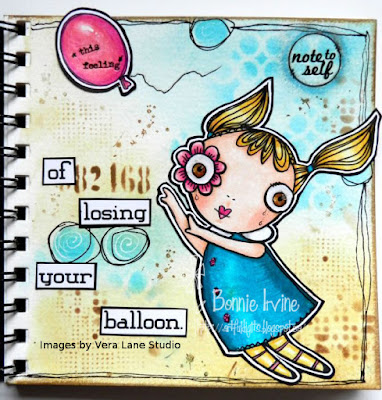 June and the balloon were printed onto white cardstock and coloured with Polychromos and Prismacolor pencils. Glossy Accents was added to June's eyes and Magenta Stickles added to her buttons. Both were fussy cut and matted leaving my usual borders. 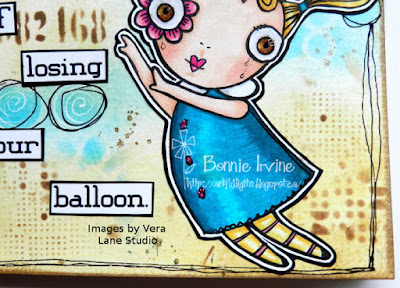 Colour was applied to the watercolour background paper using an ink blending tool and Gathered Twigs and Broken China Distress Oxide Inks. Stencilling was added to the background using Coffee  and Aquamarine Archival Inks and AALL& Create stencils (6, 39, 45) as well as Tim Holtz Splatters stencil which was applied with Gathered Twigs Distress Oxide. Black and white Posca paint pen was added to the larger stencilled circles. Chai Gelato and Walnut Brown Big Brush pen were used to darken the outside edges of the pages. 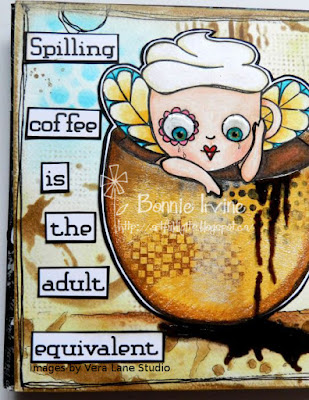 The wording was printed onto white cardstock which was matted to black once it was cut into individual words. To get the spilled coffee effect, Coffee Archival Re-inker was applied to both Latte's cup and the ground beneath it. Once dry, Glossy Accents was added over the ink to make it look wet and to add dimension. The ground was doodled in and Inktense pencil was used to shade it so the cup was not floating. A couple of rub-ons were added to June's page with the Note to Self one shaded with Gelato and circled with black pen. The same black pen was used to doodle a scribbly border to finish the page.

Thanks for joining Latte, June, and me today. We appreciate it and hope that your coffee either remains in your cup or moves nicely to your tummy and that you are able to hang onto your balloon :) No more crying over spilled coffee!

Life is good; so is art.
Bonnie
Posted by Bonnie Irvine at 11:01