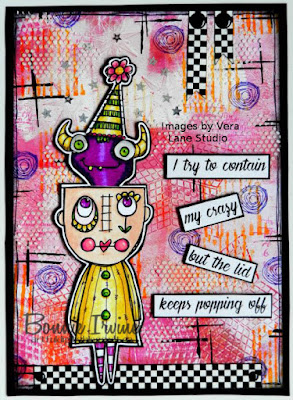 Hi everyone! Happy New Year! Once again, I found a saying that made me laugh and I went in search of a way to illustrate what I thought that would look like. Of course, I turned to Vera Lane Studio images because I can always find what I want. I chose to combine three separate images: the Homemaker for the main part, one of the Holiday Monsters for the crazy popping out of her head, and a hat from Girls & Cat with Party Hats because the little monster is happy in his craziness. 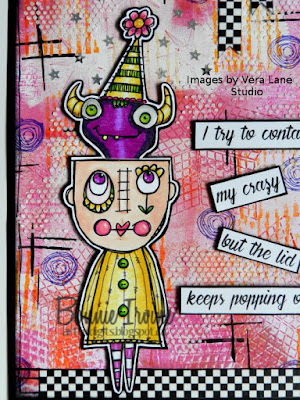 I coloured the three images with Prismacolor and Polychromos pencils. I was going to merge the images but instead kept them separate and combined them after they were fussy cut leaving the white border. I then adhered them all to black cardstock as one image and cut them out leaving a narrow black border. Low tech but it worked for me :) Diamond Stickles were added to the flower center and Glossy Accents to Monster's eyes. White Posca pen was used to make the catch lights in the eyes. 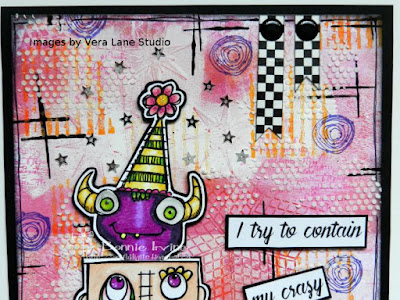 The  6x9 inch background began as a gel print from my stash. I believe I used Medium Magenta, Cadmium Orange Hue, and Titanium White Liquitex Basics acrylic paints along with foam stamps and plastic canvas shapes (it was created a long time ago). To add more detail, I used two stamps from Indigo Blu Tasty Textures set along with Tiger Lily and Magenta Hue Archival Inks. I also used Deep Purple Archival on a stamp from AALL & Create's Dot Matrix set. Black gesso was added to the background with a gift card and once dry, Texture Paste was scraped through TCW Tiny Circles stencil. 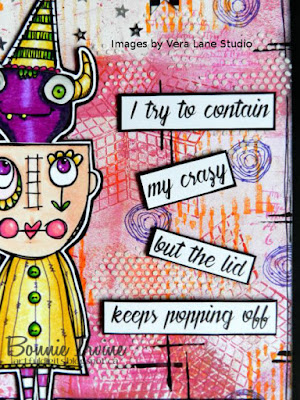 The saying was printed onto white cardstock, cut into sections, and matted with black. Foam tape was applied to the back of the images and the wording to add dimension and natural shadow. Checkerboard washi tape was adhered to white cardstock and trimmed to create fishtail flags and a base for the Homemaker to stand on. Black enamel dots were adhered to the flat ends of the washi...love the shine that adds. To emphasize the Monster's crazy partying, silver star sequins were glued around the party hat. I love how concerned she looks and how totally relaxed and wacky he looks. The piece was finished with Jet Black Archival and a doodled border applied to the outside edges of the page before the whole thing was matted with black to frame it.

Thanks for joining the Homemaker, Holiday monster and me today. We appreciate that!

Life is good; so is art.
Bonnie
Posted by Bonnie Irvine at 13:49