Out of Order ~ inspired by a Vera Lane Studio image 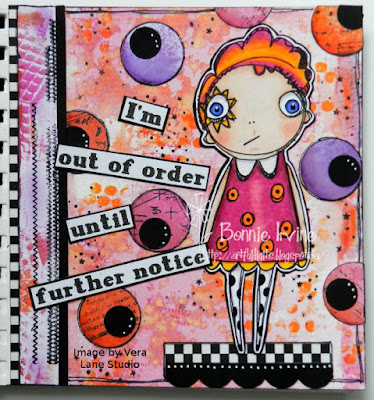 Hi everyone! I've been playing with yet another Vera Lane Studio image and a different technique to add colour to an art journal page. The image is called Luz Cannon and she comes with two hats and a bow as well as a sentiment. I think she has this wonderful deer-in-the-headlights look like she has just shut down for the time being. Most of us can relate to that at some point.

I coloured Luz with Prismacolor and Polychromos pencils adding black Posca Pen dots to the circles on her dress. As usual, I outlined the black lines after colouring to bring back the contrast because the pencils really dull them. She was fussy cut leaving a narrow white border, matted in black, and fussy cut again leaving a narrow black border. 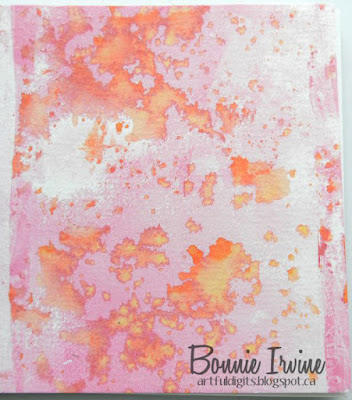 Colour was added to the 6x6 watercolour background using a 5x7 inch gel plate. Picked Raspberry Distress Oxide Ink was picked up with a brayer and loaded across the gel plate moving from one side to the other and reloading to spread and intensify the colour. While the Distress Oxide ink was still wet on the plate, Orange Brusho which had been spritzed with water on my craft sheet was spattered over the loaded gel plate using a fan brush. Then the gel plate was flipped over and pressed to the page. This makes the coolest random pattern and is totally a surprise when the plate is lifted off the page. 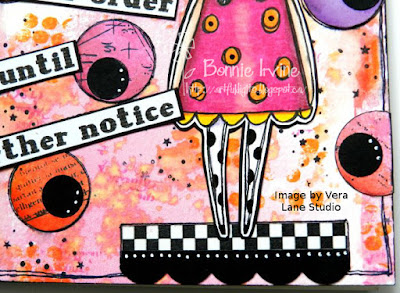 More texture and pattern was added with Magenta Hue Archival Ink applied to an Indigo Blu Tasty Textures script stamp as well as Tiger Lily Archival Ink being applied to AALL & Create Dot Matrix stamp. To repeat the circle pattern in Luz's dress as part of the background, one inch circles were punched from mop up stamped papers covered in Lindy's Starburst sprays. The outer circles were shaded with Neocolor II crayons activated with water. Half inch circles were punched from black cardstock, added off center to the coloured ones and highlighted with white paint pen dots. The outer edges of the coloured circles were blackened with Big Brush Pen. To give Luz a platform to stand on, a length of checked washi was adhered to a black punched border and dotted under the seam where they meet and placed beneath her feet. 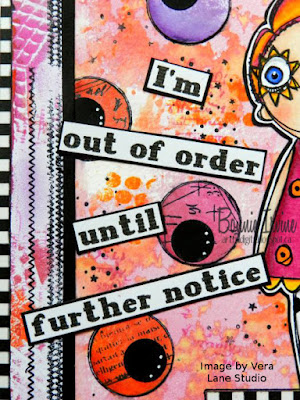 Another strip of gel printed paper in the same colour palette as the background and Luz's hair was stamped with stitching (49 and Market) and bordered with black cardstock on the right side and checked washi on the left side. Purple, orange and pink gelatos were used to add a bit more colour on the white spaces as well as to the background of the page. Luz was glued in place and Jet Black Archival Ink was used to add some VLV scattered stars and dots in the blank spaces. The wording was printed on white cardstock, cut into sections, and matted with black. To finish the page, a border was doodled around the page and black Big Brush pen was used to darken the edges.

Thanks for joining Luz and me today. We appreciate that! I am of course speaking for her because she still seems to be out of order. Maybe tomorrow will be better for her :)