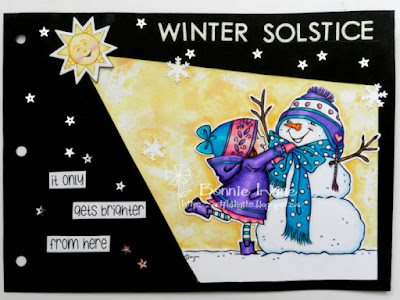 Hi everyone! It's Week 51 of the Joggles Art Journal Adventure. One more week after this and we will have completed all 52 of the year's prompts. The one for this week is Winter Solstice or just plain Winter since Saturday marked the shortest day in the year for this part of the world. I am one who is really affected by the lack of light, to the point where I use a special light each day over the winter months, so I am really happy that the days will start getting longer from now on. Bring on the light! LOL 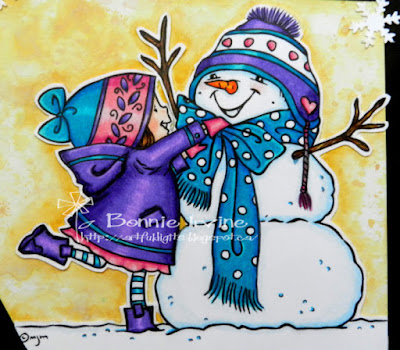 I chose a Mo's Digital Pencil image called Happiness is as the focal for this page. We have had lots of snow and very cold temps lately so that seemed like a natural fit for a page about the official start of winter. I coloured the image with a mix of Prismacolor and Polychromos pencils, fussy cutting around the sweet girl and her new friend leaving a white border and also leaving some extra white at the bottom for the snow on the ground. 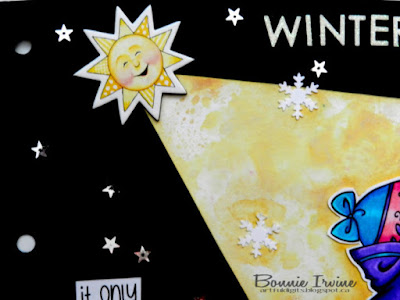 I wanted to create a large ray of sunlight coming from the sun which is a Mary Engelbreit chipboard piece. I wanted the rest around the ray to be black to show that there's only a small portion of daylight and a bigger portion of darkness each day. I drew an angle on mixed media card coming from the sun and just wide enough for the image to fit. Once it was cut out, the angled section was dipped first into Antique White Distress Oxide + water on my craft sheet and then Scattered Straw Distress Oxide Ink + water. This was repeated a few times, drying between layers until I was happy with the build up of colour and pattern. The Scattered Straw was also applied just to the edges of the angle coming from the sun to darken them slightly. 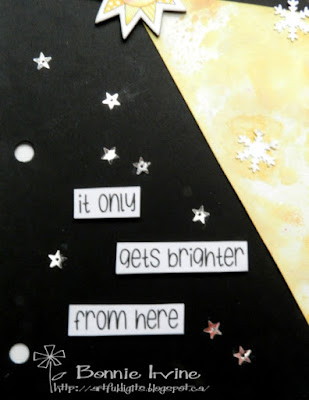 Once the sun, ray, and image were adhered in place, a few punched snowflakes were added to the sunny part. Shading around the image and the flakes was added with Neocolor II crayon and a water brush. The lettering for Winter Solstice was added with glittery white stickers and the saying was printed onto white cardstock which was popped up with foam tape. Metallic silver sequin stars were scattered around the black areas to make it seem more like a night sky.

Thanks for joining us today. All four of us appreciate that as well as those extra few minutes of daylight we gain each day :) I hope to see you next Monday for the final Art Journal Adventure post!