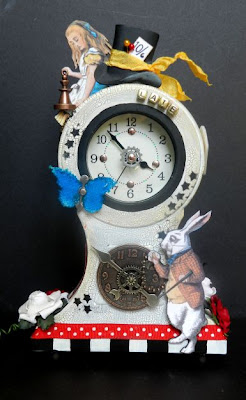 Yippee! Since it's the first Thursday of the month, it's time for a new Get Altered challenge at the eclectic Paperie blog. The very talented Erin is hosting and she has chosen the theme of altering a clock. That is a seriously cool challenge idea! I had an old alarm clock (about 8" high x 4.75 " wide at the base) that wasn't being used any more so it was enlisted as the clock to alter. 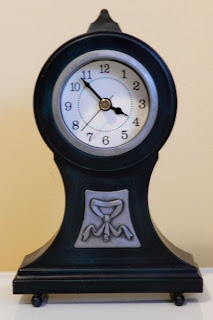 I took the mechanism and glass out and applied a coat of Decou-Page and then a coat of white gesso to the outside of the shell. The next step was to coat the entire clock with an uneven coat of Picket Fence Distress Crackle paint. I wanted it uneven so that the width of the cracks would vary. It was left to thoroughly dry on its own (no heat gun) before continuing. Once dry, Vintage Photo Distress ink was applied to all edges to age the clock and grunge it up a little. 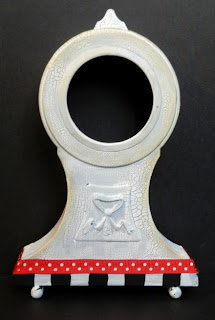 The base was painted in a striped pattern using black and white gesso. The bottom feet were painted black and red grosgrain ribbon with white dots was adhered to the grooved channel just above the base as a reference to the Red Queen. 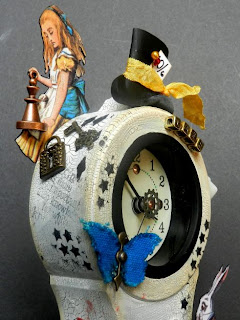 Black gesso was randomly pounced through TCW's Mini Punchinella stencil for the stars and through Dylusions Diamond of a Border stencil for the harlequin diamonds. For added texture, the imagination quote from Tim Holtz's Flights of Fancy set was partially stamped here and there using Black Archival ink. Red colorbox ink was used to add splatter dots in a few places. I didn't take pictures as I went along...I was having too much fun to remember but you can see the layers in the photos. 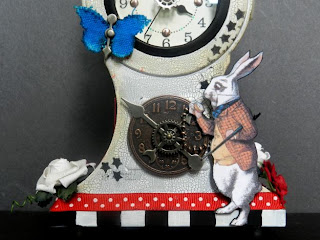 I fussy cut Alice and the White Rabbit from some images purchased on Etsy (JLeeLoo) and then mounted them on two more layers of black cardstock for strength. I purposely cut off Rabbit's watch chain so that I could add some Idea-ology ball chain in its place. Before Rabbit was adhered, an Idea-ology clock face was layered with two game spinners and a mini gear to create the whimsical clock used to cover the raised bow charm on the original clock. 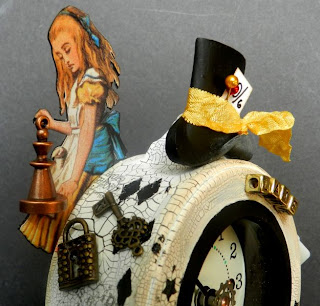 Alice was  given a chess piece charm to hold, a nod to the Queen's chess game from the book, and a spot was left for her to sit on top of the clock. She couldn't be glued on until the clock innards were returned. The Mad Hatter's top hat is a Wendy Vecchi Blossom Bucket embellie. A length of yellow seam binding was wrapped around it and tied at the back. Two straight pins with large heads were cut down to tuck inside the band. The 10/6 card was cut, hand numbered, and inked with Vintage Photo before it was also tucked into the band. The hat was adhered to the finial type piece at the top of the clock both for support and to hide that original bit. 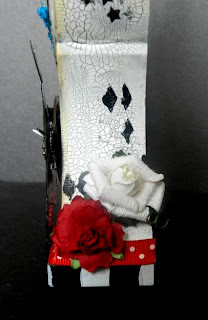 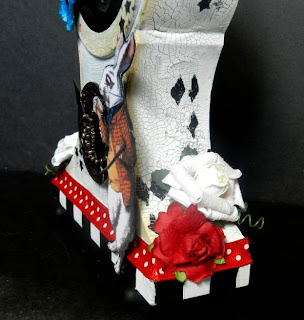 To create the flowers from the Queen's garden which were white and she had painted red, paper flowers were adhered to the bottom of each side since that's the garden area :) 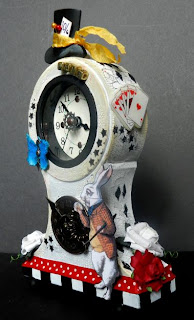 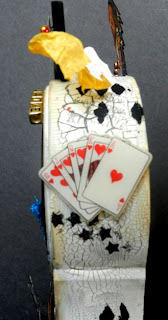 A button with a hand of hearts cards, another reference to the Red Queen, was adhered to the right side of the clock. 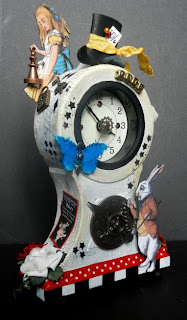 A lock and key charm was adhered to the top of the left side to remind me of the locked door and the key Alice had so much difficulty with. At the bottom is a small sign which reads, "No wonder you are late. Why, this watch is exactly two days slow" with a small image of Rabbit in his court uniform under the quote. 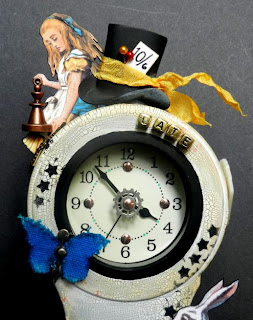 Absolom, the blue butterfly and former caterpillar, is a Maya Road canvas butterfly sprayed with Dylusions London Blue and Vibrant Turquoise. The body is another Idea-ology game spinner.  The clock mechanism from the original clock was given copper nailhead stickers at the 4 quarter points plus a gear topped by another nailhead sticker dressed up the center where the real hands are attached.The final embellishment to finish the clock was the addition of the gold beads which spell LATE. Poor Rabbit!

Oh my word, I had fun with this challenge. I am a huge fan of clocks and Alice in Wonderland so I was in my glory. Be sure to pop over to the eclectic Paperie to see what Erin created for this challenge. You will be able to see the rest of the DT makes by clicking on the Linky buttons with their names and DT underneath. I really am excited to see what you create, as well. You know you wanna play along! Thanks for visiting today, for reading another lonnnggg post, and for joining me on this awesome creative journey.

I am entering this clock in the following challenges:
Flutterby Wednesday ~ #234 Flowers
Creative Craft Challenges2 ~ #7 Alter It
Through The Craft Room Door ~ April2-8 Anything Goes
Simon Says Stamp and Show ~ A Very Strict Challenge :)

For a direct link to the eclectic Paperie shop and some of the products I used for this project, click on the thumbnails below.

Bonnie...OH MY GOSH, OH MY GOSH!!! This altered clock is AWESOME! I love the shape of the clock. I love how you have altered it with the white crackle paint. I love all of the little random stamping you've done on the clock itself to give it such character. The Alice In Wonderland characters you have added to this piece are just AMAZING! And the little metal elements you've added; the chess piece, the lock and key, etc. add such dimension and interest to an already really cool clock! I so love this! Brilliant make! Thanks for sharing your clock with us at Simon Says Stamp and Show. <3 Candy

oh Bonnie - this is so amazing! First, I LOVE the crackle finish - then the addition of the Wonderland elements is genius! What a fabulous transformation!

Oh Bonnie, this is jaw dropping! I love everything about it.

Oh my word Bonnie! What a totally amazing altered piece........I love Alice and the whole Wonderland story and you have put so much thought into this, adding extra little details which tell the story so well. You are such a wonderful inspiration and this piece is a true piece of art! Love it. Hugs, Anne x

Oh, how brilliant this is, Bonnie! From the fabulous crackle on the clock itself to all those wonderful characters and embellishing details - a really great make - I love it!!
Alison x

Fabulous transformation! Your imagination is working overtime...so many fun elements from Wonderland. Love the crackle finish and the grunged-upness.

Love your clock. A fabulous transformation!

Oh my gosh! Your clock is fantastic! I LOVE your theme, and absolutely love the end result!!!

Woohooo Bonnie..you worked your magic in transforming your clock to a beautiful wonderland..love it!!
Hugs
Tracy
xoxox

OH MY! How clever is this?!

What a creative project! Fabulous!Thank you for playing along with my Flutter By Wednesday Challenge!

Wow, Bonnie, this is amazing! What a fantastic idea to use this to showcase Alice in Wonderland...truly a terrific project!!

Fabulous on so many levels! Thanks for joining us at Flutter By Wednesday this week!
:Dxx

Talk about your wow factor! Your imagination went into overdrive on this one and boy did it work out. Your clock is a true work of art Bonnie. I hope you have this on display cause everyone needs to see it. Hugs!

WOW! you really did a great job on this creation. Thanks for playing with us this week at TTCRD.
Huggs
Sandi

What a fun and whimsical clock. Love the crackle effect here. Great job!

What a super altered item! Thanks for joining us this week at Creative Craft Challenges. NancyD

How can you be late for your important date with this beauty??? FABULOUS alteration...most excellent!!! I love them sitting atop it! The crackle is super!!! WOW...every bit Bonnie! WOW! Thank you for sharing with our anything goes challenge this week at Simon Says Stamp & Show...no joke!!!

Wonderful, wonderful altered clock. It is so stunning, and I'm really luvin' all the details. Your work is top notch. Thank you so much for sharing it with us this week at Flutter By Wednesday.

I LOOOOVE this!!! Absolutely the best clock I think I've ever seen. :) You did such an amazing job on this and I love the fabulous crackle and the element of instant fun and attraction you added to this already cool shaped clock. The theme of AIW is PERFECT!!
hugs,
Lisa x

wow, that is fabulous. Absolutely love the crackling. Gorgeous.