Delight in Every Moment ~ TEW Challenge #18 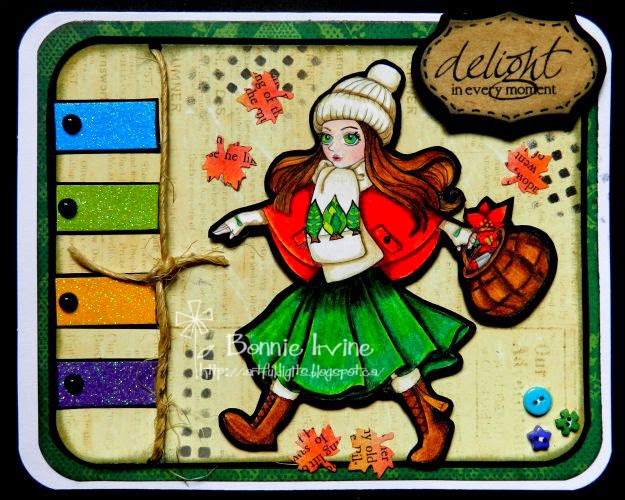 Hi everyone.It's November already and since it's the first of a new month there is a new challenge at The East Wind. All of the DT are using the freebie image, Aurora Go Green, which comes in the TEW newsletter to those who subscribe. Our challenge theme for # 18 is Go Green which can be interpreted as either using the colour green or as recycling. I chose to feature both. I coloured Aurora with Prismacolor pencils and fussy cut her. She was then adhered to black cardstock and fussy cut again leaving a narrow mat. Foam tape was placed on the back to add dimension and shadow. 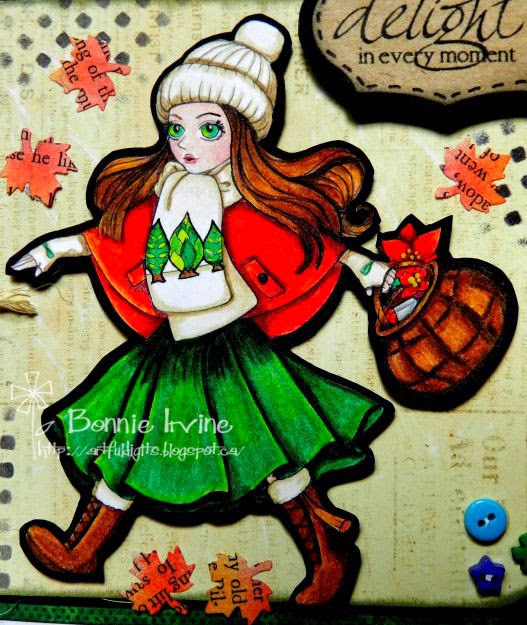 The background began with a white card base and a piece of green patterned paper from my scrap box. The next layer was recycled packaging from scrapbooking supplies, trimmed to fit inside the green rectangle, inked with Black Soot, and matted with black.. All three layers had the corners rounded with a punch. Jet Black Archival was sponged through Dina Wakley's plastic mesh stencil to create more interest on the faded text background. Four tiny rectangles of shimmery paper were cut from the front cover of a paper pad. They were matted in black, adhered to the left side, and embellished with flat black pearls. Two little semi circles were punched in the packaging layer so that recycled cord from a package could be wrapped and tied. The punched areas hold the cord in place. 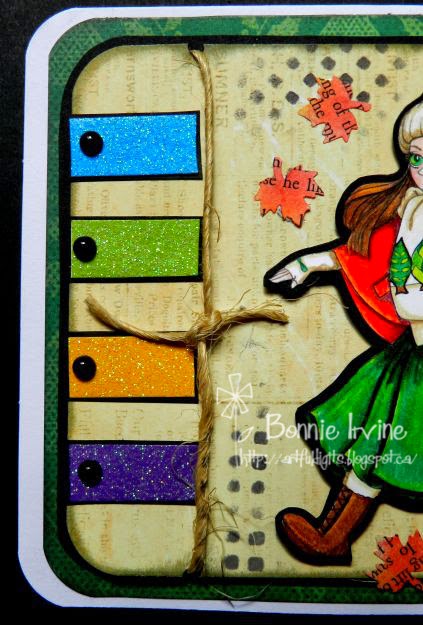 Once Aurora was adhered to the packaging layer, small maple leaves were punched from recycled book paper and coloured with Dried Marigold and Worn Lipstick Distress ink. Three tiny buttons, which are the same as the colours from the sparkly pape,r were adhered to the bottom right corner. The sentiment, from Create With TLC, was printed on kraft paper, cut with an MFT die, and matted in black. A double layer of foam tape popped it up higher than the image.

Thanks for stopping by today. Aurora and I are so happy you did. To see the fabulous versions by the rest of my talented teamies, pop over to The East Wind Challenges blog. We would love to have you play along with us in our Go Green challenge.

Email ThisBlogThis!Share to TwitterShare to FacebookShare to Pinterest
Labels: cards, The East Wind