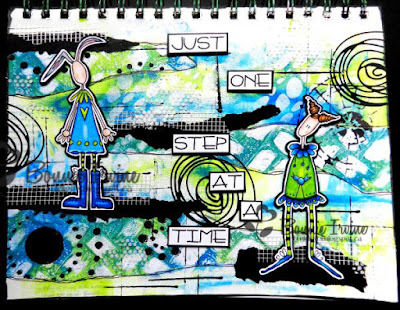 Hi all. I have fallen behind on the weekly prompts for Joggles Art Journal Adventure so I am determined to get caught up once again. Although there is no pressure to do so, I see all of the ones coming up and I want to play so I will do a couple this week. This one today is my response to Barb's Week 14 prompt where she asked us to use either deli paper or designer paper in our spreads. I had some papers which I had gelli printed so I chose one of those pages to tear up and add. 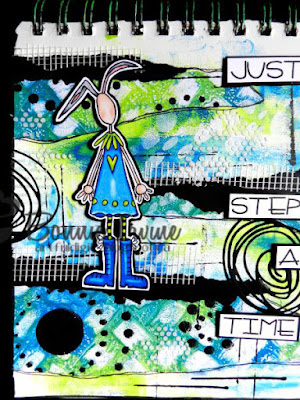 I began by scraping a thin layer of gesso over the blank page using a palette knife. When that was dry, I added Liquitex Brilliant Yellow Green and Cerulean Blue Hue to the page in patches using my fingers to apply it. Once that was dry and I was happy both with the coverage and the amount of white space left, I applied Liquitex Titanium White through Joggles Wander stencil using a mini applicator tool to break up some of the solid areas of one colour. Viridian Archival Ink was used to apply Joggles Nonsense Latin Text stamp in a few areas. This was rolled on so that no hard edges occurred. The strips of gelli printed white paper were adhered to the background with gel medium. Once dry, they were outlined with black pen to help them stand out. Torn black cardstock strips were added next to the printed strips in four places and strips of drywall mesh were added overlapping those. 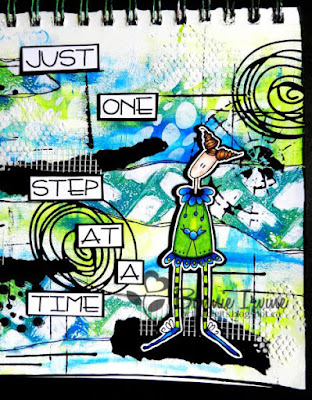 Because the gel printed papers had black circles stencilled in places, I wanted to continue that onto the one which didn't have it. Instead of using the same stencil, I used the circle from TCW's Mini Specimens stencil and applied it with Jet Black Archival ...you can see it on the right side of the page. I also had previously cut three black scribbly circles using a TH die for another project. They did not have a successful audition there but they did for this page. I liked the continuation of the circles but in a different form. 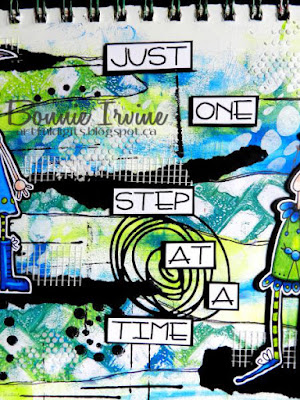 The words were printed from the computer onto white cardstock. Once cut apart, each word was matted with black and popped up with foam tape. Black Marble Dylusions paint created lines with the edge of an old gift card. Once that was dry, the two image, Boots and Curlz, from Stampotique which had been coloured with Prismacolor and Polychromos pencils, were added to the two "steps" near the bottom of the page. The edges of the page were lined with black Big Brush Pen making sure that some overlapped the front to create a frame. The final step was to add a little white embossing paste through TCW's  Tiny Circles stencil in several places.

Thanks for joining Boots, Curlz, and me today. We are all delighted that you did that. We would love to see you play along with Joggles Art Journal Adventure and Barb's weekly prompts. It's a fabulous way to stretch your creative boundaries and there is the nicest group of people sharing their work and supporting each other on the AJA Facebook group.

love the colours, thanks for sharing and how you did it! Sandy