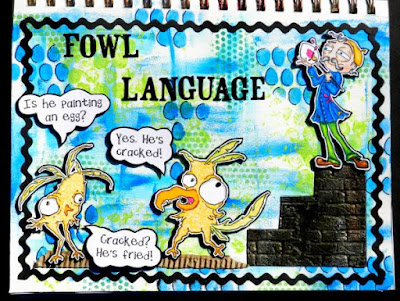 Hi there! I took some time yesterday to play with the next prompt for the Weekly Art Journal Adventure on the Joggles blog. For Week 18, Barb asked us to illustrate a play on words and playing with language is something I enjoy a lot...even if it's corny :) I decided to feature three more of the Joggles/Bloobel Cling Mounted Rubber Stamps because I thought they would play well together and make me laugh...which they did. 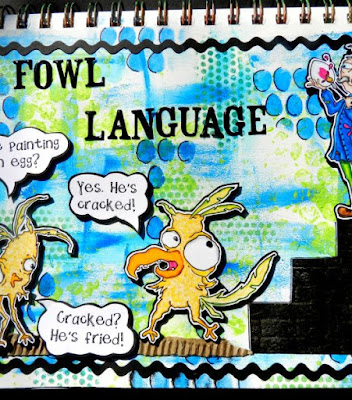 I started the page by scraping a layer of gesso onto it with a palette knife. Once dry, I squeezed three blobs of Liquitex Basics paint onto my craft sheet. I added Light Blue Permanent and Cerulean Blue Hue to the background with my fingers and then spread Brilliant Yellow Green onto some bubble wrap and printed with that. A brush mix of Brilliant Yellow Green and Cerulean Blue Hue was pounced through the small circles of the Punchinella Quintet stencil to add some diffferent tones of the same colours to the background. The oval portion of the Punchinella Trio 1 was stencilled through with the Cerulean Blue Hue. I wanted that egg shape to feature prominently in the background to tie in with the images. The left side of each oval was outlined with black pen. 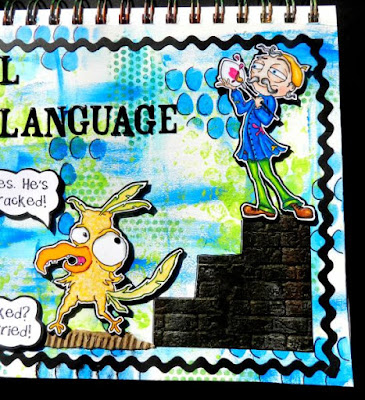 The three Joggles/Bloobel stamps (Potato Head; Spike; The Egg Painter) were stamped onto white cardstock and coloured with a mix of Prismacolor and Derwent Color Soft Pencils. They were then fussy cut leaving a narrow white border and matted with black cardstock before being trimmed again. All three were popped up on foam squares to add dimension and create a natural shadow around them. The Egg Painter needed somewhere to stand and I wanted him away from the birds so I cut a set of steps from a brick embossed piece of black cardstock which had been highlighted with Silver, Bronze, and Gold Treasure Gold. The two birds were given torn pieces of corrugated cardboard (from a coffee sleeve) to stand on because they are in the dirt. 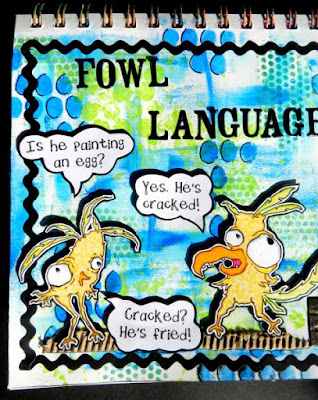 Before placing everyone on the background, a zigzag border was die cut from black cardstock and adhered as a frame for the page. The words in the speech bubbles were printed on white cardstock and hand cut so the pointy bits were in the right places. They were then matted with black cardstock and popped up on foam squares. The title of the spread, which is the Play on Words, was created with puffy letter stickers. The outside edges were coloured with Black Big Brush pen as the final detail.

Thanks for joining the four of us today. I hope this page gave you a smile or maybe even a chuckle. I had such fun creating it. I love imagining conversations between Lisa's quirky characters. To see more of the Art Journal Adventure prompts, be sure to stop by the Joggles blog. Barb puts up a new prompt every Monday and it's so fun to play along. We also have a wonderful group of participants who share their art, ideas, and friendship on the Art Journal Adventure Facebook group. We'd love to see you there.

Bonnie, this did make me smile. I love that you share your process - I learn so many new ideas! Thank you.