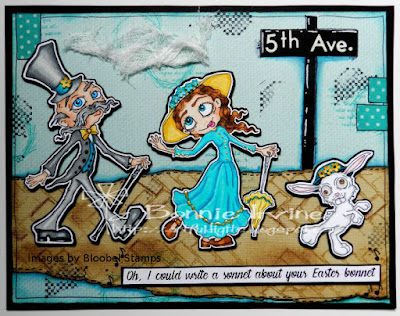 Hi everyone! Each month, Lisa at Bloobel Stamps runs a Progressive Challenge on her Facebook page. If you played along the previous month, you get a discount code for the current month's image so you can play along again. This month, she offered choice of six fabulous images or you could use a different code to buy them all at a special price...which, of course, I did because who can resist! The theme this month is Easter Parade based on that wonderful old Judy Garland/Fred Astaire movie. 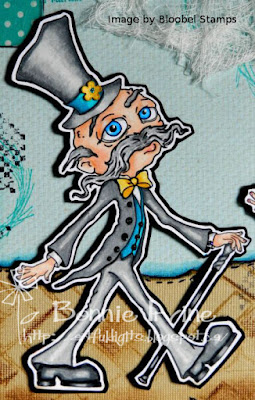 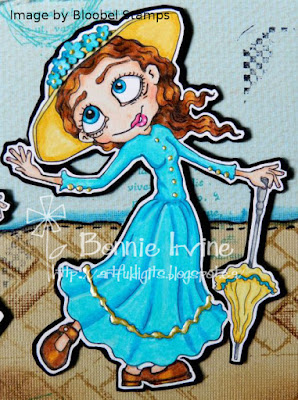 Judy was given Buttercup Liquid Pearls on her dress trim and buttons, and on the flower centers on her hat. The flowers were punched from mop-up atcs sprayed with Lindy's so they sparkle, too. 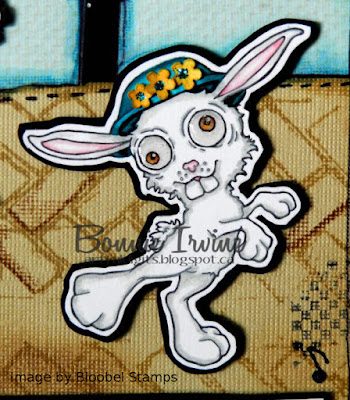 Bunneh was given Lagoon Stickles centers on his hat flowers and his wonky eyes were covered with Glossy Accents to add dimension and shine. Aren't they a well coordinated trio? You can thank their stylist...LOL 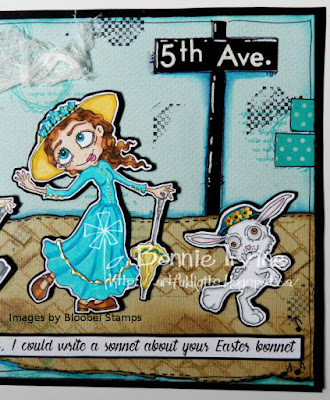 The background of this art journal page began as a 7 x 9 inch rectangle of designer paper. One of the designs from the Stampotique Originals Circles Cube and Joggles Nonsense Latin Text stamps were added with Garden Patina Archival Ink. Carabelle Sudio Mini Checkerboard stamp was added with Jet Black Archival. The sidewalk was a torn piece of textured tan coloured card stock which was stamped using Stampotique Originals Brick Road and Tree Branch Archival. Both Coffee Archival Ink and brown Prismacolor pencils were used to add shadow and darken some of the bricks. The same was used to edge the sides of the sidewalk before it was adhered to the background. Black pen was used to outline it and add faux stitching. A sign post was created with black card stock and white glittery stickers. Next to the sidewalk, Inktense pencil activated with a waterbrush was used to add shadow and dimension. 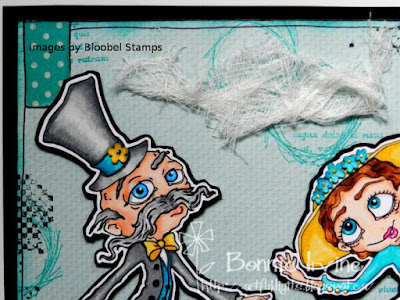 White cheesecloth scraps were adhered above Judy and Fred to create puffy clouds. 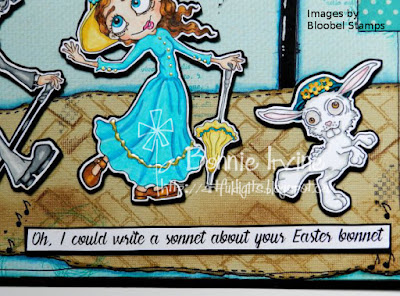 The sentiment, which is a line from the Easter Parade song, was printed on white card stock and matted with black. Foam tape was used to pop it up. Small music notes were drawn with black pen and accented with black rhinestones. The same black pen was used to draw a border around the outside edges. Turquoise washi tape was added to the edges to bring some of that lovely colour from their outfits into the background and add a little more pattern. Garden Patina and Coffee Archival Inks were used to edge the background before Black Big Brush Pen was added. Finally, the page was matted with black card stock to frame it.

Thanks for popping by and watching Fred, Judy, and Bunneh's Easter Parade. It's always wonderful to have a crowd at one of these things :) To check out the other amazing creations made by the people playing along with the Bloobel Progressive Challenge, be sure to pop by the Bloobel Facebook page. It's not too late to join in either. You have until the end of March to enter your creation made with one of the Easter Parade images into the Facebook album. Then you will be eligible for the coupon code for April's challenge. Hope to see you there!