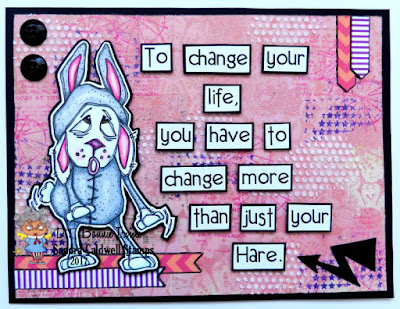 And I'm back! Hi there! Happy St. Patrick's Day everyone! This is the second of two new releases which I had the privilege of playing with this week from Sandra Caldwell's Etsy shop, Babycakes Digis and Designs. This one is called Hare in Hiding 1407 and he cracks me up because his disguise needs some work :) 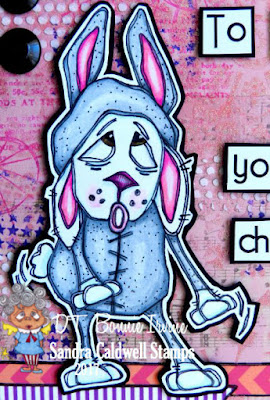 I coloured Harry with a mix of Prismacolor and Polychromos pencils. He was then fussy cut leaving my usual white border, matted with black, and fussy cut again. Foam tape was used to pop him up to create a natural shadow. 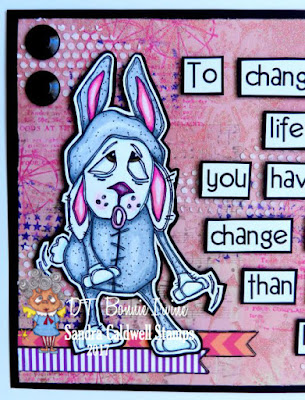 The background began as a 6 x 8 inch rectangle of designer paper which had part of the design embossed. Deep Purple Archival Ink was used to apply Carabelle Studio Star Texture stamp in some places. Magenta Hue Archival Ink was used to stamp one of the designs from Stampotique Originals Kate's Cube. Ranger Texture Paste  was scraped through TCW Tiny Circles Stencil with a palette knife to add to the texture on the background. To give Harry a place to stand, two lengths of washi tape applied to white card stock were cut into fishtails, edged with Black Big Brush Pen, and adhered below him. The other sections were adhered in the top right corner to help balance the design and create flow. 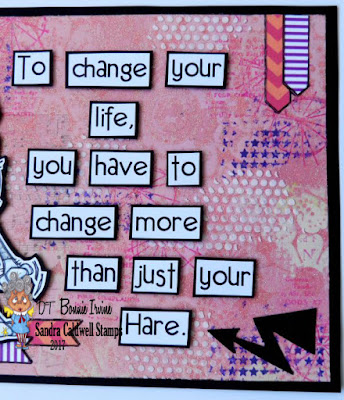 The sentiment, which makes me laugh, was printed onto white card stock, cut into individual words, and matted with black. Foam tape was used to adhere them to the background. Two Black buttons were threaded (no naked buttons here) and adhered to the upper left corner for that pop of black I love so much. This was balanced in the opposite corner with a black die cut arrow pointing to the punny word. Black Big Brush Pen was used to edge the background before it was adhered to a black mat which serves as a frame for the page.

Thanks for joining Hare in Hiding and me today. Wouldn't it be wonderful if all it really took to change your life was to change your hair...LOL To see more of Sandra's wonderful new releases which will be in the shop later today, and also see what our talented DT members did with them, be sure to drop by Sandra Caldwell Stamp Fans Facebook group, where they will be posted throughout the day. Pop by Sandra's Etsy shop, too, when you get a chance. Not only will there be fabulous new releases which are surprises but you can also see the 4 images which are on sale so you can play along with the Bee Silly Facebook Challenge. Hope to see you there!