I Went Pro ~ inspired by a Vera Lane Studio image 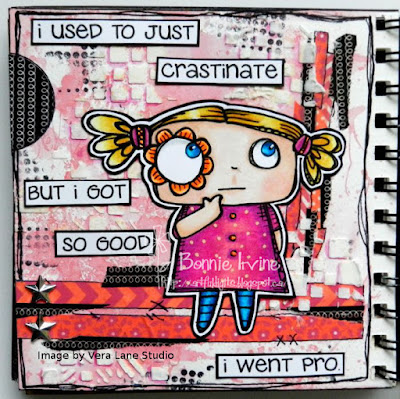 Just Kidding! About the going pro thing... not about the procrastinating thing though! I have that down to a science. Anyway, this saying made me laugh and needed a page in my art journal. I decided to make  Harper from the Bright Ideas image set by Vera Lane Studio the star of this page partly because she is so cute and partly because she looks like she is pondering the wisdom of her decision. 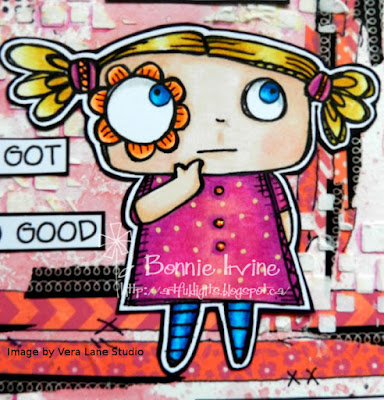 I coloured Harper with a mix of Prismacolor and Polychromos pencils, using Tropical Tangerine Stickles to add sparkle to her buttons. She was then fussy cut leaving a narrow white border, matted with black, and fussy cut a second time leaving a narrow black border. I almost forgot to give her white highlights in her eyes but went back and did it and took another photo after it was done. It makes such a huge difference! 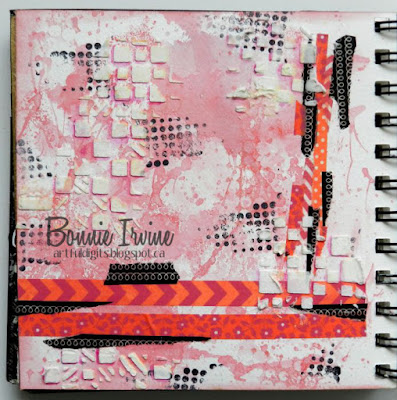 The background began as a 6x6 inch watercolour square. Worn Lipstick Distress Oxide was smushed onto the non-stick craft sheet and then spritzed with water. The page was then dipped into the puddle of ink several times, drying between layers to keep the layers distinct. A dotty stamp from Indigo Blu Tasty Textures was applied using Rocket Red Gold Brilliance ink and a second stamp using Jet Black Archival. Five different washi tape strips and bits were added both horizontally close to the bottom and vertically closer to the right side of the page. The black curly washi was also added to a punched semi circle and glued to the upper left sided of the page. Texture paste was scraped through Carabelle Studio Cosmic Cubes stencil in several places on the page. 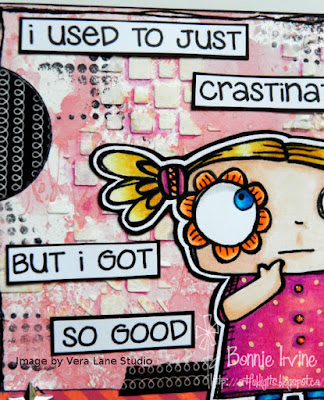 The black curly washi was also added to a punched semi circle and glued to the upper left sided of the page. Texture Paste was scraped through Carabelle Studio Cosmic Cubes stencil in several places on the page and, once dry, pink Neocolor II crayon was applied with a waterbrush to shade next to some of the squares. The wording was printed onto white cardstock, cut into sections, and matted with black. 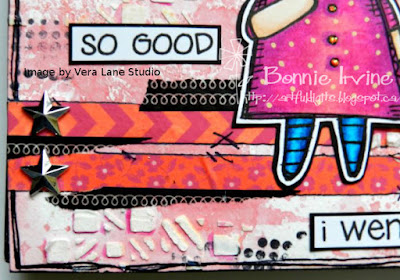 A border was doodled around the outside edges of the page with a Posca Paint pen and Black Big Brush Pen was added to the very edge on three sides. The washi was outlined and doodled on with the same black pen. Two mirrored stars were attached to the left side of the horizontal washi stripes to finish the page.

Thanks for joining Harper and me today. You have made us very happy by doing that!

Life is good; so is art.
Bonnie
Posted by Bonnie Irvine at 16:14