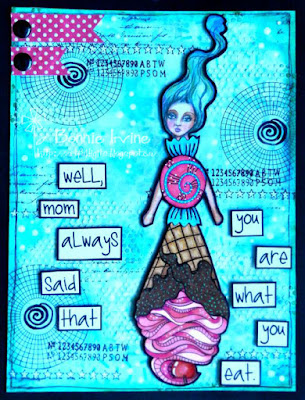 Hi everyone! I'm back this week with my response to the Week 2 Joggles AJA prompt which is  "My rap name is Li'l Hungry"...include food in your design. I wanted to put together a collaged image using some food clip art for the body. Of course, I had to alter the clip art to make it suit my style. You know I have to play :) 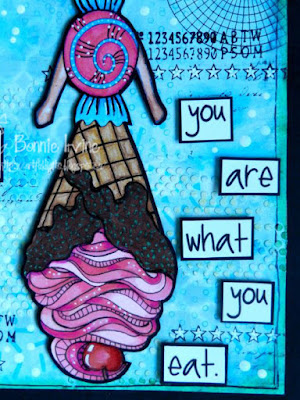 I printed the ice cream cone and candy piece which I had purchased as part of a package from an Etsy seller called Kenna Sato Designs. The original style was really pretty but it was in pastels and also lacked the whimsical detail I wanted for the dress. Never fear...markers, paint pens, sparkly gel pens, and coloured pencils to the rescue :) I intensified the colour of everything, adding shading, lines, and dots to make the elements more playful. 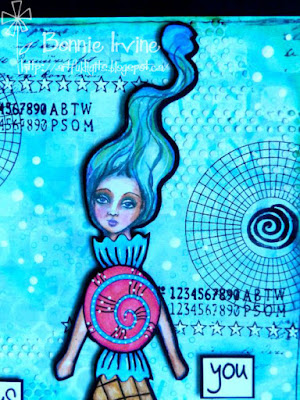 Next I went searching for a head and arms which would fit both the size and style of the body I had created. That lead me to the Art by Marlene Die-cut block images. I fussy cut the head, neck, and arms from one of the images, gluing them to the candy body. The entire image was then edged in black Big Brush Pen, and adhered to black cardstock which was trimmed again leaving a narrow black border. Foam tape was applied to the back and she was set aside to await her background. 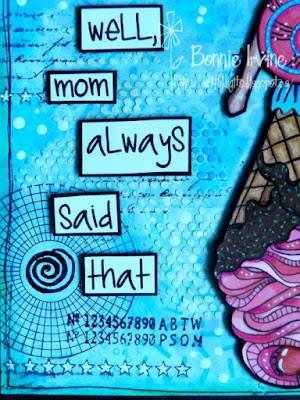 The 6 x 8 inch mixed media page was spritzed with Lindy's Jack in the Pulpit Teal Starburst spray and allowed to dry. Lindy's Delphinium Starburst spray was spritzed through Carabelle Studio For the Love of Layers stencil and allowed to dry. To knock back the colour and pattern and push them into the background, watered down white chalk paint was added over the entire page. Once dry, full strength white chalk paint was applied through Joggles Twaddle stencil in several places. Manganese Blue Archival Ink was added through Ranger Party Time Letter It stencil to mimic the sprinkles on the ice cream in the dress, as well as stamping with it using Wendy Vecchi Open Dots stamp. Jet Black Archival Ink was used to add stamps from Studio Light (numbers), Joggles (text), and Viva Las Vegas (circle, stars, and swirl). White Posca Paint pen was used to colour in the stamped stars to brighten the background. For additional texture and dimension, Ranger Texture Paste was scraped through TCW Tiny Dots stencil. 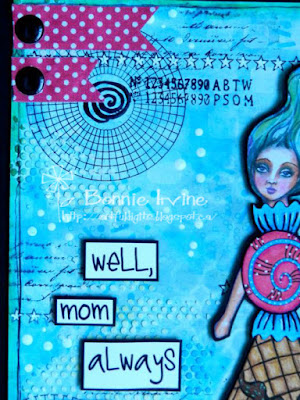 The wording was printed on white cardstock, cut apart, and matted with black before being popped up on foam tape. Snow Cone Gelato was smudged here and there mainly towards the inside of the page and Spearmint Gelato was used to darken the outside edges, again smudged with fingers.A doodled border was added around the outside edges and white paint dots were added to further brighten the background. To pull some of the pink from the image, pink dotty fabric tape was adhered to the top left corner along with black enamel dots. As usual, the page was adhered to black cardstock to serve as a frame.

Thanks for dropping by today. That was just awesome! To see how the other members of the Joggles Art Journal Adventure community respond to the prompt or maybe to play along yourself, be sure to join the Facebook group. We would love to have you along for the fun :)