Who's With Me? ~ Inspired by a Vera Lane Studio image 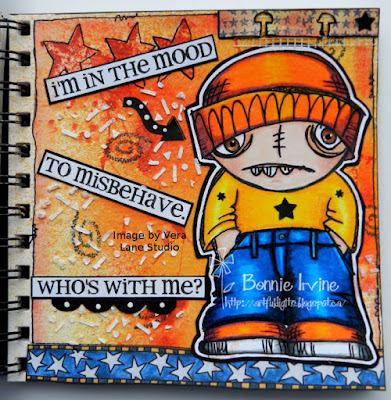 Hi everyone! I was in a colouring mood so I grabbed a Vera Lane Studio image (of course), coloured him up, and then created a mixed media background so he would have a place to hang out. The image comes from a set called L'il Gangstas and comes with this guy called Doggyfish, his buddy Trainjumper, 2 smaller elements, and 2 sayings. I had my own saying in mind to help tell his story on this page. 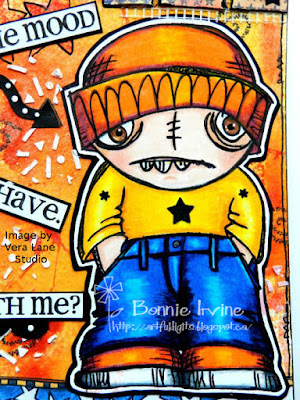 I coloured Doggyfish using Prismacolor and Polychromos pencils and adhered some punched stars to his shirt to repeat other stars on the page. He was fussy cut leaving a narrow white border, matted with black, and trimmed out a second time leaving a narrow black border. 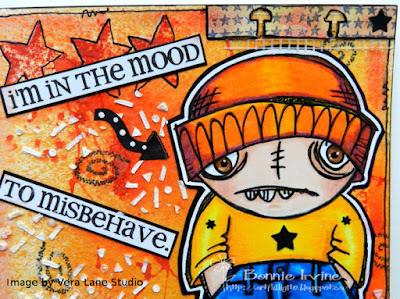 The background colour of the 6x6 inch watercolour page was created by spritzing the page with 4 colours of Lindy's Starburst sprays: Yellow Rose of Texas, California Poppy Gold, Marigold Yellow Orange, and Hag's Wart Orange. The last one was used sparingly and blown around the page with the TH spritzer tool. A distressed star stamp (no idea what the source is) was added to the page using Vermillion Archival Ink and the Stampotique Dot Swirl was added with Cobalt Blue Archival. Texture Paste was scraped through Ranger Party Time Letter It stencil and then brightened with white paint pen once it dried. It had picked up the Starburst spray colours so this brings it back to its original white colour. 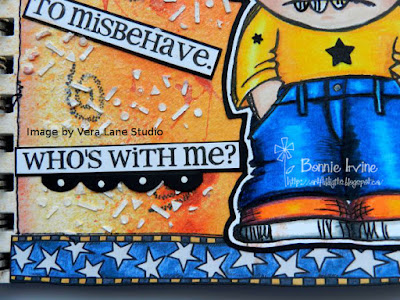 Before Doggyfish was adhered to the page, a Kate Hadfield border was fussy cut and glued along the bottom of the page to ground him. A punched scrap of white cardstock was stamped with a Carabelle star stamp using Cobalt Archival Ink. Colour was added to this strip using the Lindy's colours as well as red Gelato. Black Big Brush Pen was used to outline it before it was adhered to the top right corner over a scrap of drywall mesh. 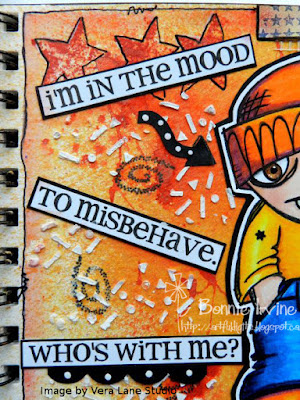 The wording was printed onto white cardstock, cut into sections, and matted with black. A black punched border with white paint pen dots was glued beneath the "Who's with me?" section to add emphasis. A fussy cut arrow was given the same treatment and placed so it was pointing at Doggyfish, and another punched star was adhered to the top right starry strip to complete the diagonal line of 3 black accents. A doodled border shaded with red Gelato and water was added to the outside edges along with Black Big Brush Pen to darken the three sides of the page.

Thanks for joining Doggyfish and me today...if not for the misbehaving part, at least to meet him in his natural habitat :)