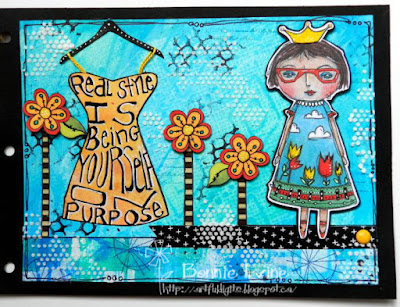 Hi everyone! It's week 4 for the 2019 Joggles Art Journal Adventure and the theme this week is " Calories: Tiny creatures who live in your closet and sew your clothes a little tighter each night". We are being challenged to feature  closet gremlins, dieting, clothes...whatever this saying conjures up for you. I opted for clothing and stretched it even further to Style. I love when people buck the trends or fads and stay true to their own style, not worried about what others think. Funky and unique are fun :) 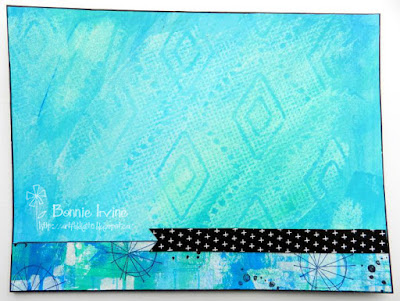 I decided to experiment with texture for this background. I had some watered down acrylic paint from another project and didn't want to waste it so I slapped it on a 6x8 inch piece of mixed media paper. While the three Liquitex paint colours (Cerulean Blue Hue; Light Blue Permanent; Bright Aqua Green) were still wet, I put the textured or patterned side of a paper towel don over it, waited a few seconds and then lifted it up. It left the most delicious diamond pattern which I dried immediately with my heat tool to preserve it. I added a previously decorated Sticky Snippet strip to the bottom edge and a length of black washi with a cross pattern overlapping one end. 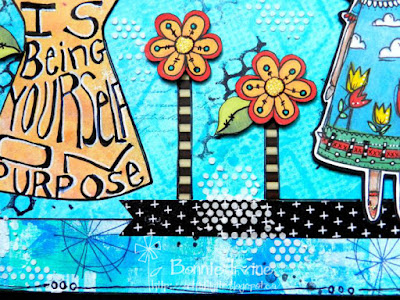 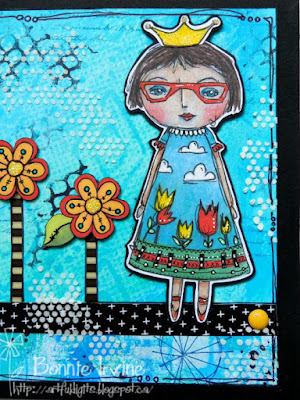 The girl is an Art by Marlene die cut. She was beautiful as is but I wanted to make her my own so I used coloured pencils, Posca Paint Pens, and black Pitt Pens to add shading, doodling, and to intensify some of the colours. The crown, another Art by Marlene die cut, was covered in Diamond Stickles to add that sparkle she deserved. The same Stickles was used on her ruby red shoes :) She was matted with black cardstock, fussy cut leaving a narrow black border next to the white one she came with, and popped up on foam tape to create a natural shadow. The flowers from a clip art sheet, were fussy cut, had the colours changed with Posca Pens, received a little doodling, and Stickles over their centers. They were also popped up on foam tape and skinny scraps of striped paper were used for their stems. 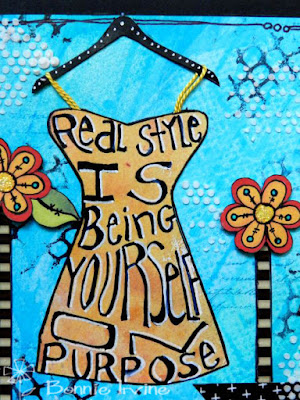 I loved this saying I found but wanted it to connect with the clothing theme visually so I drew out a dress shape onto a Lindy's covered mop up piece of cardstock and then drew in the words in the shape of the dress. Black and white Posca paint pens were used to fill in the lettering. A hanger was cut from black cardstock and embroidery floss was used to make the spaghetti straps to hang the dress. White paint pen dots were added to the hanger to make it more whimsical and less stark. There are dots everywhere so it helped it fit in. 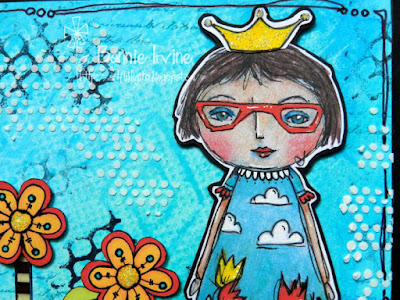 A border was doodled around the outside edges of the page (again with the dots!!) and the very edge was inked with Black Big Brush Pen to remove that white edge that is so distracting. A yellow enamel dot was added to the flat end of the washi to tie in with the other yellows in the images and the entire page was matted with black cardstock to serve as a frame, drawing the eye into the page.

Thanks so much for stopping by today. Be sure to pop by the Joggles AJA Facebook group throughout the next week to see the other creative works of (he)art from the rest of the AJA community. We would love it if you played along.