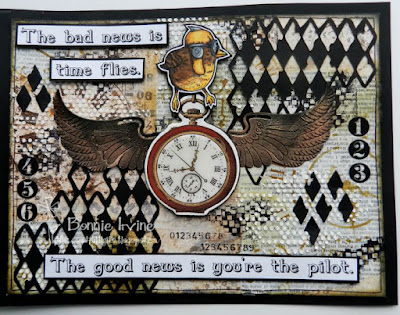 Hi everyone! We're at Week 10 in the Joggles Art Journal Adventure and, in honour of turning the clocks ahead an hour yesterday, our prompt for this week is Time. I chose to use the opportunity to illustrate one of my favourite quotes and feature one of the delightful Carabelle Studio Les Oiseaux stamps. I love their little goggles and hats. 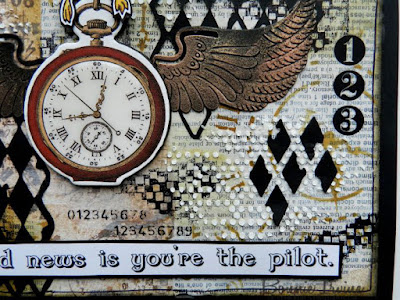 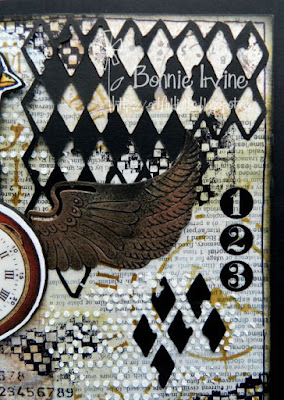 Ranger Texture Paste was scraped through TCW Tiny Circles stencil with a palette knife to add dimension and texture to the background. Because the paste picks up the Starburst sprays, white Posca Paint Pen was used to whiten the dots. A Sizzix Alterations die was used to cut two harlequin pieces from black cardstock which were then glued to opposite corners. Some of the negative diamonds cut out by the die were used to create a pattern in two other spots. A few of the TH number rub-ons were also added both to repeat the number theme and also to add more pops of black texture. 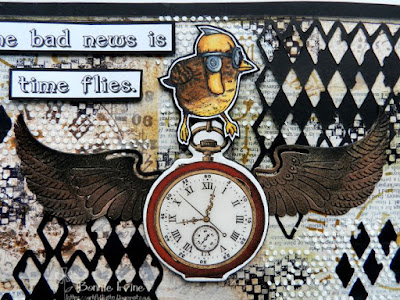 The focal of this page began with a Bo Bunny pocket watch die cut which has been in my stash for evah! I die cut wings from black cardstock using a Cheery Lynn die and highlighted them with Treasure Gold, Copper and Renaissance waxes. Love the shimmer!These were adhered behind the clock and topped by the Carabelle bird which was coloured with Prismacolor and Polychromos pencils. It was then fussy cut leaving a narrow white  border, matted with black cardstock, and trimmed leaving a black border. Glossy Accents was applied to the watch face and the bird's goggles. Foam tape was used to raise the bird to the same level as the watch. 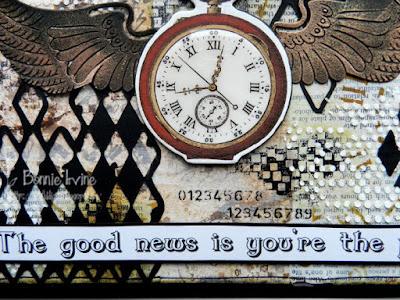 The wording was printed onto white cardstock and matted with black. The sections were popped up on foam tape to add dimension. To finish the page, Coffee Archival and then Jet Black were added to the edges. A border was doodled around those same edges. The decorated substrate was added to the black background page common to the other journal pages.

Thanks for stopping by today. To see the awesome creations from others in our Joggles AJA community, be sure to join our Facebook group. It's a wonderful place to hang out and soak up the friendship and inspiration. Hope to see you there!