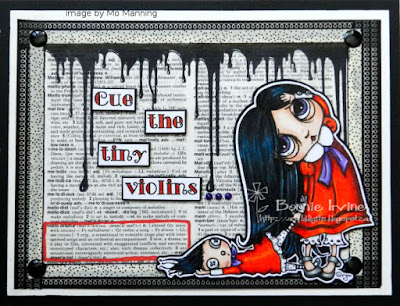 Hi everyone! It's time for the next prompt in the Joggles Art Journal Adventure (Week 9) and this one is an absolute no-brainer for me. The prompt is : Well, aren't you a little ray of pitch black...so we are meant to use black in our creation. Hello...I always include at least a touch of black in my creations and in the rooms I'm decorating. I love how it sets off the other colours, how dramatic it is, and how it can move the eye around the page or the room...contrast, love it! To make this prompt more of a challenge for myself, I decided to go with black moods and the idea of melodrama and pity parties because that makes me smile (just my weird sense of humour). I found the ideal digital image at Mo's Digital Pencil called Woe is Fay...she's just the adorable drama queen I needed. 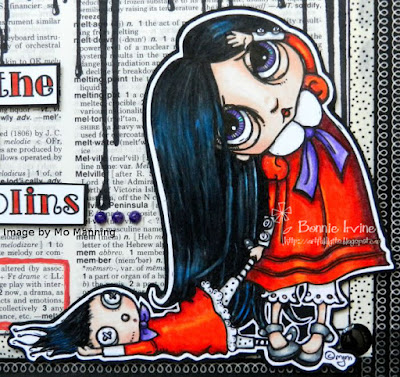 I coloured Fay and her doll with a mix of Prismacolor and Polychromos pencils. They were fussy cut leaving a narrow white border, matted with black cardstock, and fussy cut a second time leaving a narrow black border. Foam tape was used to adhere them, adding dimension and natural shadowing. 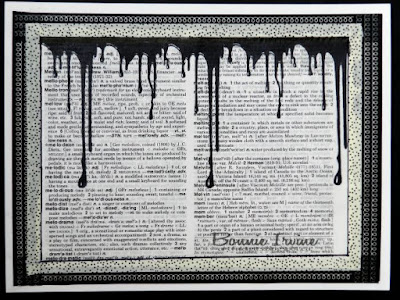 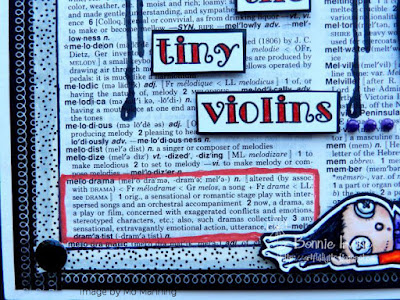 To draw the eye to the word melodrama, and its definition, red Posca Paint pen was used to draw a box around it. This also helped pull some of the red from the image into the background, helping with continuity and repetition. 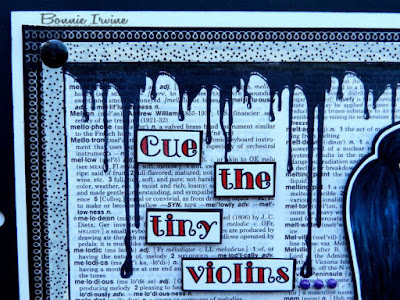 The wording was printed onto white cardstock and the open areas of the font were coloured with red coloured pencil, making a third spot of red and completing the visual triangle. The saying was cut into individual words which were then matted with black and adhered to the page with foam tape. Three purple pearls were added after the quote to indicate the three dots. Black enamel dots were adhered to the corners of the narrow washi tape. The background was adhered to the black page of my art journal which framed the entire page and added yet another pop of black.

Thanks for joining Fay, Dolly, and me today. We appreciate that. To see what the others in our fabulous Joggles Art Journal Adventure Facebook group create as a response to use black Prompt 9, be sure to pop over to the page. We would love to see you there!