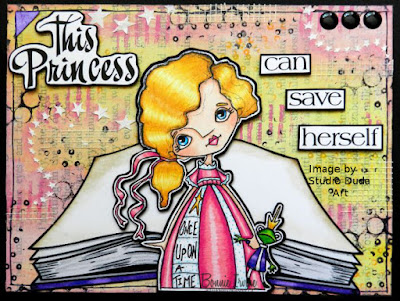 Hi everyone! It's Monday again and that means it's time for another Joggles Art Journal Adventure prompt. The one for this week is "Life isn't a fairy tale. If you lose your shoe at midnight, you might want to cut back on the booze." We can do anything fairy tale related, or shoes, or booze... or... or...whatever it inspires. I chose to go with  the fairy tale idea but definitely an empowered princess...more in line with the Paper Bag Princess :) I decided to feature this fabulous image by Studio Duda Art (Diane Duda) called Frog Princess. I have always loved Diane's art and was delighted to learn that she has released some digital stamps. I want them all! Isn't Frog Princess pretty? 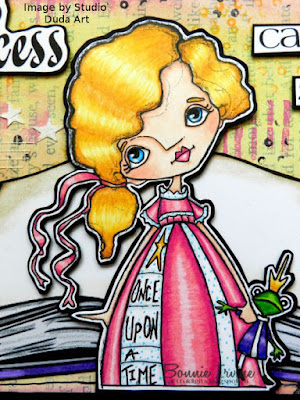 I coloured Frog Princess with a mix of Prismacolor and Polychromos pencils, then did the fussy cut thing with the narrow white border. She was then matted with black cardstock, and fussy cut again leaving a narrow black border. Foam tape was used to pop her up. I wanted her to be standing in front of a big open hardcover book, as if she was writing her own story. I printed a free black and white clip art image, and then coloured it with the same types of coloured pencils, darkening the page edges using Coffee Archival Ink. The book was fussy cut, edged with black Big Brush Pen, ready to be adhered flat to the background. 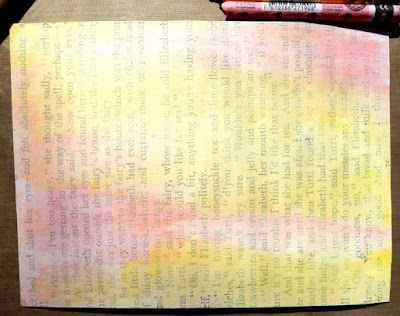 I wanted to use a page out of an old children's book as my first layer of background so I adhered it sideways to white cardstock using matte medium. White gesso was used to knock back the text and give tooth for the next layer of Neocolor II crayons. The gesso also allowed the colour to be moved about with water to get the blending I wanted. 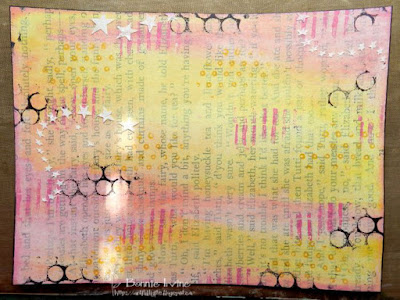 Texture was added using three different stamps from Carabelle Studio 9 Square Textures stamp (I cut it apart to get 9 separate stamps) with Picked Raspberry and Fossilized Amber Distress Oxide Inks, as well as Jet Black Archival. Texture Paste was scraped through a BadAss Mini stencil to create the raised stars. Because the paste picked up the Neocolor II and Distress Oxide colours, I went over the stars with a white Posca Paint pen once the paste was dry. I used a waterbrush and the same pink Neocolor II to darken next to the left side of the stars to help them stand out and add depth. The sentiment was one I had in my stash from Create With TLC. I just printed it twice so I could cut it apart, matted the sections with black cardstock, and trimmed them out, popping them up on foam tape. A border was doodled around the outside of the page with black pen, and the edges were inked with Picked Raspberry Distress Oxide Ink before black Big Brush Pen was added to the edges. To balance out the design and finish the purple visual triangle, a small triangle was cut from purple mop-up paper and adhered to the upper left corner. Bits of drywall mesh were adhered in a few places for a little more texture. Black epoxy circles were added to the top right corner before the background was adhered to the black background common to all my pages in this art journal.

Thanks for joining Frog Princess and me today. We are happy as heck to see you! To check out how some of the others in our Joggles Art Journal Adventure Facebook group, be sure to pop in from time to time. It's an awesome place to hang out!