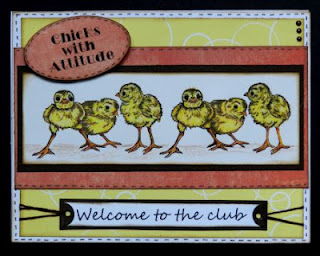 If you have been following my blog, you've probably realized by now that I have an off-the-wall sense of humour which I thoroughly enjoy :) There are so many funny things in this world and I just love that. As soon as I saw this stamp, 3 chicks (J1259), on the Stamp N Plus store site, I immediately thought, "Oh, chicks with attitude. I love them!" instead of the little fuzzy farm animals many people would see. I think it's the way the one is standing with her legs apart and her "hands on her hips"...hey, if chickens have fingers, they must have hands :) Anyway, I added the stamp to my "must have" list because I had a plan. 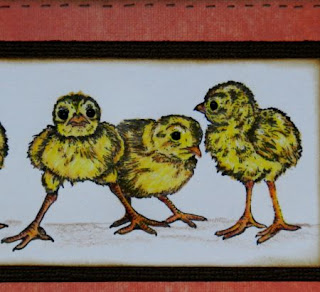 Once I stamped them twice, I coloured these beauties with Prismacolor pencils but didn't use OMS to blend. I wanted the lines to show to create fuzz. Tiny black half pearls were added to give them beady little eyes. The image strip was inked around with Vintage Photo Distress ink and then double matted on brown and coral/orange cardstock. Faux stitching was added to the top and bottom edges of the orange. Yellow cardstock with white circles was adhered to the white card leaving a slight border of white showing. Faux stitching was added to that skinny border

The two sentiments were created using the computer with the top one coloured in with a Micron pen. Again, faux stitching was added to the oval to create repetition which ties elements together. The bottom sentiment was mounted on brown cardstock and a 1/2 inch circle of the same brown was added to the short ends. These circles were punched and threaded with embroidery floss which was glued to the back of the yellow layer before it was adhered to the white card. Three small flat pearls were added to the top right corner of the card for balance. The oval sentiment was popped up on foam tape for dimension.

Do they not make you laugh? Can you not think of at least one person who would love to receive this card? I know I sure can! Thanks for checking out my post today. I hope it gave you a smile.

he he they sure made me chuckle hun love them they are super cute,and great layout too,hugs Cherylxxxx

BAHAHAHA!!! I'd be in that little flock...might be the Mother Hen of it! This is so stinking cute!!!