Hi everyone. I'm here today to share the next couple of spreads in my chipboard Mad Tea Party book featuring a few of Rick St. Dennis' many fabulous Alice in Wonderland images. Since all of the backgrounds were created in the same general way which I explained here, I won't go into that today. Instead I will jump right in with the next two pages about The Mad Hatter. 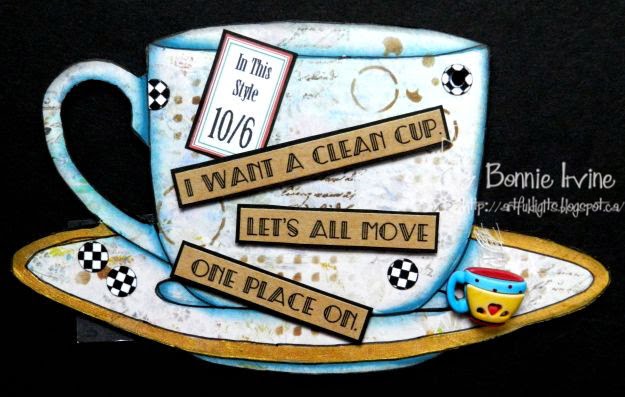 The left page which is the backside of the Alice page was used to feature a quote from Hatter as well as a few related embellies. The quote, taken from the Lewis Carroll book, was computer generated and printed on kraft cardstock, matted in black, and popped up on foam tape. A hat tag was printed from an Etsy file, matted in black, and tucked under the quote. A small whimsical teacup button was attached to the right side of the saucer with a scrap of cheesecloth added for the steam. Small circles were punched from the harlequin washi tape attached to white cardstock. This pattern repeats throughout the book, lending continuity. 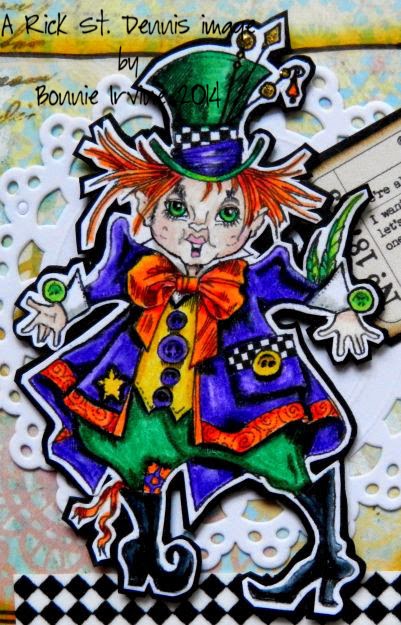 The right page uses the Mad Hatter  image which can be found in Rick's Zibbet shop. It was coloured with Prismacolor pencils and Goldenrod Stickles were added to the hat pins for a little sparkle. It was fussy cut leaving a white border, matted in black cardstock, and fussy cut again. before Hatter was adhered to the teacup with foam tape. 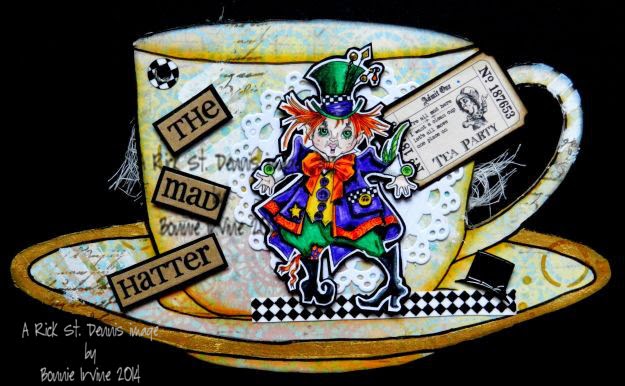 A small doily, another recurring detail, was placed behind him. A tea party ticket from Vectoria Designs was matted in black and tucked underneath him. More of the washi/white cardstock tape was added to give him a place to stand and bring that pattern to the page. A hat brad with its legs removed was adhered to the washi tape with foam tape. 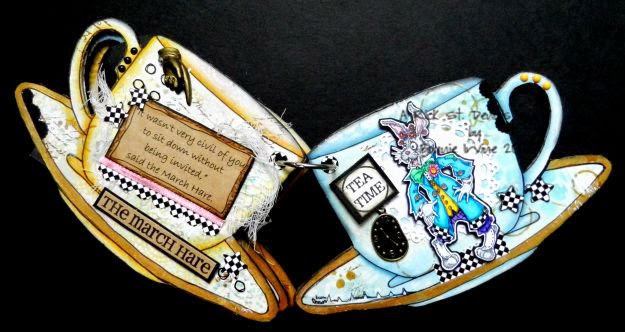 The next 2 page spread is dedicated to the March Hare. The left side contains one of his quotes from Lewis Carroll's book. This was printed on kraft cardstock, the edges of which were distressed, and then edged with Vintage Photo Distress ink. 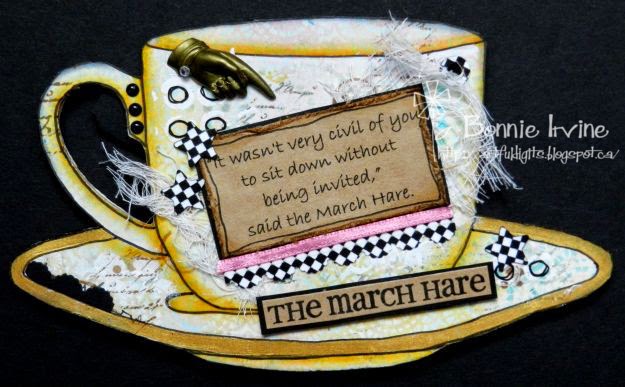 It was then matted in black and a scalloped border was punched from the washi tape/cardstock combo. A narrow pink ribbon was layered over that to bring some of the pink from the image to this page. Stars were punched from the harlequin pattern, edged with Black Pitt pen, and adhered to the page. Cheesecloth was added beneath the two corners of the quote layer. The final touches were to add a tiny piece of black scalloped border, three black enamel dots on the handle, and a resin hand pointing to the quote.

The right page of this spread features the March Hare, one of my favourite RSD images which can be found in Rick's Zibbet shop. I coloured him with Prismacolor pencils and fussy cut him leaving a narrow white border. He was then matted with black cardstock and then popped up on foam tape. 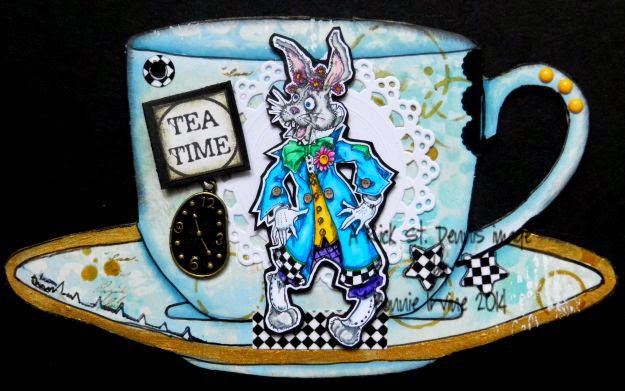 The March Hare was also layered over a small doily and a length of the harlequin tape was used to ground him. More small stars and a scalloped border were punched and adhered in order to tie the two pages together. yellow enamel dots were added to the cup handle and a clock charm was added to the bottom of a tea time sign.

That's it for those two spreads...can't wait to work on the next ones! Thanks for visiting today. Hatter, Hare, and I are delighted you did.

Bonnie - these are brilliant. Love the hare and the Mad Hatter is stunning! Wonderful work!

Oh heavens I LOVE this!!!