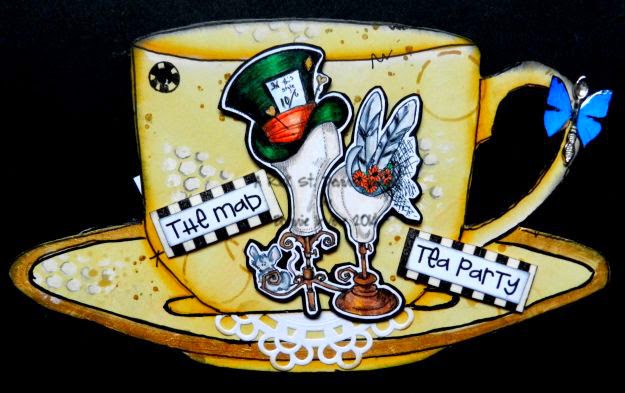 Hi Everyone! Those who know me also know that I have a huge love for anything related to Alice in Wonderland. I have had these chipboard teacup shapes in my stash for absolutely ages. They are 4" high and 6.5" wide at the saucer and came 4 to a pack with holes punched and a binder ring connecting them. I have coloured several of Rick St. Dennis' Alice characters individually but this seemed like the ideal substrate to use for combining them into a mixed media book focusing on the Hatter's tea party. Today I want to share the cover and the Alice pages. 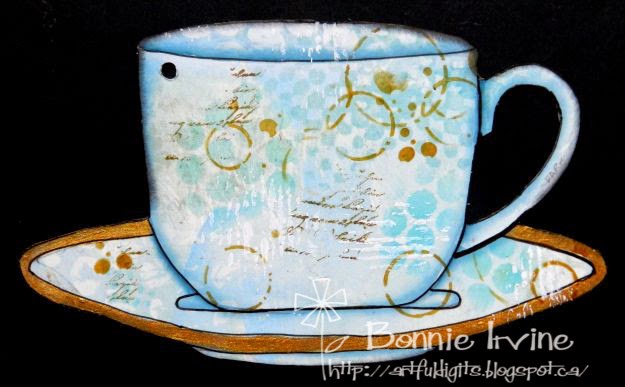 I began all cups by adhering designer paper to both sides with matte medium, trimming the excess away with a craft knife. The raw edges were inked with a Black Big Brush pen. The teacup details were hand drawn and a template was created to transfer them to each cup. Shading with acrylics and chalk paints was added and the details were further emphasized with a black Micron pen. The gold band on each saucer was also added with acrylic paint because this is a very elegant tea party using only the best china :) Stencilling, stamping, and doodling were then added to each background. 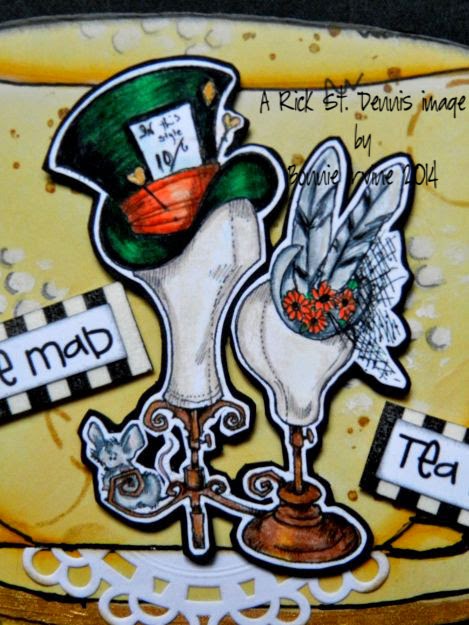 The cover of the Tea Party book features one of the three Hat Shoppe images which can be found in Rick's Zibbet shop. It was coloured with Prismacolor pencils and fussy cut leaving a narrow white border. Black matting was behind that to add contrast to the background and it was popped up on foam tape. A small piece of doily edged with Vintage Photo Distress ink was added at the base of the image. The sentiment was computer generated, inked with Black Soot Distress ink, and matted with black and white washi tape adhered to a white backing. The two sections were popped up on foam tape for dimension and to create shadow. Absolom in the form of a butterfly was fussy cut, coated with Glossy Accents, and given a tiny metal spoon body to fit the tea theme.

The back of this first teacup becomes the "title page" for Alice's teacup. When the book is opened you see both pages together. I wanted the character name and a quote from the story on this page. 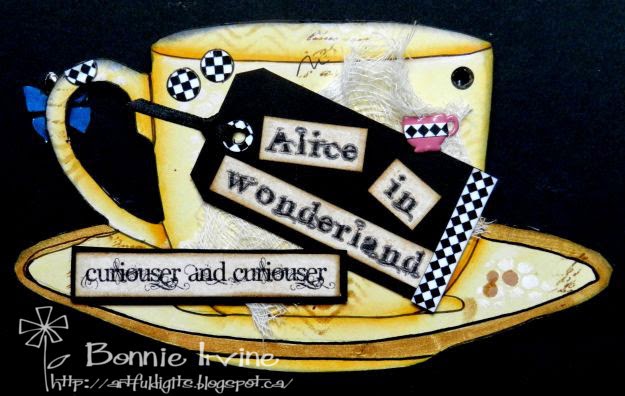 A tag was cut from black cardstock and the wording was fussy cut from a collage sheet from Etsy. More washi tape adhered to white cardstock was used as the border and hole reinforcement as well as the punched circles and band on the teacup brad. A scrap of cheesecloth was adhered underneath the tag. The words curiouser and curiouser were matted in black and popped up on foam tape. 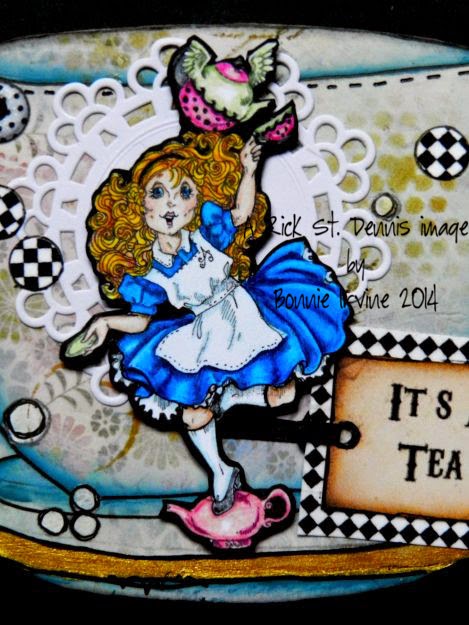 Alice's cup features the Mad Tea Party image which can be found in the Zibbet and Etsy shops. Alice, her cup, and teapots were coloured with Prismacolor pencils and fussy cut. A narrow black border was added with cardstock before Alice was popped up on foam tape. 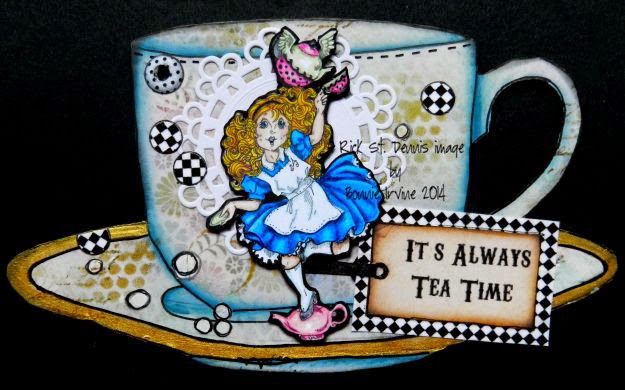 A small doily was placed behind her to repeat the doily used previously as well as draw attention to her. The sentiment from my Etsy stash was fussy cut and then backed by that same washi tape adhered in rows to white cardstock. This pattern ties both pages of the spread together. More circles were punched to scatter this pattern about.

And that's it for the first segment of RSD's Mad Tea Party...lol. Stay tuned for the next spreads coming soon to a blog near you. Thanks for visiting today!

I'm an AIW fan too and I ADORE this project Bonnie!!! Awesome coloring on Rick's images. :-)