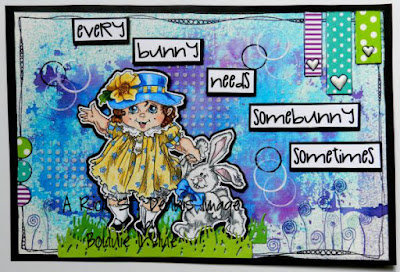 Hi everyone. It's my turn to create a little something for a Rick St. Dennis Fans & Friends Facebook group post. I decided to play with the adorable image from Rick's Zibbet shop called Easter Buddies. I was going to create an Easter card and then decided to make it an all occasion art journal page instead...just to show that these two aren't just for Easter. 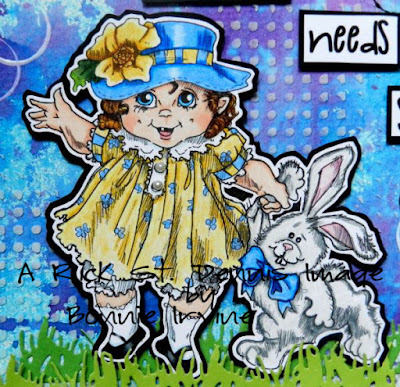 I coloured them with Polychromos and Prismacolor pencils and added flat pearls for her dress buttons. They were then fussy cut leaving my usual narrow white border and matted in black. Foam tape was added to the back of thembecause I like the dimension and shadow that creates. 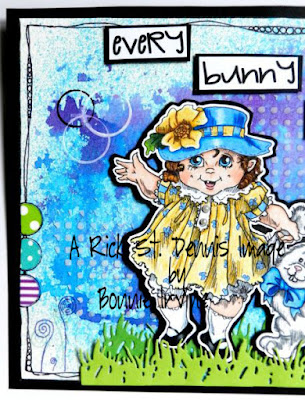 The 6 x 8 inch mixed media paper background was spritzed with Lindy's Stamp Gang Witches' Potion Purple and Delphinium Turquoise Starburst sprays both through TCW's Bingo stencil and directly onto the paper.The paper was tipped to allow the colours to blend in some places. Embossing paste was scraped through Dina Wakley's Plastic Canvas stencil with a palette knife in several areas. Two rows od die cut grass were layered, one behind the Buddies feet and one popped up of foam tape  over their feet to ground them. Three different washi tapes were layered onto white cardstock, trimmed out, and added as strips or punched semi circles. White enamel hearts were added to the ends of the strips and outlined. 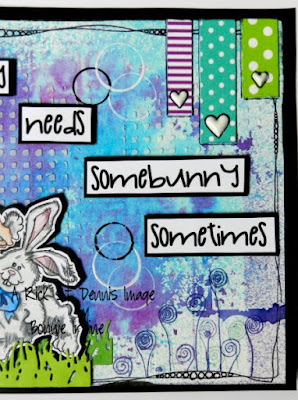 The computer generated saying was printed on white paper, trimmed around and matted with black. Foam tape was used to adhere the words to the background. Can anyone else hear Dean Martin crooning this or is it just me?? A doodled border was added to the outside edges and Black Big Brush Pen lined them as well. I always try to bring that onto the front a little because I like that messy uneven look.To fill in the "foliage" on either side of the grass, Stampotique's Curly Stalks stamp was applied with both Forget-Me-Not and Deep Purple Archival Inks. To complete the page, a black mat was added to the back to frame it.

Thanks for joining the Buddies and me today. We are always happy to have you visit. To see more inspiration pieces from Rick's EDT members as well as his fans & friends, be sure to stop by the RSD Facebook group each day. There's always something new to see.

Absolutely love this art journal page you made. So much to see - like visiting a fantasy place with lots of sunshine and flowers. Love all the details! You have inspired me to try a journal page! Hugs