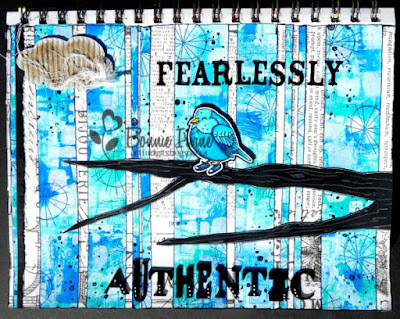 Happy 4th of July to all my friends in the US!

Today I am sharing my response to Joggles Art Journal Adventure Week #26 where Barb's prompt was to use stripes. She also used the long rectangles Sticky Snippets and I decided to follow suit. However, instead of a layered painty background like she used, I decided to cover my journal page with Tim Holtz Melange Tissue Wrap which I applied with gel medium. I wanted black and white text as my background to contrast with my busy and colourful Sticky Snippets stripes. 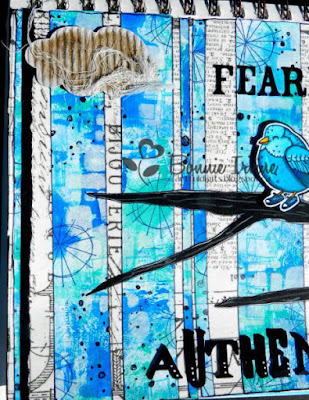 While the Tissue Wrap layer was thoroughly drying, I played with the Sticky Snippets sheet. I had already brayered the entire sheet with three colours of Liquitex Basics acrylic paint: Cerulean Blue hue; Bright Aqua Green; Light Blue Permanent. I used my 2.5 inch brayer and very little paint which I rolled out thinly on mt craft sheet. This is a slow build up of layers and is repeated several times. Joggles Ancient Ruins stencil was placed over the page and white gesso was pounced through the openings in several places. Next, one of the wonderful designs from Stampotique Originals Kate's Doodle Cube was added to the background using Cobalt Blue Archival Ink. I also added Stampotique's Dotted Squares stamp to the Sticky Snippets sheet using Garden Patina Archival Ink. When doing the stamping and stencilling on the Sticky Snippets background, I add more than I normally would to a regular background because I know that the background will be used only in fragments and I want some of the stamping and stencilling on the individual Snippet shapes. 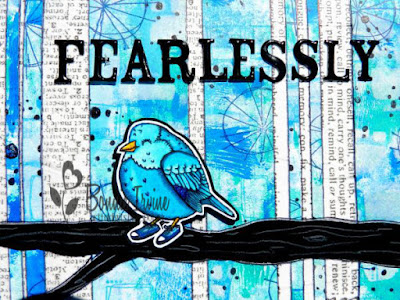 The 1 inch rectangles were peeled from the SS backing sheet and applied vertically to the journal page over the Tissue Wrap background. In order to vary the width of the stripes, I also used the skinny pieces which filled in between the one inch stripes to give me the skinny stripes and the top and bottom sections of the background for the wider stripes. There is absolutely no waste with these SS sheets. Black pen was used to outline the edges of the stripes to accent them. Barb featured black horizontal stripes over her vertical ones but I knew I was going to use a bird image so a branch was drawn on black cardstock and cut out. Gray Prismacolor pencil was used to draw in the bark lines and the branches were edged with Platinum Ink to highlight the edges. Birdy Shoes, another Stampotique Originals stamp, was printed on white cardstock using Jet Black Ink, He was then coloured with Prismacolor pencils, fussy cut with a white border, and matted with black cardstock. Blue Bayou Stickles was added to the dark blue section of his wing. Foam tape popped him up when he was adhered standing on the branch. 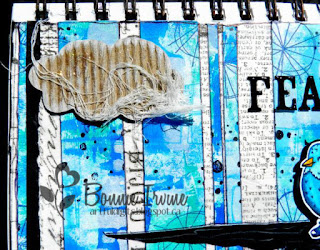 A cloud was die cut from a coffee sleeve and then the corrugated side was edged with gesso. A little extra was sponged over the center area as well. It was applied to the background with foam tape and then Diamond Stickles was applied over the top with a finger. While the Stickles was still wet, a small scrap of cheesecloth was layered over the cloud using the Stickles to adhere it. The words, Fearlessly Authentic, were created with shiny black puffy stickers for the first word, and Ransom Alpha Parts for the second. White paint pen dots were added to the letters of the second word. To better balance the page and add a little black to the left side, a .25 inch strip of black cardstock was torn on one side and then adhered slightly overlapping the first skinny stripe. Outlining was done around the tree branch with black pen and Black Big Brush pen was used to edge the outside edges of the page. 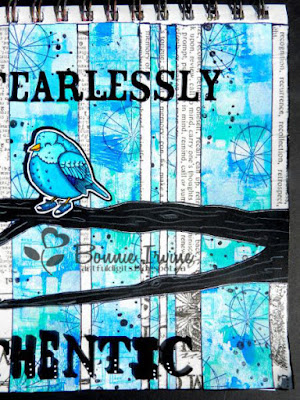 Thanks so much for joining Birdie Shoes and me today. You have brightened our day! If you haven't already been following along with the Joggles Art Journal Adventure and Barb's weekly Monday prompts, it's not too late. You can join in at any point and we'd love to have you join our fabulous AJA Facebook group as well. It's an awesome group filled with creative and supportive people who share the same enthusiasm for this adventure.

Love your page and the detail of how you completed this page.
Yvonne