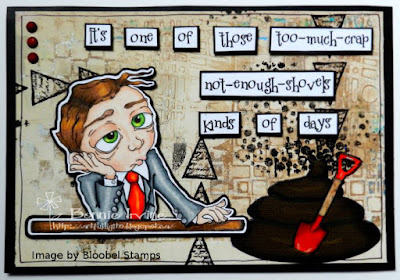 Hi everyone! Each month, Lisa at Bloobel Stamps runs a Progressive Challenge on her Facebook page. If you played along the previous month, you get a discount code for the current month's image so you can play along again. This month the challenge was to use this hilarious Bloobel image called Bored at Work and create something to either amuse him or say what he's thinking. 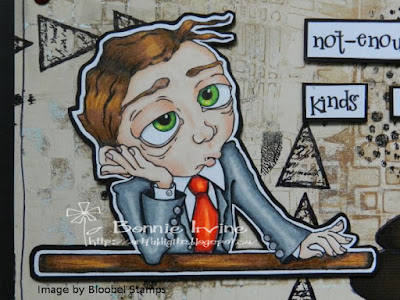 I coloured Mr. B with a mix of Polychromos and Prismacolor pencils, using a metallic gel pen on his silver buttons. He was then fussy cut leaving a narrow white border and matted with black card stock. Once he was trimmed out again leaving a narrow black border, he was popped up on foam tape. The background began life as a 5.5 x 8 inch piece of packaging on which I gel printed with brown and pale blue acrylic paint. I know for sure that Carabelle Studio Squares and Circles Art Template was involved as well as TCW Microbial stencil and black paint. I can also tell you that I used a VLV triangle stamp. Beyond that, I haven't got a clue...I do a bunch of backgrounds all at once and sometimes I forget to write down the magic formula...LOL. I created the big ol' pile of pooh and the shovel from scraps of cardstock and mop-up papers, shading them with coloured  and Inktense pencils and fussy cutting. I cut a slit in the manure pile so the shovel would look like it was stuck in. 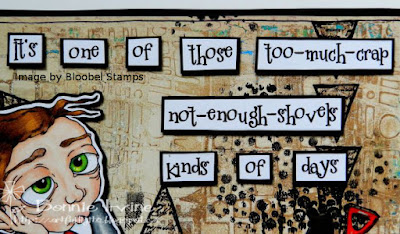 The saying was printed on white card stock, cut into segments, and matted with black. Foam tape was used to adhere the parts to the background. A simple border was doodled with black pen and three red gems were added to the top left corner to play off the shovel and his tie. Finally the piece was matted with black card stock to frame it and tie it all together.

Thanks for visiting Mr. B and me today. I hope your day is going better than his! You still have a couple of days to enter Lisa's Progressive Challenge which you can find on the Bloobel Facebook group. I can see so many other ways to use this image. Check out the other fabulous entries while you are there!